“It’s important to realize there are no positive stereotypes, as they strip people of their individuality,” junior Téa Baum said at a panel held during B-block of International Day last Thursday. During the panel, students of different races and ethnicities spoke about their experiences with stereotypes and self-image.

Junior Maria Herwagen and sophomore Emiliya Aleksanyan moderated the session, asking the group questions about their experiences regarding race and culture.

The panelists discussed standards of beauty for people of different ethnicities. Senior Sheil Mehta talked about his experience seeing skin-bleaching products for people of color. “It’s a fundamental issue with how we perceive beauty,” he said. 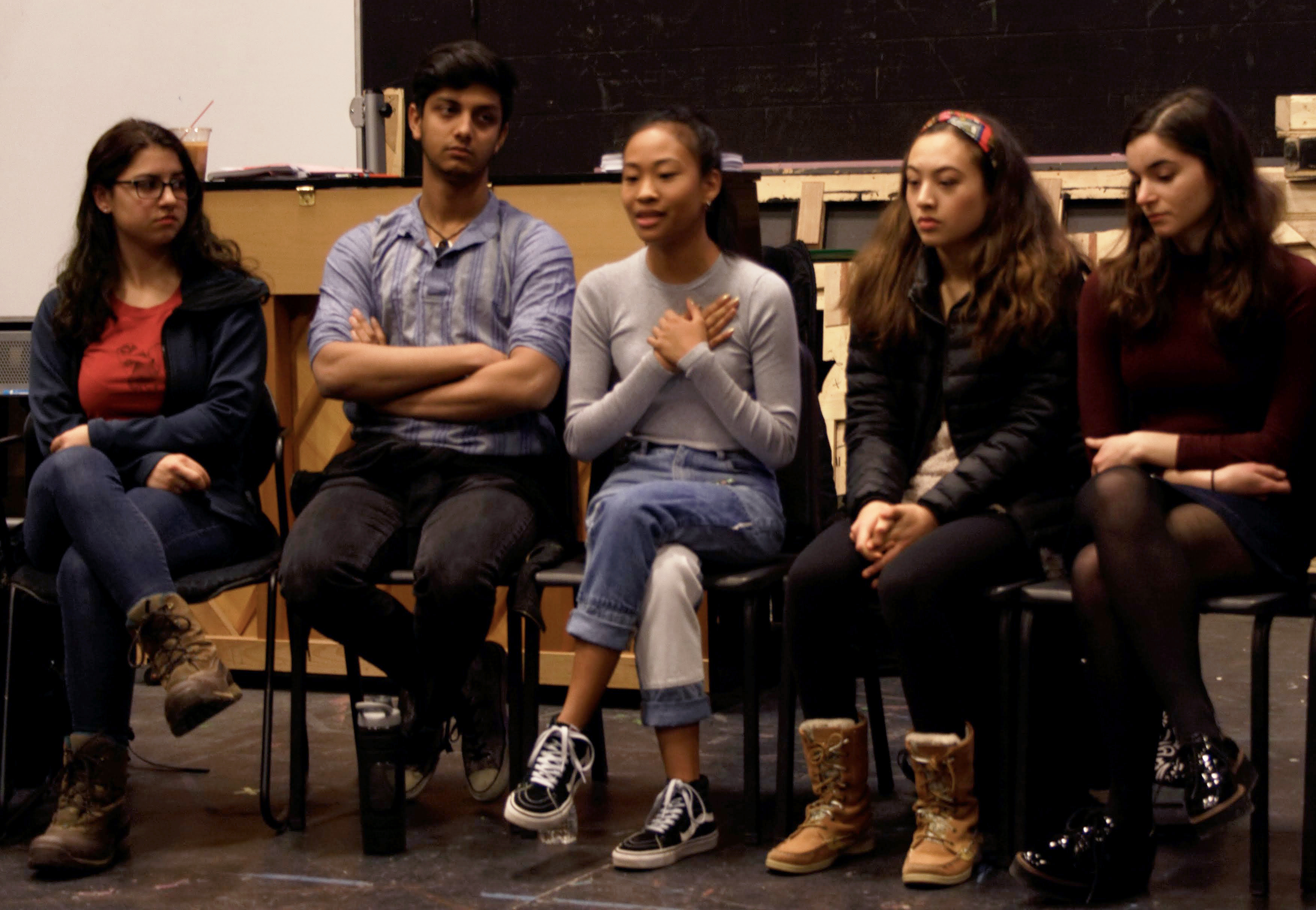 affection to lighter-skinned children. “It breaks my heart to see little boys and girls running around and not getting affection.”

Races and cultures portrayed by the media was also discussed by the panel, and Mehta said, “Growing up, there was no leading hero that looked like me. When you only see yourself in one light, you submissively have to play that role.”

Baum explained that in the media, Asians are often portrayed as being smart. “I want to earn being smart,” she said.

The panel ended with the students talking about their experience at North. The students talked about curriculum, specifically that European and American history tend to be the focus of history classes. Sophomore Lalia Plaster said, “If you want a diverse community, you have to teach diversity.”

Students led an open forum and question-and-answer session regarding what it is like to live in the U.S. as someone who identifies as a minority, during C-block of International Day on Thursday.

The block started with a showing of a video created by TV productions discussing stereotypes about foreign ethnicities and the effect they have. For example, the ignorant declaration that “All muslims are terrorists,”which senior Seika Ghavidel called harmful. Some comments were more comical. Sophomore Colin Foley said, “People view Italians as being big and fat…” and added with a laugh, “…which I guess is true sometimes.”

The panel discussed various topics, ranging from the presence of foreign cultures in the media and music, to the struggles and benefits of being of international descent in the U.S., and how that affects their lives at school and at home.

Senior Carrieanne Mamba described one of the many benefits of having lineal ties to an international country.  “I have the best of both worlds, since I identify as part of different cultures. I have access to multiple different kinds of recipes, holidays, and traditions,” she said.

Some of the students, however, explained that they feel disconnected from their cultures. Senior Karl Adrianza reflected on how his parents, who were born in Venezuela, often hold contrasting beliefs to his own. “I really had to make peace with the idea that my parents, who are traditional Catholics, have completely different values than I do, because I identify more as a liberal,” he explained.

Mamba, who identifies as Filipino, explained that she worries about whether future generations of her family will lose connection to their cultures. Mamba said, “In the future, I wonder if my kids, and their kids after that will have the same ties to my Filipino roots as I do, and that thought scares the hell out of me.”

Mehta echoed Mamba’s statements, and said “My kids probably will not speak Hindi unless I marry an Indian woman, which makes me feel uneasy.”

The panel then discussed their experiences with bringing in foreign food to school, which Mamba dubbed “the lunchbox moment.” Mamba recalled bringing in Filipino food for lunch multiple times during elementary school, and said that some of her fellow students had looks of disgust on their faces when they saw her food.

Mehta comically added on to Mamba’s experience by saying, “You could be the most racist person alive, but how could you hate chicken tikka masala.”

The booths were part of International Day and each contained food and information about cultures from a variety of different countries. 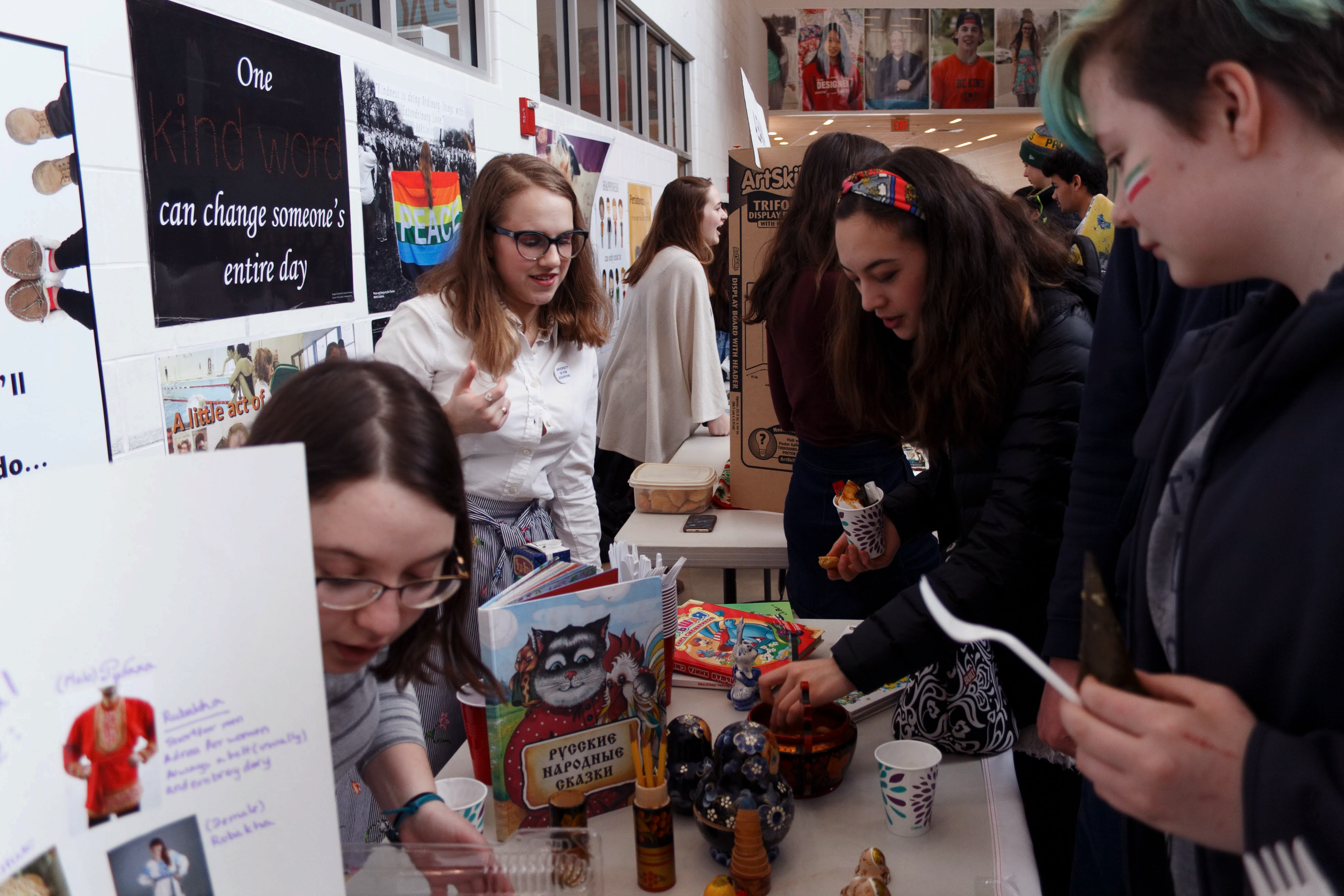 “I want people to take away from today an understanding of the diversity of cultures around the world and especially in this school,” said freshman Gabriel Sanson. “All of these countries have great things that people don’t know about.”

Sanson ran the Mexican booth and presented Mexican food and candy as well as pictures of places in Mexico.

The booth for Finland contained the Finish flag as well as cake baked from a traditional Finish recipe, according to junior Laila Plaster, who operated it.

“We have a very diverse population at our school, and there are a lot of places people don’t know about, one of them being Finland. There’s a lot of really interesting Finish culture that isn’t known about,” said Plaster.

Senior Carrieanne Mamba, who ran the booth from the Philippines, said that her goal was to give people an appreciation and understanding of Filipino culture.

“People don’t really have preconceived notions about the Philippines because we’re very underrepresented.” She added, “Today is about giving exposure to different cultures that people might not be aware of.”

Students participate in March For Our Lives Boston