Powderpuff football plans started at this school after cancellation at South 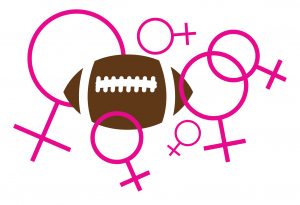 Over the past few weeks, the long-standing tradition of a Powderpuff football game, an all-girls touch football match at South, was terminated by principal Joel Stembridge. The recent news at South about Powderpuff even made some students at this school start thinking about a game.

Stembridge cited two reasons to stop Powderpuff, stating the injuries caused by the game and the concerns over sexism, as only females play in the game, and the males are cheerleaders for the game.

According to athletic director Tom Giusti, Powderpuff was also a tradition at this school, but ended in 2009.

Senior Emma Tavolieri said that the seniors at this school would definitely like to have a Powderpuff game.

Senior Athena Lyons had a similar opinion. She said that “our grade just either wants to start a new tradition or pick up on the tradition again because I don’t even remember the last time this school has done a Powderpuff game.”

Many South students gathered together for protests against the removal of the game. Thursday, Sept. 12, the senior girls wore their Powderpuff jerseys and the rest of the school wore their school colors, “proving how much this event means to the entire school, and not just the upperclassmen,” according to South senior Sasha Restrepo.

On the following day all of the seniors wore black, “which is a tradition the day before the Powderpuff game,” according to South senior Gabrielle Woodberry.

A senior at South, who requested to stay anonymous, said, “Powderpuff has been held as a tradition for many years and we all cherish and look forward for our class to play. Having this tradition be taken away is devastating.”

In addition to wearing all black, some senior girls skipped class and went out to the courtyard to play football.

Also, a student at South created a MoveOn petition directed toward Stembridge in efforts to reinstate the Powderpuff game. The petition has gotten over 420 people from across the country to sign it.

Woodbury said she loves the spirit and energy of Powderpuff.

“My favorite thing about Powderpuff is the spirit and energy. It’s what makes high school, high school,” said Woodbury. “Without it, I feel like South is becoming less of a high school than it already is, excluding academic aspects.”

Another senior girl at South, who requested to stay anonymous, had a similar opinion. “My favorite thing about Powderpuff is that our entire school comes together and you can really feel the school spirit everywhere around you. There’s nothing wrong with a little friendly competition.

Editor in Chief: Maxwell is a junior at North. If he's not in the Newtonite room, you might find him on the soccer field refereeing games, working at the Museum of Science, or working in the Theatre Ink office as a Student Producer Coordinator. He has a passion for science and hopes to pursue that passion in his post-secondary plans.

The Student Foodie: Popcorn, beyond the butter