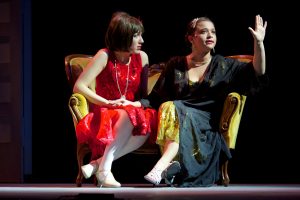 Click here to read a feature addressing the stereotypes portrayed in this year’s musical.

Whether it’s your first day at a new job, or your first day at your new school, we all know what it’s like to be relatively out of place in a situation, and we all know the excitement and eagerness that comes along with it. Such is the case with Millie Dillmount, who seeks a new lifestyle in her new home: New York.

1920-styled actors sang and danced their way across the stage as part of the cast of this year’s musical, based on the 1967 movie by the same name, “Thoroughly Modern Millie.” The show will go up tomorrow, Friday and Saturday at 7:30 p.m. and Sunday at 2:00 p.m. in the auditorium.

Directed and choreographed by English teacher Brad Jensen, “Thoroughly Modern Millie” captured the energy, emotion, and humor that are so crucial to the storyline.

Millie Dillmount, played by senior Maddy Waters, is a young woman from Kansas who came to New York looking to make a new life for herself. She is lost but excited, and that is perfectly depicted to the audience through the songs “Not for the Life of Me” and “Thoroughly Modern Millie.”

Both these numbers were amazing because the choreography was kept so in sync the audience could not keep their eyes off the group.

After, Millie enters an Asian-styled hotel, “Hotel Priscilla,” run by the creepy Mrs. Meers, played by senior Kelsey Fox. The hotel manager, who is pretending to be Chinese, tricks young, unknowing, orphan females into staying at her hotel, and later ships them off to be sex slaves in the East.

Mrs. Meers is a character whose personality is based completely on Asian stereotypes. Fox, however, does a tremendous job of taking on this humorous role, vividly clarifying to the audience that she is not making fun of the culture, but satirizing the stereotypes. 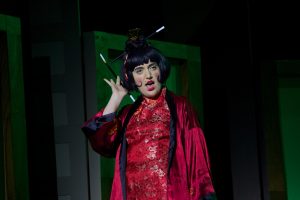 The set perfectly complemented the mood of each scene. The “Hotel Priscilla” lobby set, which included colorful wallpaper and a front desk covered in Asian-styled fans and art, was one of the first sets seen by the audience, and also one of the most interesting.

“Not for the Life of Me Reprise” is a number sung completely in Cantonese by seniors Ezra Dulit Greenberg and Hiroki Shibuya.

The actors play evil Mrs. Meers’s bellhops at her fake hotel. This number, as well as the actors’ performances, were utterly amazing. Clearly, so much work was put into learning the lines and song lyrics in a completely different language, and this aspect really complemented the show.

Miss Flannery, played by senior Emily Clott, and Millie sang the entertaining and catchy, “Forget About the Boy,” the first song of Act Two. The audience was bouncing their feet to the beat, and the audience will surely find themselves singing the lyrics tomorrow morning.

During the choreography in “Only in New York,” all eyes of the audience steered toward junior Jonathan Gomolka, a part of the male ensemble, who leapt on stage, front and center, and performed a triple turn with plenty of enthusiasm.

The audience watches Millie become “modern” as she goes to big city parties, and tries to conquer love with big corporate managers.

The musical ended with a large plot twist that leaves both the audience and the actors laughing hysterically.

Both the director, the actors and the crew did a phenomenal job in this absolutely spectacular show, that should, without doubt, be seen by all.

Seating is reserved and tickets cost between $10 and $16 and can be purchased on Theatre Ink’s website or tomorrow during all lunches on Main Street.