As the sound of nearly fifty voices shouting “My body, my choice” rang through the arts courtyard, students rallied in support of the International Women’s Strike US last Wednesday.

According to the event’s Facebook page, the rally was held “to protest all forms of misogyny, white supremacy, colonialism, cisheteropatriarchy, and capitalist exploitation especially manifest in the policies and beliefs of the Trump administration.”

The rally was an open forum discussion where students took turns sharing thoughts and ideas.

According to freshman Cecilia McCormick, who attended the rally, some general themes of discussion were body confidence, gender identity, and unjust treatment.

One of the speakers, senior Nalini Khurana, discussed body confidence and the struggle of going on a run as a female.

“I run a lot and I can assure anyone that, even in Newton, you can’t go on a run without someone honking at you, calling out their window, saying crude things,” she said. “Like don’t tell me you wanna fuck me-that’s not what I want to hear.”

The idea to have a rally came out of a student-activist group chat that was formed after the election, according to Mapes-Frances. The group chat includes the officers of Peace Action, Feminism Club, Black Leadership Advisory Club, Gay-Straight Alliance, Girls Achieving Leadership, South Asian Club, and Asian Culture Club.

For Mapes-Frances, it was important to have a rally because “Feminism is pretty much the only really important thing. I’m an artist and a musician too, but I can’t call myself human first if I don’t recognize and fight for people’s humanity. Everything else is kind of extra.”

Principal Henry Turner also emphasized the continued relevance and importance of this topic. “There are still inequities that women face despite the fact that it’s 2017. One of the speakers talked about the wage gap between men and women, and it’s just staggering that this still exists,” he said.

According to senior Julianna Lakomski, an organizer of the rally, the rally was important because people need to take action against what is wrong. 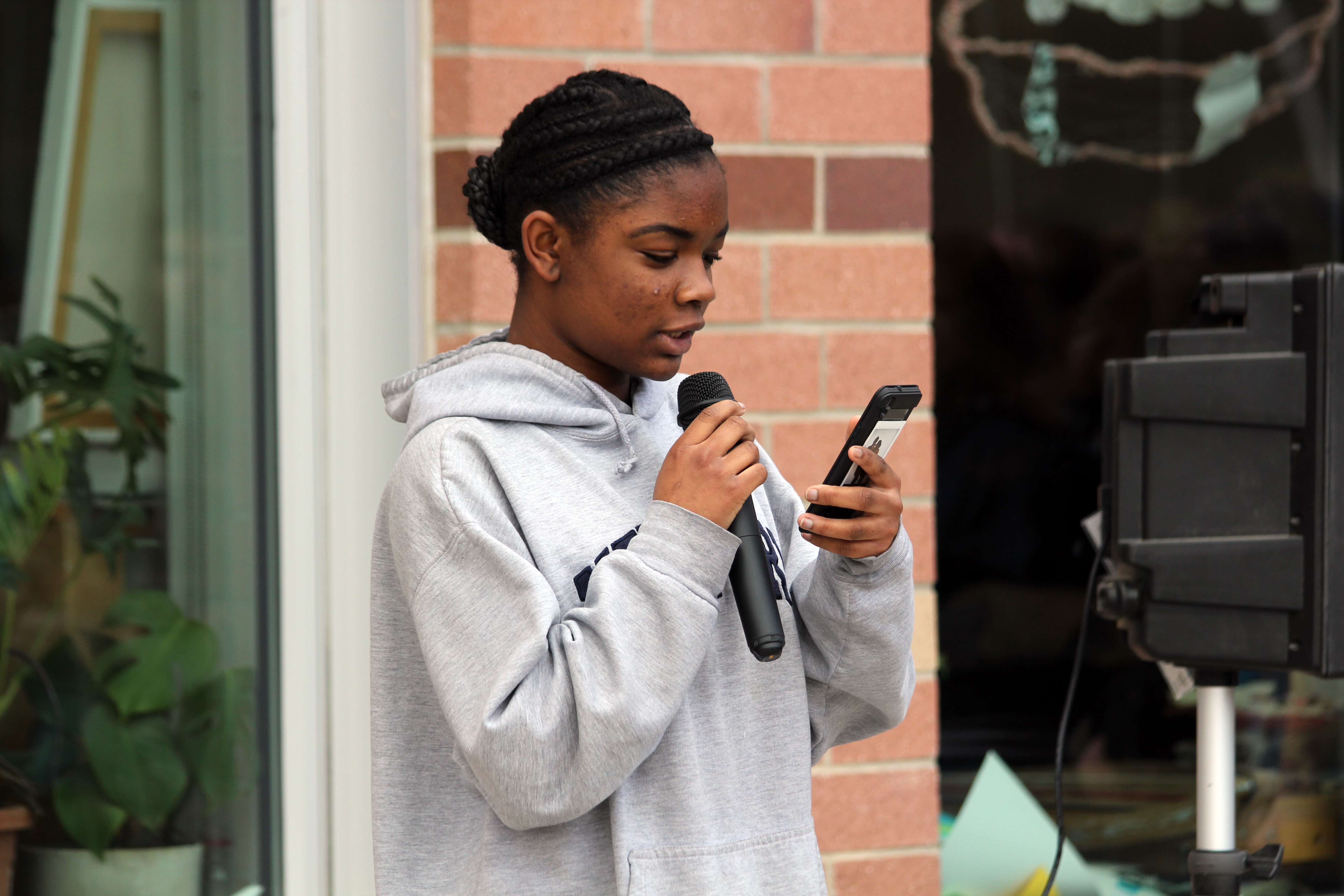 “I want people to generally wake the fuck up and acknowledge oppression, racism, and sexism; get face to face with the fact there’s a lot of shit that goes on that we don’t like to talk about that goes beyond Trump’s administration. It is ignorant to do anything else than take action in whatever way we can,” she said.

Sophomore Maddy Ranalli, a speaker at the rally who discussed how the fight for women’s rights isn’t a one day struggle said, “It was really empowering to stand there and have people listen to what I had to say. I knew I wanted to speak but didn’t have a lot planned.”

“It was important to speak because the state of the country is one that is terrifying for so many women. It is up to us, the more privileged women, to use our voices to create change,” she added.

However, for senior Nattalya Brown, an officer of Black Leadership Advisory Club and organizer of the event, the event didn’t quite meet it’s goal of promoting intersectional feminism.

“It was empowering of course, but it was more empowering to the side of the white women or girls because that experience differs between different races,” she said. She also noted the lack of diversity in the rally.

“It was predominantly whites females in the group that rallied, and it’s heartbreaking because if you think back to the Black Out back in October there was someone from every group represented that day.”

Still, for many students, listening to Ranalli and others speak was an eye-opening and educational experience, making them feel that the rally was successful.

According to Lakomski, a story about a gay friend in Brazil who was alienated by family and friends really stood out to her.

“In upper class America as a whole, and Newton in particular, it is difficult to conceptualize how other women from other countries face oppression so different from what we experience here, and in this case gay women in particular,” she said. “Being gay is hard, and I can’t even imagine what it must be like in a place that is not generally tolerant like Massachusetts.”

Senior Camille Baxter, a member of the audience, echoed Lakomski’s sentiments.“I think going to these things will always open your eyes some way and hearing people share their life experiences is more personal and leaves a more lasting impact,” she said.

“So, I think that I really realized that even though we may not feel oppressed, people are and they live in a society where their oppression is normal so people don’t oppose it and they just settle in and accept it.” she added.

According to junior Sam Kesselman, a member of Feminism Club, “I think that the rally was extremely successful because we were able to hear a lot of unique and diverse voices. I definitely feel a renewed sense that this school is increasingly more welcoming to all backgrounds.”

Turner also felt that the rally was a success. “I thought that there was a lot of good energy and emotion and students feeling like they were articulating their opinions about things,” he said, “I thought it was very successful.” 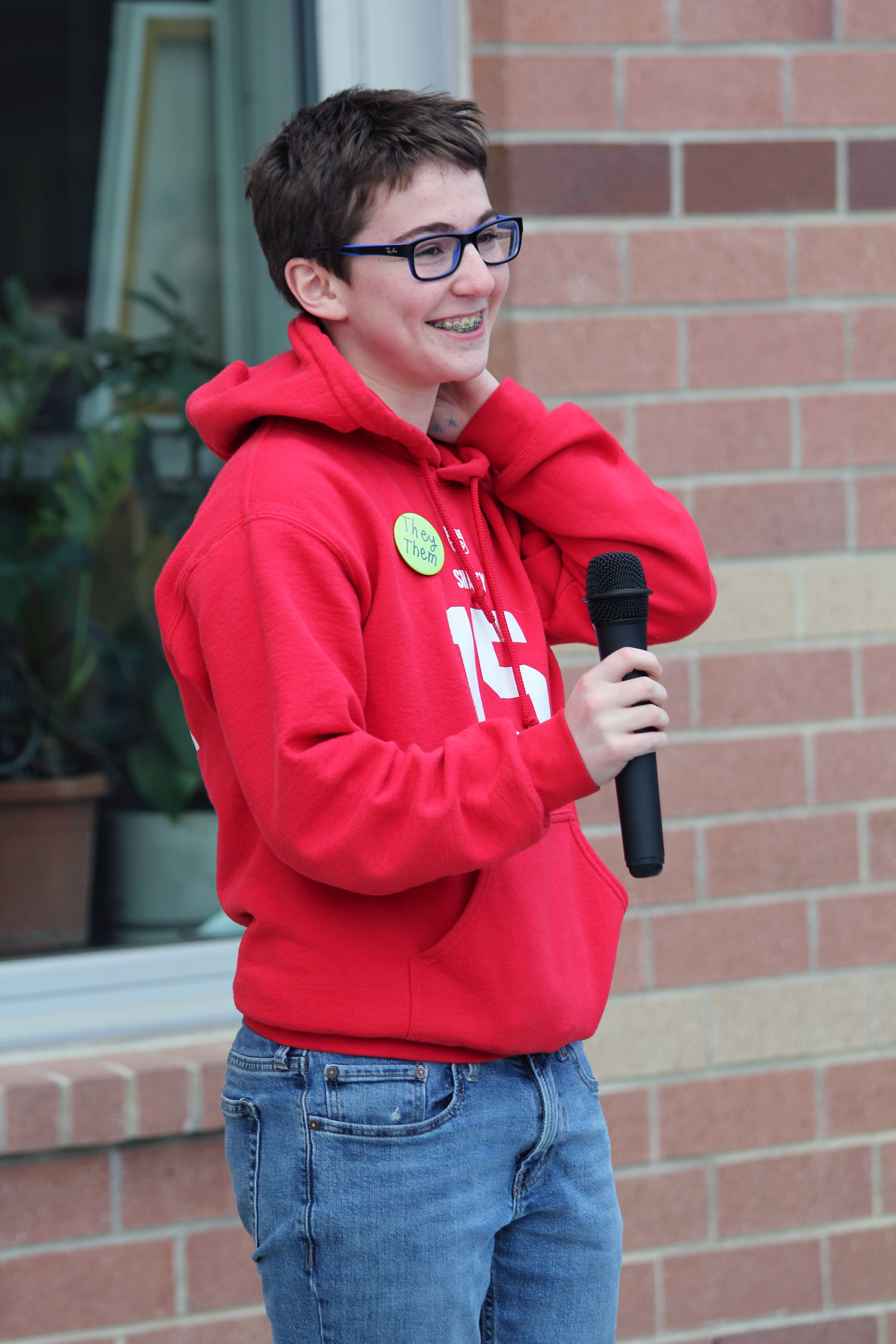 Yet at the same time however, many also agree with Brown’s opinion that the rally failed to completely represent all women and truly encapsulate intersectional feminism.

Jasper said,“The rally was predominantly white, straight, and cis, so we still have a lot of work to do in building an intersectional feminist movement.”

However, she added that despite the lack of diversity, she still appreciated being able to hear the voices of some women of color, plus size women, deaf women, and genderqueer people.

For anyone who can, Jasper encouraged getting involved with Boston Socialist Alternative, Showing Up For Racial Justice, and Boston Feminists For Liberation to continue the feminist movement.

Sophia is a senior at Newton North High School and co-editor-in-chief of the Newtonite. She is a member of the debate club and Model United Nations as well as the girls cross country and track teams. In her free time, she enjoys reading, writing, running, and playing the piano. Sophia also loves to travel and hopes to someday road trip across the country and backpack through Europe.