Harambee began the concert with three of its own songs, all done incredibly well. Notably, the group sang “The Prayers” by Donnie McClurkin, featuring South junior Angel Senfuma. Her rhythmic and powerful voice awed the audience as it filled the auditorium. The talent of the group shone through in their flawless harmonies.

For Harambee’s last song of the night, Jubilee joined the group to perform “Looking For You” by Kirk Franklin. Lively and upbeat, the song was accented by different sections repeating each other, creating an echo effect. The audience participated by singing and clapping in certain sections of the song, adding to the concert’s engaging nature.

An arrangement of “Instruments of Peace,” by Lionel Peterson, began with a quiet, breathtaking harmony that displayed the choir’s impeccable tone. Featuring amazing performances by senior Tommy Mobley and junior Ethan Smith, the emotional song discussed combating the bad in the world with love and faith.

Later in the night, the group performed its signature song “Jubilee,” written by Reid and Jason A. Hines. The uplifting song was about connecting as a group.

Senior Jelani Asim next read a moving speech entitled “Are We There Yet.” The speech revolved around the national anthem and questioned if America truly is “the land of the free” in a comedic yet thought provoking way. The speech dealt with the pervasive nature of racism in the country and how society must try to change it by acknowledging its existence. The full chorus then sang the national anthem, starting in unison but then moving to complex harmonies. 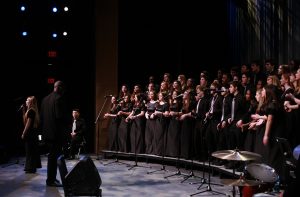 “Can’t Give Up Now” by Mary Mary, a highlight of the concert, was about overcoming obstacles to reach your goals. The song began with compelling solos by senior Ella Laniado and junior Elise Hausman. The soloists then joined together in a perfectly blended, beautiful harmony, which charmed the audience. The chorus joined in at the end of the song, tying it together superbly.

This song was followed by “Sing for Joy,” by Freda Battle. “Sing for Joy” was a funky song that showed off the talent of the chorus and had much of the audience out of their seats and dancing. The song had a second part that included a call and response with the audience and striking horn playing in the band.

Senior Jonathan Gomolka impressed the audience with difficult riffs and his terrific range in “I Love You,” by Walt Whitman and the Soul Children of Chicago, a slower song.

The night ended with an incredible solo by junior Swabira Mayanja in “Come by Here,” by Walter Hawkins. Her beautiful voice carried throughout the auditorium, bringing the audience to its feet in awe and appreciation. The climax of the night, this song provided the perfect ending to an incredible concert.