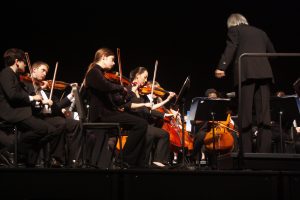 by Peter Diamond and Maddie Griswold

Music groups from this school’s fine and performing arts department celebrated the autumn with their first concert series of the year in the form of the annual Harvestfest Wednesday and Thursday at 7 p.m. in the auditorium.

Harvestfest I was characterized by its unique, eclectic feel, as its set list was filled with jazz songs, gospel pieces, and even some classical music re-imagined for a large band. The Symphonic Band, conducted by music teacher Richard Labedz, kicked off the first night of this two-day concert with Robert W. Smith’s “Kronos.”

Later, this ensemble, comprised mostly of underclassmen playing wind, brass, and percussion instruments, brought an untraditional sound to an old classic, Ludwig von Beethoven’s “Adagio Cantabile.” They performed Larry Daehm’s arrangement for a band rather than an orchestra, which gave the piece a bold and unusual, but nonetheless lovely, mood.

Next, the Honors Wind Ensemble, also conducted by Labedz, demonstrated impressive tightness and unity as a sizable group of instrumentalists. Their rendition of “Down a Country Lane,” originally composed by Aaron Copland to be played by piano students, had the gentleness of an orchestra despite having the distinctive flavor of a larger band.

Next, Labedz’s instrumental and vocal jazz groups brought a new mood to the evening. The Jazz Ensemble, an assemblage of lively, occasionally improvising instrumentalists, performed three energetic pieces, including Mike Lewis’s wild arrangement of “When the Saints Go Marching In” that especially showcased the brass musicians.

Keeping the audience in a jazzy mood, Tiger Bebop, a more intimate ensemble of jazz vocalists, began with a daring a cappella rendition of “Splanky,” a traditionally instrumental piece originally performed by the Count Basie Orchestra. Then, a few instrumentalists came onstage to accompany Tiger Bebop in Steve Zegree’s four-part arrangement of the jazz standard “All of Me” by Gerald Marks and Seymour Simons, featuring impressive trumpet solos by senior Alex Fabry.

The Jubilee Singers, this school’s gospel choir, directed by music teacher Sheldon Reid, was the last ensemble to perform during the first evening of Harvestfest. Their first song, “Didn’t My Lord Deliver Daniel,” a traditional spiritual, included a beautiful solo by senior Maddy Waters. A few student instrumentalists accompanied the Jubilee Singers’ next song, Psalm 32 of the Bible set to music by an arranger called skxr. Ending the evening with spirituals and gospel led the audience from the theatre with sky-high energy.

In an unexpected twist, a smaller group of female singers stepped down from the risers to join in an acapella rendition of the popular song “Royals” by Lorde.

The number was refreshing, providing a contrast to the typical classical theme of the evening. Young kept time in an innovative manner, providing a beat with alternating snaps and stomps that accented the piece.

The Family Singers then joined to aid the Concert Choir in their brief and final song of the evening, “I Know a Young Maiden Wondrous Fair” by Orlando DiLasso. Their combined vocal efforts provided for a powerful performance.

Next, Family Singers, conducted by music teacher Adam Grossman, dominated the stage with the eccentric piece, “El Grillo (The Cricket)” by Josquin des Prez. They also performed “There Was an Old Lady of France” by Mátyás Seiber. This unique number was predominantly sung in a round, with the occasional comical “quack-quack” to evoke laughs from the audience.

In the high point of the evening, Family Singers were accompanied by the String Ensemble in “He, Watching Over Israel” by Felix Mendelssohn. Their voices blended flawlessly with the smooth tones of the strings to create a velvety vibrato which commanded the attention of the auditorium.

The union of the two groups bore witness to the sheer talent in the musical program at this school. The piece also represented an apparent collaboration between groups in this year’s Harvestfest.

The Orchestra, conducted by Grossman, took the stage next. Performing the familiar piece “Fantasia on Greensleeves” by Ralph Vaughan Williams, the Orchestra contributed to the evening full of contrast. As hinted from its name, “Fantasia” was a dream-like and heavily dramatic tune, enhanced by interspersed violin solos.

The conclusion of the evening was “Symphony 101, Finale: Vivace” by F.J. Haydn. Although the piece begins slowly, concentrated mainly on violins, the eventual arrival of the cello provided a depth. The piece provided an effective finale for Harvestfest, culminating in a dramatic crescendo.