Harvestfest, an annual fall concert featuring many of this school’s musical groups, will take place Nov. 19 and 20 in the auditorium. The first musical concert of the year, Harvestfest will expose the audience to many different styles of music and to the incredibly talented musicians that worked hard to prepare the show.

Jubilee Singers, Tiger BeBop, Symphonic Band, Jazz Ensemble, and Wind Ensemble will perform at Harvestfest I Nov. 19 at 7 p.m. in the auditorium.

One of the songs Tiger BeBop, a vocal jazz group, will be performing is “Choo-Choo Cha Boogie” by Louis Jordan. Junior Sonia Joffe is excited to perform this piece because it is “a really fun, upbeat song.”

According to junior Ethan Smith, Jubilee Singers will be performing a high-energy piece that the audience should look forward to called “Be Like Him,” by Kirk Franklin.

He added that the piece has “an engaging bass part at the beginning and it is overall a lot of fun to sing for the entire choir.” 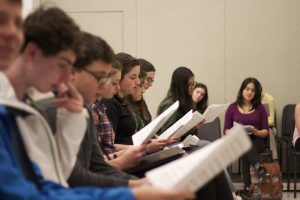 Concert Choir, Family Singers, String Ensemble, and Orchestra will perform at Harvestfest II Nov. 20 at 7 p.m. in the auditorium.

Music teacher Adam Grossman, who conducts all four groups, said that he specifically chose to feature a diverse collection of pieces from a large range of musical styles and from time periods as far back as the 16th century.

“I’m looking forward to featuring different kinds of music from different periods and styles,” he said.

First, Concert Choir will take the stage to perform “Barnyard Cogitations” by Quincy Porter; “Congori Shango,” a Costa Rican calypso arranged by Rolando Brenes, and “All the Things You Are” with music by Jerome Kern and arrangement by William Stickies.

Then, Family Singers, will sing “Strike It Up, Tabor” composed by Thomas Weelkes, “April is in my Mistress!” by Pace Thomas Morley, “dominic has a doll,” an E.E. Cummings poem arranged to music by Vincent Perischetti, “I Sowed the Seeds of Love” by Gustav Holst, and “Veni Sancte Spiritus” by Wolfgang Amadeus Mozart.

The Orchestra’s string players will play Mozart’s “Divertiment K136,” “Fugue for Strings” by Benjamin Husted, and “Overtures and Dances” from George Frideric Handel’s opera Berenice. The full Orchestra, comprising of wind instruments and String Ensemble in addition to the regular Orchestra, will perform George Gershwin’s arrangement of “I Got Rhythm” and two movements from Felix Mendelssohn’s “A Midsummer Night’s Dream,” based on the Shakespearean play of the same name.

According to senior Luke Fisher, a member of the Orchestra, the pieces sound alluring and allow the players and the audience to truly connect to the music.

Junior Alex Weylman said, “I’m looking forward to it because the music department is gonna be performing a lot of very diverse and interesting pieces on both nights.”