Harvestfest starts the year off strong with range of musical styles

Music thundered throughout the theatre and shook the seats of the auditorium in Harvestfest I, last Thursday at 7 p.m.

Music teacher Richard Labedz described Harvestfest as “The initial kickoff to our concert season.” For most of the music ensembles at this school, the two-night performance was their first debut of the school year.

First up was the Symphonic Band, directed by Labedz, which performed “Encanto” by Robert W. Smith. The large wind section and subtle percussion set the theme for the night as the pace slowly picked up, filling the room with music.

The Wind Ensemble, also conducted by Labedz, played “The Crosley March” by Henry Fillmore. The fast-paced music danced around the room and emphasized many different instruments, as if it were playing a game of hide and go seek with the audience. 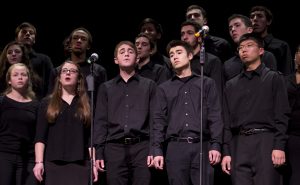 Switching themes, Tiger BeBop sent a jazz vibe throughout the auditorium. Lead by Labedz, they sang “At Last,” arranged by James Althouse. The slow tune and cozy feel reminded the audience of the approaching holiday season.

The Jubilee Singers, conducted by Jubilee director Sheldon Reid, took the stage with an outstanding performance of “I Wanna Be Ready,” arranged by James Miller. Led by junior Amanda Kuo, the deep and powerful song that was reminiscent of the african diaspora took the audience by surprise as it occupied every corner of the auditorium with its presence.

Drawing the show to a close was Jazz Ensemble’s “Not Yet Over the Hill,” arranged by Mark Taylor, which featured improvisational solos from multiple performers. The fast paced song brought the concert in a full circle with its reintroduction of jazz instruments.

All in all, Harvestfest I did a phenomenal job displaying the music talent at this school and set high standards for following concerts.

Concert Choir opened the concert with a light-hearted piece, Quincy Porter’s “Barnyard Cogitations.” Singing of chicken legs and ducks that don’t cluck, Concert Choir showed off its pleasant and cohesive collection of voices with the humorous song.

For a change of pace, one of Concert Choir’s most memorable numbers was the song “All of Me,” written by John Stephens—better known by stage name John Legend—and Toby Gad. This piece successfully combined the familiar tune with traditional-choir singing for a sweet rendition of the love song that captivated listeners last summer.

When Family Singers took the stage in black suits and long green dresses, they wasted no time in displaying their talents with the Thomas Weelkes’ song “Strike it Up, Tabor.” Fast-paced and with difficult runs, the lively piece invigorated the concert. Family Singers revealed their clear prowess by navigating challenging parts with ease, and then were joined by String Ensemble for “Veni Sancte Spiritus,” composed by Wolfgang Amadeus Mozart. The two groups blended perfectly, with neither overpowering the other, but all able to show their skill.

Orchestra, last but not least, began its performance with three movements from “Overture and Dances from Berenice,” composed by George Frideric Handel. The piece was slow and enchanting, showing great control at the softer parts. Each section of instruments—violin, viola, cello, and bass—worked together seamlessly to create an extraordinary number.

In the final performance of the night, wind instruments—flute, clarinet, bassoon, and horn—joined Orchestra for two movements of Felix Mendelssohn’s “Incidental Music to A Midsummer Night’s Dream,” based on the Shakespearean play. The wind players added a new dimension to the strings as all brought life to Shakespeare’s magical world, providing for a triumphant and fitting end to a fantastic night of musical performances.