Behind the Scenes of Theatre Ink: Hair, Makeup, and Costume Design

Fabric swatches, mannequins with half-finished dresses, and racks upon racks of old costumes fill the wardrobe department room in North’s theater wing. Cork boards with pictures and magazine cutouts displaying hair and makeup inspiration for upcoming shows cover the wall. Glimpses into the designers of hair, makeup, and costume behind the curtains of every Theatre Ink production.

The crew begins the design process with a full script reading, in which they analyze the characters and setting of a show. Students subsequently develop inspiration boards featuring images of hair, makeup, and costume looks from the period and setting, as well as color schemes for specific characters. Throughout the design process, students reference the board in order to “keep within the world of our looks and characters,” according to Talvacchia.

In order to become involved in this design process, students can take the Introduction to Costume Design elective, taught by Talvacchia. The course teaches the basics of sewing, hair and makeup, and crafting costumes, with a focus on those of Theatre Ink productions.

Although the course is helpful to familiarize students with the techniques used in the design process, many students also begin working on the crew by visiting the wardrobe department and helping out after school.

“It’s definitely a choose-your-commitment kind of activity,” said junior Maya Lozinsky, who has worked on hair and makeup design for Theatre Ink since her freshman year. “You don’t have to take the Intro to Costume Design elective” to become involved, she said.

Some students even lack backgrounds in theater. Junior Celia Friedman’s entrance to the world of Theatre Ink simply stemmed from her experience with doing hair and makeup on herself. After attending a number of training sessions with the design department, she said, “I really liked it, so I stuck with it.” Now, she has been working on hair and makeup design for over a year.

Once students have committed to working on a show, “it’s a pretty involved process,” Talvacchia noted. Members of this team may find themselves staying late after school to continue their work, and the time constraints often prove challenging for designers. “You have to put in a lot of work if you want to be really involved,” said junior Harper Stein, a member of Theatre Ink’s costume design crew since her freshman year. “You’re working on a tight timeline for shows.”

The detail necessary for costume design amplifies these time pressures, and “you stress yourself out by trying to do everything perfectly,” Stein added. Hair and makeup teams also often struggle with quick changes between scenes, in which they may have only a few minutes to swap wigs or create entirely new makeup looks.

This work ultimately pays off when designers view their work onstage, according to Stein, as the hair, makeup, and costumes of characters in Theatre Ink productions subtly intertwine with the production’s script, plot, and characters’ 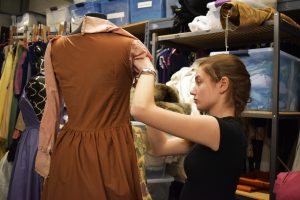 In Rodgers and Hammerstein’s Cinderella, the upcoming spring musical March 15 through 18, for instance, Prince Christopher’s initial costumes feature a bronze color palette. As the play progresses, however, these tones shift to greener hues, reflecting the influence of Cinderella’s nature-oriented lifestyle. Even the delicate hand-painted leaves on his vest convey a sense of growth in Christopher.

Although late and stressful nights are common, the experience is worthwhile nonetheless, according to crew members. “It’s really fun and creative,” said Stein, albeit “a big time commitment,” and students “should stop by if they’re interested.” In collaboratively devoting time to hair, makeup, and costume design, crew members similarly create lasting bonds with their peers. “I really like being able to work with the community,” Lozinsky explained. “You make a ton of new friends.”

Ultimately, designers’ ability to tell a story through costume choices and seeing their own work onstage proves gratifying for all those involved. “It’s about bringing a person to life onstage,” said Friedman.

Opinion: Larry Nassar is not the only one to blame