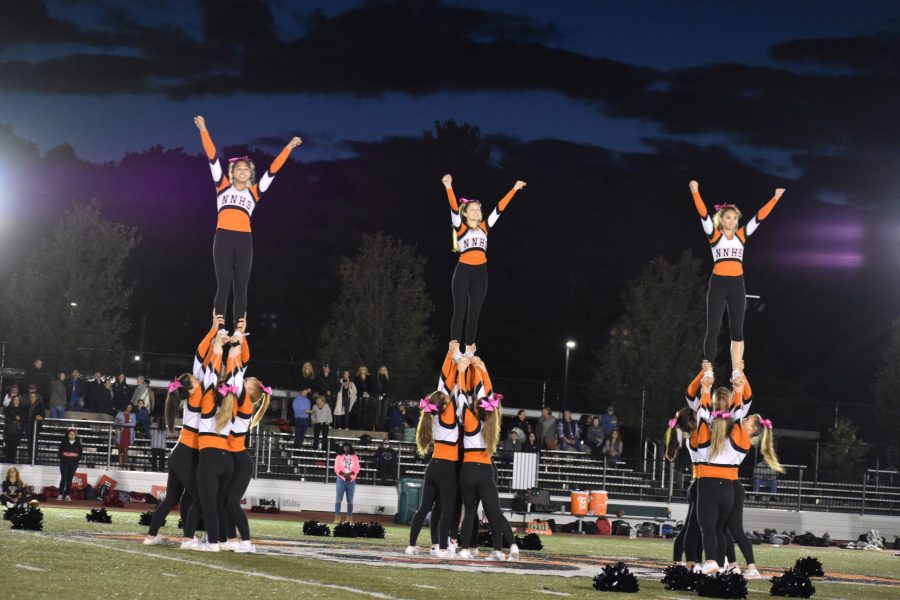 Former Needham cheer coach Teresa Colella hopes to combine her past work and experience with teens, in her first year as head coach of North’s cheerleading team.

According to senior Nicole Semenoff, a captain, “She’s very hardworking. She doesn’t talk about it very often, but she mentions she gets up at 6 a.m. She comes to coach us at 5 p.m., and she already has a full day before that. It’s really admirable.”

Colella completed college at the University of New Hampshire in 2010, majoring in Child Advocacy and Family Policy. She currently works full-time with families and their children as a developmental specialist in early intervention. She also runs a parent coaching business, working with teenagers. “My entire time is spent with children,” said Colella. “I absolutely love working with children, families and teens.”

In high school, she was the captain of Needham High School’s cheer team, and went on to coach varsity cheer at the school for 11 years. In addition, she helped develop their youth cheerleading program. “She is really ingrained into the cheer culture in Massachusetts,” said Athletic Director Mike Jackson.

Colella was hired, following the departure of former coaches Emily Bitchell and Briana Hogan. Her selection was based on a recommendation given to Principal Henry Turner from a committee that included Jackson as well as parents, students, and other faculty.

According to Jackson, he vetted potential candidates by assessing their general experience and conducting individual interviews. The strongest candidates were then interviewed by Turner before the decision was made.

Colella added that she looks forward to “getting to know the Newton community. I know it’s very similar to Needham, but it’s also very different.”

Even as this school year shapes out to be more normal than the last, Colella said that she is fully prepared to combat any COVID-19 limitations. “I think the COVID 19 pandemic will continue, and we will continue to take necessary precautions,” said Colella.

Despite it being just her first season, Colella has high hopes for her first season with North. “My hope is that we will be able to compete at the fall Baystate League Championships with other towns present,” she said.