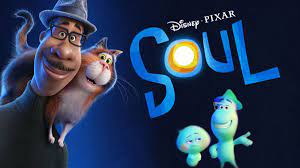 Soul (2020) combines the fun, cartoonish style that previous Pixar movies encapsulate, coupled with a deeper message of accepting yourself, to create one of the best animated movies of the year.

Directed by Pete Docter, Soul released Dec. 25 on Disney+, the movie follows Joe Gardner, voiced by Jamie Foxx, as he attempts to find his true self and purpose in life.

Set in New York City, Gardner is a middle school jazz band teacher dissatisfied with his job. One day, one of his previous students, Curly, voiced by Questlove, calls him. Curly gives him an opportunity to play jazz with Dorothea Williams, a famous jazz musician, voiced by Angela Bassett. After being chosen to play in the band, Gardner falls into an open manhole on the way home and is knocked into a coma. He finds himself in a place described as “The Great Before”, an area where all souls are “created” before being sent to earth. There, he is enlisted to mentor Soul number 22,  a particularly rebellious soul, voiced by Tina Fey. Together, they must find 22’s passion, in order to get her a life on earth.

One of the best aspects of Soul is its animation. While the lighting and the backgrounds are realistic, the character design retains the classic cartoonish look. This stylistic choice allows for beautiful animation without the movie losing its charismatic children’s movie feel. Additionally, the animation style does shift when Joe enters the Great Before, to a more fluffy and childish type.

While most of the story was incredibly good, the ending was another cookie-cutter Pixar finish—a bit unoriginal. It made its point, telling the audience that they should be their true self, but it seemed rushed.

When Soul began development in 2016, there was much discussion on how the main character should be shown. In a recent interview, Co-Director Kemp Powers said that their goal of the movie was “to take people on this artist journey of finding a character that we could root for. We played around with an actor or a scientist. But as soon as we found a jazz musician, that felt very selfless.” Indeed, Gardner is a main character people can root for because he is a person who is determined to grow and learn. Despite its few flaws, Soul is a powerful movie. The movie arrived at a perfect time, with the COVID-19 pandemic leaving families isolated and locked in for the winter holidays. Soul’s message of finding oneself speaks to many people. The combination of spectacular animation and an overall fantastic plot sealed its spot as one of the best movies of 2020.