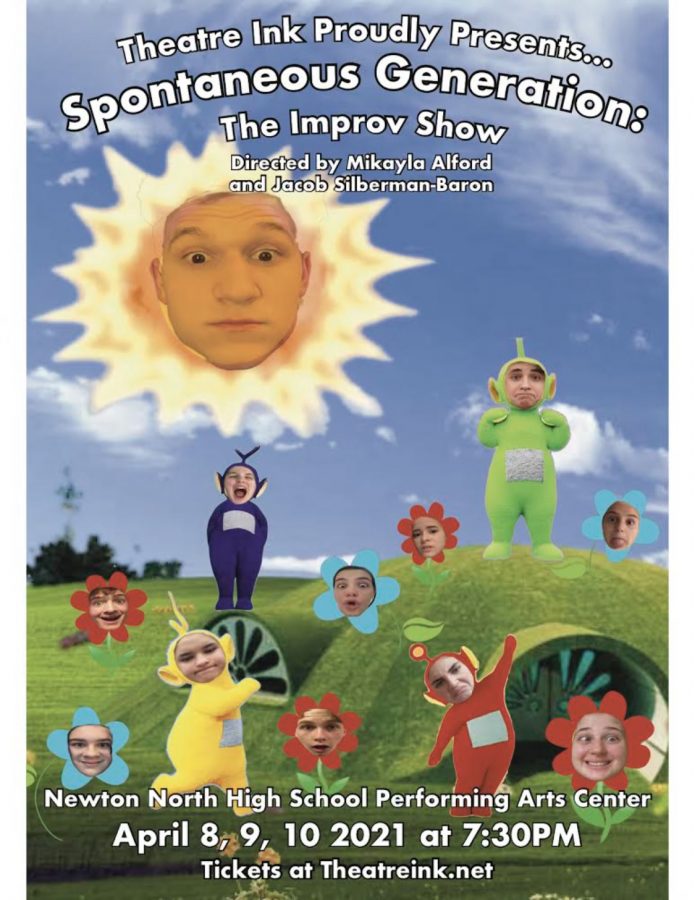 Improvisational comedy show, Spontaneous Generation, thrilled audiences through a rollercoaster of wacky games and unscripted jokes. Directed by seniors Mikayla Alford and Jacob Silberman-Baron, the troupe performed April 8, 9, and 10, offering both online and in-person viewing in the auditorium.

Silberman-Baron praised the cast’s tight-knit energy that brought the entire show together. “Closing night, the energy all came together,” said Silberman-Baron. “It’s hard to do something like this in an auditorium, but I’m so proud of how we got there and this group as a whole.”

As opposed to previous years, the performance this year featured no singing but incorporated a handful of eventful games that kept audiences wanting more.

According to Silberman-Baron, cast members were able to use the interview conversations to better the performance as a whole. “Every scene builds off each other,” said Silberman-Baron. “It was so fun to play around and interact with all the interesting answers that audience members had.”

Another game, “Radio Dial,” assigned cast members to act as various radio station hosts. For example, a radio station featuring a cowboy taught listeners how to prosper in specific settings, such as the wild west. Cast members presented their assigned radio station topics in satirical and comedic manners.

“It was pretty funny and creative,” said junior Sam Melville, a cast member. “We really had to think about how we could approach each radio topic with humor.”

“Death by Improv” also caught the attention of viewers and cast members alike. The cast was put in pairs to perform improvisation on a diverse array of occupational and geographical topics, ranging from simply playing a sport to inexplicably acting as a bowling pin. Performers mentioned these topics through many unexpected ways.

According to freshman Charlotte Davis, a cast member, the game was very loosely directed. “I really like how fast and on-the-spot the game was,” said Davis. “All you had to do was somehow tie in the topic you were assigned to the improv –– there was unlimited creativity on how to do that.”

In addition, cast members were able to redeem a lost opportunity from last spring. For Melville, this year’s performance was revitalizing. “It was tough when it was cancelled last year because I was really looking forward to it,” said Melville. “It was really cool being able to perform for the first time.”

Melville added that he had always wanted to perform for Spontaneous Generation. He said that growing up watching the show fueled his passion to one day participate in it.

This year, Spontaneous Generation did not set out to accomplish a concrete goal. Instead, the directors and cast members alike aimed to entertain the community amidst the pandemic.

“We only wanted audiences to have a good time and show that accomplishing something during difficult times is possible,” said Silberman-Baron.

Melville also emphasized that the show was all about making the best out of uncertain circumstances. “You have to take pride in what you do,” added Melville. “Embrace the unknown and keep a positive mindset through it all.”