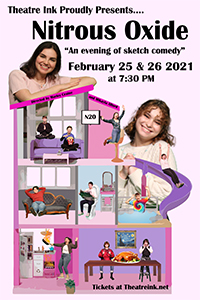 With the goal of fostering humor amidst unusual circumstances, Theatre Ink’s annual showing of Nitrous Oxide will stream online, featuring numerous prerecorded sketches and comedic skits. Directed by seniors Mikayla Alford and Marley Craine, the show will run Feb. 25 and 26 at 7:30 p.m. and is composed of about 20 video skits written by a cast of 12 North students.

According to junior Sam Melville, a cast member, the new virtual format allowed actors to tweak their style of comedy in new ways. “This year, it’s pretty cool going to a new medium,” said Melville. “Even in terms of writing the sketches, it’s much different writing a sketch for a stage, as opposed to a sketch for a video.”

Alford spoke on the importance of the cast building community and trust as a whole. “Nitrous is a learning process. We all learn how to write together and then go through learning how to act,” Alford said. “You’re putting a lot of yourself out there since you’re expressing yourself through your writing and your acting, and so I think it’s a lot about working together at it as a team.”

According to Craine, the process of creating Nitrous Oxide started early in the school year, when the cast began learning different comedic and scripting techniques in tight-knit groups. In addition, cast members spent the early stages writing sketches individually.

Craine added the process has been slightly different this year, with greater emphasis on the acting and recording, and lesser time spent on writing and editing the scripts.

According to Craine, the performance wishes to provide laughter and happiness during such unprecedented circumstances. “I think we all really just need a laugh right now,” Craine said. “Even though it’s not the same as it’s been every year, I hope it’s the same amount of funny, or even more funny.”