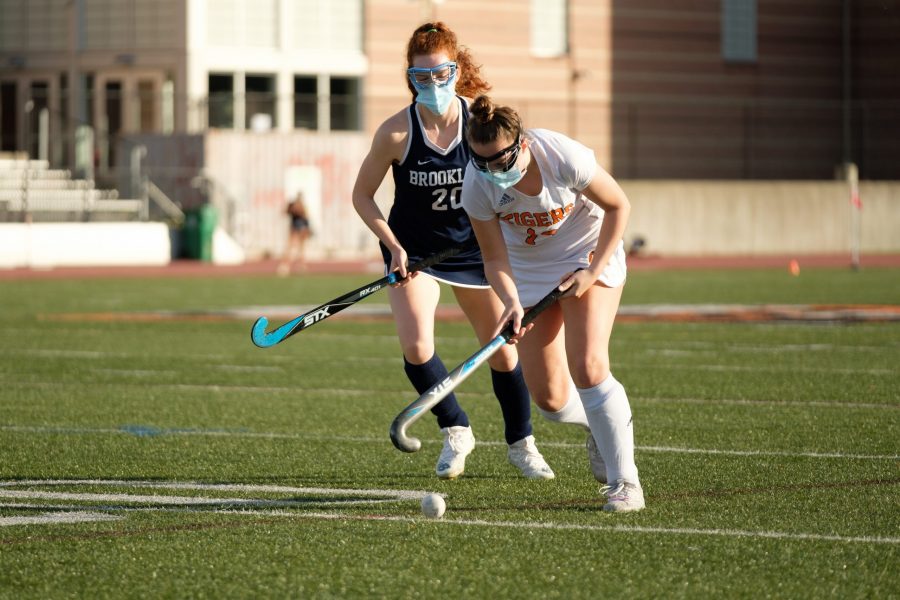 The soccer team completes passing drills, field hockey begins scrimmages, and the cross country team runs around the track. The fall sports season at North has drawn to a close. Athletes had not played North sports since March, and it is refreshing to see athletes training at North again. However, there is one notable difference on the fields: all the athletes are wearing masks.

Aside from masks, there were numerous other COVID-19 guidelines for fall sports teams. Yet, while the pandemic has presented changes to sports teams’ normal seasons, teams tried to adapt to try to make the best of these suboptimal circumstances.

COVID-19 has presented varying difficulties for each sports team. However, for some, such as Boys’ soccer, the season ran smoothly. According to junior Will Rooney, a captain, “overall, the game isn’t that much different and the season has been fun so far.”

For other teams, a theme has been a decrease in competitiveness. According to senior Alex Filipova, a captain of Girls’ swim and dive, “we definitely lack the competition aspect of meets this season since the other team isn’t physically racing against us, and now we are forced to only race against each other. It is especially hard on our top swimmers who now aren’t able to race against people from other teams who might be as fast or faster than them.” Filipova added that cheering during swim meets is not allowed as well.

Senior Jessie Coomber, a captain of Girls’ cross country, also felt a lack of competition due to these new guidelines. According to Coomber, “the meets have definitely been a big difference, especially since only a few girls have participated in them.”

This lack of competitive energy, however, has presented other opportunities for the swim team, according to Filipova. Because “there isn’t as big an emphasis on competition this year, we are more focused on team bonding and improving the culture of the team rather than cut times or varsity qualifications,” she said.

For nearly all sports teams, building a strong, tight-knit community among team members is important. Normally, teams organized team bonding activities such as captains practices, team dinners or other events throughout  the season. COVID-19 has made planning these activities particularly challenging.

Senior Isabelle Magrè, a captain of Girls’ field hockey, said she has to miss out on some of the senior activities that she would have done had it not been for COVID-19.

According to senior Jess Minkin, a captain of Girls soccer, “we don’t know how much we’ll be able to hang out with each other outside of practice.” She added, “last year, we got to do lots of fun activities, like canoeing. We also went bowling last year, but this year, we can not do that stuff, obviously. We are trying to organize some safe, socially distanced activities but there are very few things we can do.”

This statement rings true even for team traditions such as team dinners. According to Minkin, the food is individually packaged and team members had to maintain social distancing guidelines.

Magrè added “it has been a lot harder for the team to connect because of how short our season is and how we only can see each other at practices.”

Another challenge with regard to team bonding is the division of the team into pods for practicing. According to Coomber, “we have four pods, and around 11 girls in each one. Everyone does the training with their pod. So each day, a different pod has a different workout.” She added, “the pods also separate the team a lot, which is definitely different than when we would all go on runs together.”

Despite all these restrictions, athletes adapted and attempted to make the best of the less than ideal situation at hand. According to Minkin, because outside of practice bonding opportunities were rare, there was an increased emphasis on team culture during practices.

Athletes were also determined to maintain the social aspect of sports with positive spirits. According to Coomber, “even though it’s been hard and different, it’s still been great, like after a long day to just be with people in person and workout together even if there are all these changes.”

Minkin also maintained a positive outlook, adding that athletes should try and make the best of the situation and try to make the seasons as normal and enjoyable as possible.

With fall sports drawing to a close, there is an air of uncertainty surrounding winter sports. Junior Florian Kuechen, a member of Boys’ basketball, remains optimistic about the season. Kuechen said, “if the season got canceled, I’m sure there would still be pick up leagues where we can play with our teammates and continue to get better for the next season.”

Overall, sports teams managed to successfully carry out their seasons despite the unfortunate circumstances they faced. This was especially important for some seniors, who might have been playing a sport competitively for the last time. However, by carrying positive attitudes and thinking of creative ways to adapt, they can still ensure a memorable last season.