Artist Spotlight: Betsy Donnellan creates art for a cause 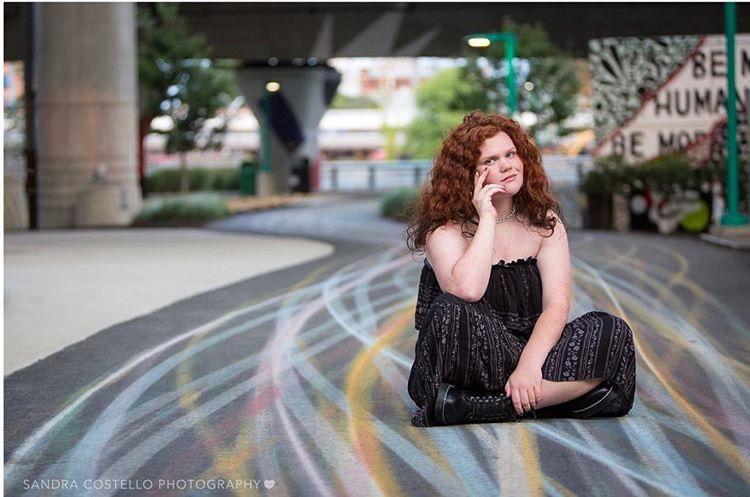 When most people think of art, the process typically doesn’t involve dodging cars or kneeling on asphalt for eight hours in 80-degree weather, but for senior Betsy Donnellan, that is what creating her art entailed.

In June, Donnellan decided to use her art as a way to use her voice to speak out against injustice. To honor George Floyd and other victims of police brutality, as well as to help to start a public conversation about a lack of police accountability, she created a public chalk mural of Floyd.

In collaboration with Signal Graphics, Donnellan also sold shirts with the Floyd mural in order to raise money for the National Association for the Advancement of Colored People (NAACP).

“I really wanted to do something,” she said. “When you have the ability to draw, you feel like you have something to offer. Since I couldn’t make it to the protest that day, I still felt like I had to use my voice.”

For as long as she can remember, senior Betsy Donnellan has used art as a way to share her interests and give herself a voice.

“I started getting serious about drawing in around sixth or seventh grade, and started my art account in eighth grade,” said Donnellan. She has been using her Instagram account @17anddrawing to showcase her work since early 2016.

According to Donnellan, starting young gave her the ability to improve her skills and develop her style without comparing herself to other artists. “It wasn’t scary to start drawing back then,” said Donnellan. “As I got better and the bar was raised, it got a lot more stressful, but at the end of the day it’s about creating what you want to create.”

Senior Mannie McBride, a friend of Donnellan, said that her art is one of the reasons they became friends in the first place. “We were in the same math class and she sat next to me,” said McBride. “I learned about her art because she was always doodling on her papers in math.”

Donnellan enjoys drawing portraits, many of which are musicians. “It’s funny, I don’t really have any drawing inspirations for my work,” she said. “But my art inspiration is mainly musicians, especially David Bowie.”

She can still remember the first time she was truly proud of her work: a pencil drawing of Audrey Hepburn she did in seventh grade. Looking back, Donnellan said that piece is why she began seriously drawing almost every day.

While some people consider art to be a natural talent, Donnellan said that it’s more about the time and effort put into it. “Talent is a pursued interest,” she said. She hopes that when people see her improve through her hard work, they realize that they could do it too.

She spends most of her free time on her art, as each piece takes anywhere from three to five hours to complete. “I’ve seen her improve immensely with proportions and color theory,” said McBride. “She is constantly making art and getting better with each piece she makes.”

While Donnellan is nervous about the future, she hopes to pursue animation or illustration in college. “This is what I have, it’s what I do. I really hope to go into that sort of field.”

The night after Donnellan created the chalk mural, an unexpected storm washed away the chalk drawing, but seeing people at protests wearing her shirt helped prove to Donnellan that while the drawing was temporary, the impact it had wouldn’t be.