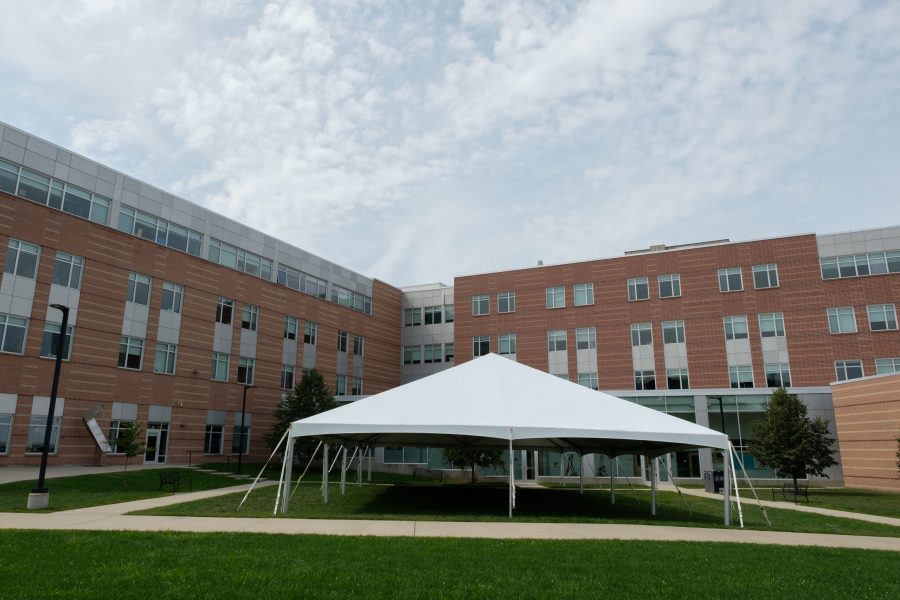 A tent sits in the Art courtyard outside North. (photo by Ian Dickerman)

Instead of the typical dimly-lit auditorium and rows of cushioned seats filled with spectators, shows held on Zoom or socially distanced performances outside will be the new normal for Theatre Ink this year.

“We have our season pretty much planned,” said Theatre Ink director Adam Brown. “We are going in knowing that we have to be flexible and fluid.”

Brown, along with students involved in theatre, spent the summer planning shows that could be performed digitally or in-person depending on the circumstances.

For example, this year, Freshman Cabaret, an annual performance by freshmen, will be held remotely. “We want to record or at least rehearse the show outside if we can,” said sophomore Molly Baile, a director of the show along with sophomores Anderson Free, Mikayle Huntington, and Harold Purcell.

Cabarets and shows composed of smaller performances allow for far fewer students to perform at once, which is safer and more convenient.

The show “She Kills Monsters,” directed by senior Edie Pike, will follow this format. The program will consist of various pieces performed entirely by students of color. Pike took inspiration from the play “Adventures of a Black Girl in Her Search for God,” which Theatre Ink produced with a full cast of students of color in 2019.

“I’m really excited that I have this opportunity,” said Pike. “I’m not sure that it would have happened in a  normal year, so I am thankful for it even though it will be more difficult.”

When talking about his main goals for the year, Brown said, “we just want to get back and be together and I think everybody is feeling that way, not just in theatre. We are hoping theatre will make a difference for the kids, but also for the community.”