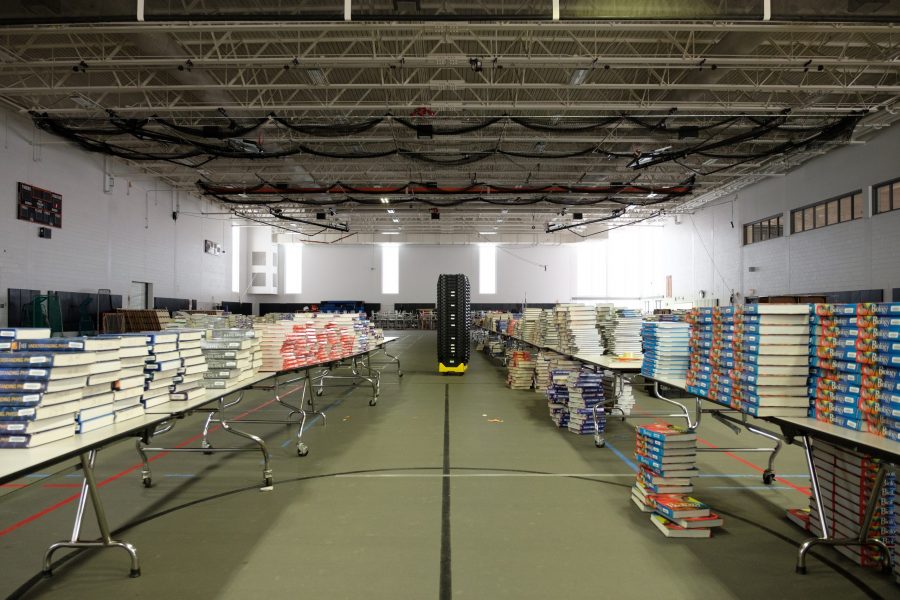 Textbooks and reading books line the SOA in preparation for the handout of these materials to students, which is still undetermined. (photo by Ian Dickerman)

Students are heading into what should be a fresh, new school year, yet looming overhead are concerns caused by the pandemic, which has created uncertainty and worry. The district’s mishandling of the reopening of schools has only inflamed this anxiety.

The School Committee approved a hybrid learning plan August 18, much to the anger and frustration of a number of students, parents, and teachers. In the short, but somehow long week that followed, the district recognized the inevitable and reversed its decision. The district then provided a revised recommendation to the School Committee to have high schools start remotely.

With only three weeks until the first day of school, the district’s planning left Newton students and teachers ill-prepared to plan for the upcoming remote school year. The virtual block schedule is still being negotiated and finalized between the Newton Teachers’ Association (NTA) and the district. Students received class links only the day before the first day of school. And, for elective classes like music and art, students began the year with no idea how their typical hands-on learning would be replicated online.

With little time and limited communication, families dealt with the headache of having to plan for the school year with minimal information. The district could have saved everyone the trouble if it had clearly evaluated the facts from the beginning.

It was obvious that the numbers for a hybrid model in the Newton highschools did not match up. Even with North at 50 percent capacity—roughly 1000 students—classrooms can only hold 12 students at six feet apart. Yet, North has over 100 courses with over 24 students per section. Students would have to be cohorted into groups of 12 or less, all taking the same courses, which would severely limit the variety of classes available to each student. The district did not need all summer to realize North was not big enough to accommodate a hybrid plan.

The district also did not need all summer to find out teachers’ and students’ ability to go hybrid. Superintendent David Fleishman said the surveys collecting data about the hybrid model were sent out late in the summer to accommodate for fluctuating COVID-19 numbers. However, teacher and family responses would have generally remained the same regardless of the number of cases because their responses are largely based on personal circumstances.

For example, if a teacher is the primary caretaker of her elderly mother, she may opt out of in-person learning to protect her family. Her response to the survey would not change based on the state of the pandemic, and therefore the surveys could have been conducted much earlier in the summer to give the district an accurate and better understanding of where teachers and families stood on the matter earlier on.

The district’s lack of urgency to communicate with NPS families is evident when comparing timetables to nearby districts. Needham approved its plan and communicated it to families August 11, and Watertown and Wellesley approved and communicated its plans August 6.  Although Newton may have more students than those three towns, Boston Public Schools understood the complexity of bringing tens of thousands of students back and created a four-phase plan August 21, starting virtually and slowly bringing students back.

If the district had recommended a virtual plan in July or early August, teachers would have had over a month to prepare before their first day back, therefore lowering the anxiety level of many students by ensuring their teachers would be well-prepared. For a district that values student mental health as one of its top priorities, it placed little thought into the effect of its ever-shifting and poorly communicated plans.

There will be a point when we return to the classroom, whether because a vaccine is made readily available, the school is able to conduct fast and easy COVID-19 tests, or further safety measures are determined. We all want to return to the classroom. Eventually there will be a hybrid plan. But the district should not rush the reopening only to repeat the confusion created over the last few weeks.