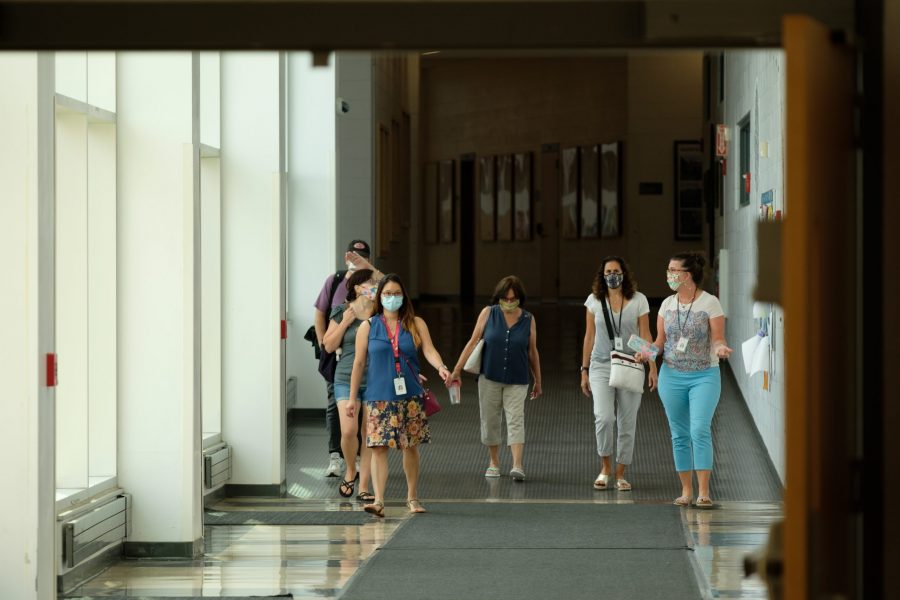 Faculty members walk down the hallway towards the theatre entrance Wednesday, Sept. 9. (photo by Ian Dickerman)

The Newton Teachers’ Association (NTA) has expressed concerns and frustrations with the district’s efforts to reopen schools over what it says is a disregard for teacher health and lack of collaboration with the union.

According to superintendent David Fleishman, teachers were a part of “planning teams” which consulted the district on the distance-only section of the reopening plan. NTA President Zilles argues that the union was barely involved in the reopening plan discussions.

Fleishman said the high schools will start remotely not because of health and safety concerns, but because there were not enough staff able to return to in-person school to accommodate the 85 percent of students who selected the hybrid model in a survey over the summer. Fleishman added that without enough teachers, the district would have to cut classes to implement the hybrid model. Elementary school is starting in-person, and middle schools are scheduled to transition to the hybrid model in November.

Space conditions and equitable access to course offerings in the high schools also influenced the decision to go fully remote, according to vice principal Amy Winston. “Our offerings in CTE, FPA and WL, and even our senior year offerings in ELA, Science and History are what makes NNHS so special, we were unwilling to eliminate those courses,” she wrote in an email.

“I think we’re in a situation where a lot of people are legitimately frightened about kids returning to school in-person. On the other hand, there are many, many parents who want their kids to return to school and many students who want to be in the buildings. I think we’re starting at a place that feels comfortable for a lot of people, and it’s very frustrating to some people.”

The NTA said the district is putting teachers in danger by trying to force a hybrid model with in-person learning.

Teachers are “in far riskier circumstances than they should be and need to be,” said Zilles. “In negotiations right now, they simply don’t hear our concerns about health and safety. They dismiss us, or they say, ‘we share your point of view, but there’s nothing we can do about it,’ which is just not true because we proposed something they can do about it.”

North guidance counselor Shani Leichter said the district’s surveys regarding the hybrid learning plan had flaws that bound teachers to in-person learning. She added, “I think that there has definitely been an incomplete consideration of teacher, staff, and staff family health.”

Leichter said that a staff survey over the summer only gave teachers the option to opt out of in-person learning if “they had a disability or illness on the CDC’s list and were able to provide documentation to support that they were high-risk or had family members living with them who met that criteria.” The problem with that, according to Leichter, is it “doesn’t take into account that a lot of us faculty take care of older parents that don’t live with us but who we’re primary caregivers for.”

Fleishman added that the district waited to finalize the plan so they could be sure of the health situation in Newton close to school’s reopening.

“We did do surveys that were fairly late, but they were not out-of-line with other districts. Because things have changed so much since June, we felt like to make a final plan in June with the health data would have been premature,” he said. “We were just holding out hope that we could make it work, but once we had the numbers, it became an impossibility.”

According to Zilles, the delayed planning from the district caused issues with elementary school teachers, some of whom are now forced to teach two grade levels at once.

Another concern of the NTA is the ventilation systems in elementary schools. According to Zilles, the district’s evidence that the ventilation is safe enough to reduce the risk of exposure for teachers and students is “woefully inadequate.”

“It’s clear that either they haven’t done some things, or they’ve done them inadequately, or they don’t have any data, or they’re not sharing data,” Zilles added.

According to Fleishman, the district will begin to plan the transition to in-person learning in high schools this fall. However, Zilles said he believes that is unrealistic.

“He’s promising something he can’t deliver,” Zilles said. “He’s trying to placate the parent community who want in-person learning, but the way it’s set up right now, it won’t work.”