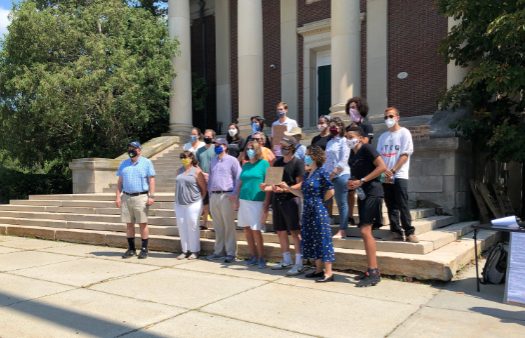 Protesters, led by North and South students, took to the streets Sunday, Aug. 23 to advocate for affordable housing in Newton and to encourage the defunding of the Newton Police Department (NPD).

The protest was organized by both Defund NPD and Affordable Housing in Newton. Protestors marched from the Waban train station to Newton City Hall, where the group held a rally.

“We believe there’s a strong link between racial equity and affordable housing,” said South senior Valerie Goldstein in her speech. “We want to work towards closing the racial wealth gap, academic and professional achievement gaps, healthcare, and much—much more.”

The various speakers, both students and outside guests, addressed perpetuated inequality in Newton through issues with housing, often while providing examples from various statistics. Repeated several times, many speakers pointed out that the media net worth of a Black family in Boston as of 2017 was $8.

The speakers urged the crowd to take action in many ways, from poetry to pure factual evidence to personal stories. “We fail to recognize all Black lives matter through our inaction and silence, by enabling a toxic racist environment to continuing evolving and driving out Black students, just from my very high school… We fail to recognize all Black lives matter as we continue on with our lives, knowing that the media net worth of a Black family in Boston as of 2017 is eight dollars.” said senior Christian Gaines.

Several political candidates in upcoming elections also attended the march. According Gaines, he and Alex Shames, the head of Defund NPD, reached out to the campaigns of eight Newton candidates, and encouraged seven to attend.

Gaines said that he was surprised to see how many influential figures came to the protest.

“It sort of became something much bigger than I ever expected it to be, and it just blew my expectations out of the water how we were able to bring so many influential people to hear about the issue, how we were able to make a lot of noise and have people hear our call for affordable housing,”

The protest’s route was lined by policemen who helped direct traffic. According to Goldstein, “A police officer with a gun doesn’t need to be letting a group of protesters cross the street, that’s what ‘Defund [NPD]’ is all about.,”

According to Gaines and Goldstein, the group took to the Newton public library, which is hosting early voting for upcoming elections, before and after the event with signs to try and educate voters and passersby about issues of affordable housing.

Gaines said that anyone looking to join the causes of Defund NPD and the fight for affordable housing should “be open to not completely understanding it at the start. Be okay with not completely knowing everything, or maybe not knowing anything coming into it, just learning bit by bit.”