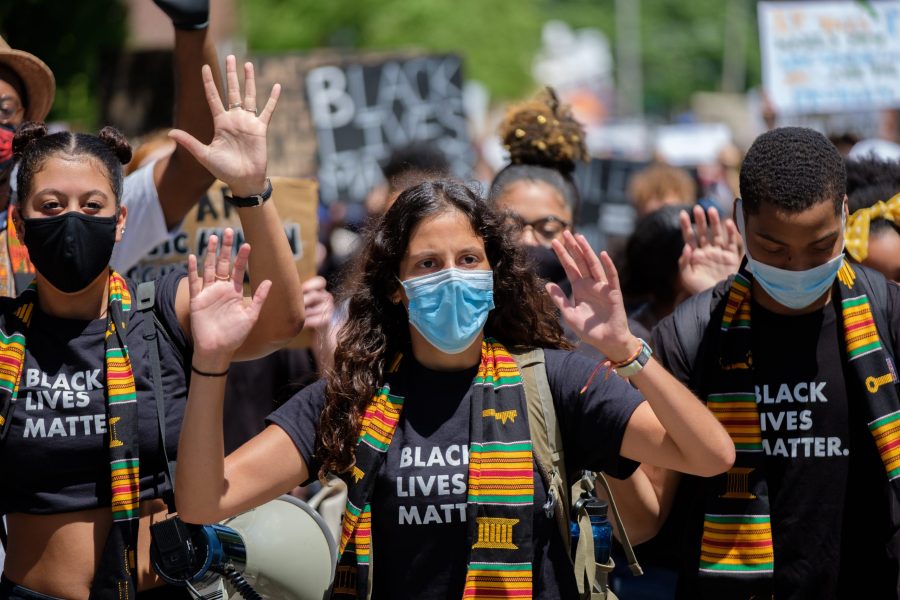 Dani Divo '20, with her hands in the air, leads the march with her fellow Class of 2020 organizers, shouting "Hands up. Don't Shoot" as the group heads down Commonwealth Avenue towards North Friday, June 19. (photo by Ian Dickerman)

Hundreds of North students and other Newton residents protested against racism and police brutality as part of the Black Lives Matter (BLM) movement Friday, June 19, more commonly known as Juneteenth, marking 155 years since the last U.S. slaves were emancipated in Texas.

Raghav Kadambi ‘20, an organizer, said that “the best way to celebrate June 19 is through love, and I feel that we did that through the march, because by making a difference you’re showing your love to the movement.”

According to Leyla Davis ‘20, another organizer, “ the hope is that the Infinity March is to be a guide” for the future of the BLM movement.

She added, “It’s important that people continue to march and continue to stand up for what they believe in.”

Incidents of police brutality against people of color, particularly the recent ones resulting in the deaths of George Floyd and Breonna Taylor, have sparked protests all over the country.

Though several protests have occurred in Newton and the Boston area, Kadambi said that he and the rest of the organizers, “wanted all of this to come from the youth. We wanted it to be youth-led and planned.”

Daniela Divo ‘20, another organizer alongside Treyvaughn Dames-Hill ‘20, Davis, Serena Jampel ‘20, and Kadambi, said that she found the most difficulty in conveying a unique message in an acceptably short period of time.

Each organizer spoke, starting their speech with the phrase “I have a dream,” and messages ranged from calls to action to demanding that the white portion of the audience stop to think about the advantages they have in life.

“Please parents, have those difficult conversations [with your kids], because that is how we make change,” Davis said after telling a story about her experiences with racism at a young age.

In her speech Divo explained how quickly the rally was set up, saying it was just “one text, two FaceTimes, and here we are,”, and proceeded to urge the crowd to think about what they can do with the same means.

Davis added that she and the other organizers are trying to ensure that they are not the only ones addressing this issue. “We are currently trying to work with a few younger students to help them with their mission and things they wanted to say,” she said.

According to Kadambi the rally was dubbed the Infinity March because “It’s never done, so we’ve got to keep going and keep fighting. It’s a very very long process.s… It will last quite some time.” Following a portion of the Boston Marathon, which was canceled for the first time in it’s 124-year history due to COVID-19, the BLM movement is a “marathon, not a sprint,” Kadambi said. The walking route started at 19 Commonwealth Avenue, outside Boston College, and took protesters all the way down to North, where the speakers took to the podium set up on the bleachers.