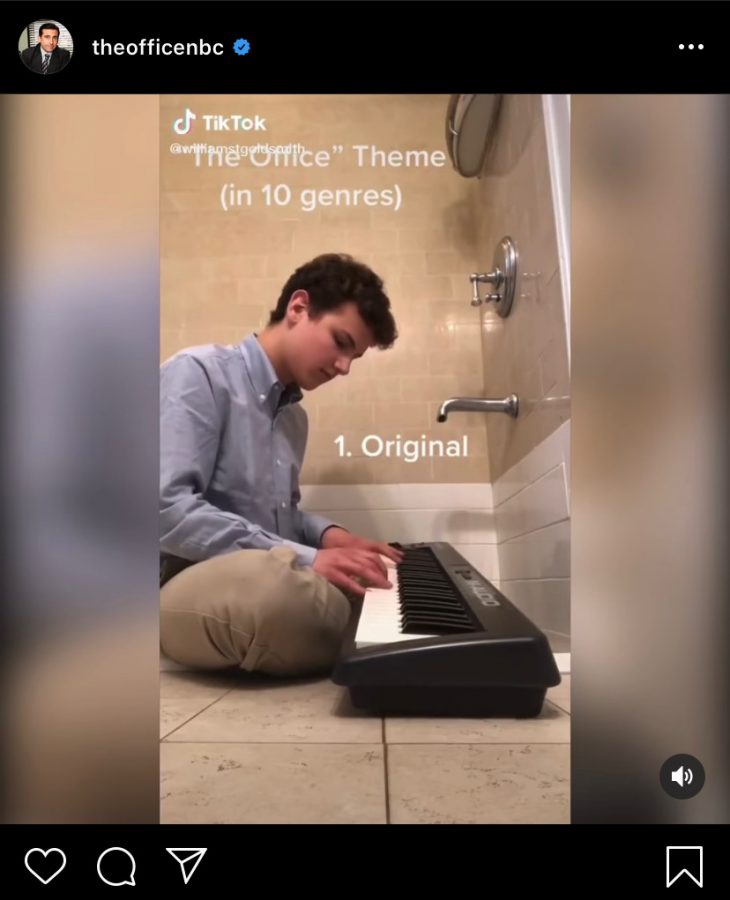 In the past few months, sophomore Will Goldsmith has taken to social media to post covers and renditions of various popular songs. He loops guitar lines, makes beats, and improvises in posts to his tens of thousands of followers across all platforms.

One of Goldsmith’s videos, a cover of The Office theme song, has gained a particularly large amount of attention, racking up almost 5 million views on TikTok and widespread praise. Goldsmith’s video covers the sitcom’s theme song in 10 different genres, including jazz, trap, country, and metal. He is seen playing guitar in some genres and the keyboard in others.

“I think that just the show itself and its popularity helped a ton,” Goldsmith said. “People who aren’t even into music or don’t even care about listening to music” could enjoy the video too.

Goldsmith said he recorded the audio to the theme song cover two years ago and posted it to YouTube. Recently, he realized the video could gain broader popularity and posted it to TikTok, where it went viral. Goldsmith added that he was inspired by YouTuber Andrew Huang’s multi-genre videos and was surprised to find that no one had used the idea on The Office theme song.

“First, I made a list of genres that I could do,” Goldsmith said. “I sort of had a vision and an outline of each one in my head before but a lot of it came as I was creating it.”

With the success of Goldsmith’s video came attention from high profile social media accounts. The Office’s official Instagram account and Complex, a media company, both reposted the video. Goldsmith said that while he expected the video to do well, he was really happy to see just how far it got. He was especially glad to see that Rainn Wilson, who plays Dwight in The Office, commented on the video. Goldsmith’s video even gained recognition from John Krasinski, who plays Jim in The Office. Krasinski played the video during the credits of his YouTube show Some Good News.

Goldsmith, who has been posting his music to Instagram and TikTok since February, gained thousands of new followers from his viral video.

“I’m not going to be shooting for more viral videos probably unless I come up with more ideas like that,” he said. “I’m gonna be doing whatever content I feel like truly represents where I am musically.”