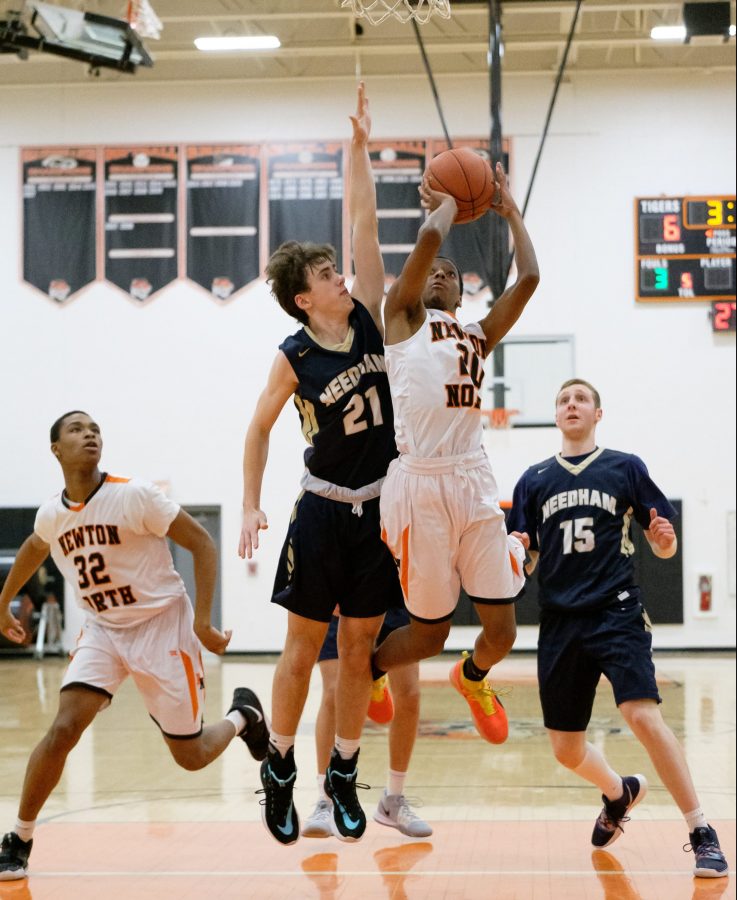 North struggled on offense early and trailed the rest of the game. “We had to play uphill the entire game,” said special education teacher Paul Connolly, the head coach. “We got outplayed, we got out-toughed, and they were the better team.”

In the first quarter, Needham made two layups despite being fouled by North defenders. The fouls allowed Needham to complete a three-point play and gave Needham a commanding 15-6 lead. At the end of the quarter, Needham led 17-8.

“It just kind of snowballed there,” said Connolly. “We had to play uphill the rest of the game.”

At the start of the second quarter, North continued to struggle on offense, unable to match Needham’s aggressive defense. Turnovers by the Tigers led to many fastbreak opportunities for Needham. Needham junior Tim Reidy played well, scoring a game high of 23 points.

“Their point guard was able to get loose,” said Connolly. “That really did a number on us.”

However, late in the first half, senior Shawn Brothers drained a three from deep, making it 23-18, regaining momentum for the tigers. Needham ended up leading 25-18 at the close of the half.

Early in the fourth, senior Khalil Lofton drained a heavily contested three pointer that gave the crowd something to cheer for. However, Needham held on to their lead throughout the remainder of the game.

“Despite not playing that great, I thought the guys showed some pretty good character,” said Connolly. “In sticking together, and fighting all the way to the very end of the game.”

North 13-4, defeated King Philip Tuesday in the first round of the MIAA South Division One tournament. For the second round, they will play Needham once more Friday, Feb. 28 away.