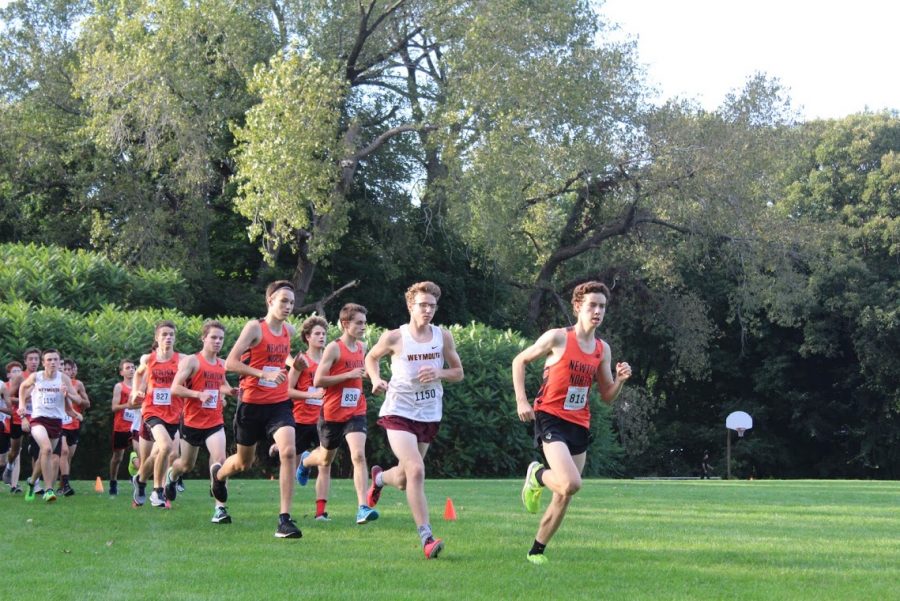 Boys' cross country dominates the front of the pack at the start of their race against Weymouth Wednesday, Sept. 11.

Boys’ cross country, 5-4, improved its team culture but battled several challenges at the end of the season.

According to senior Alex Ivanvov, a captain with seniors Shawn Evans, Ian Horsburgh, and Sam Strymish, the team had a record of .500 before their last meet. “We were hoping to win that, and we had some people really step up and perform really well, which was awesome,” he said.

According to head coach Lou Pearlman, injuries and illnesses near the end of the season prevented the team from performing at their full capacity. “It was a good year, but we didn’t quite reach our goals,” he said. “I had higher expectations for the team, and we lost a couple more meets than I had hoped.”

Pearlman added that the change in coaching was challenging for upperclassmen. “Overall, the team adapted to the changes really well,” he said. “It was more of a challenge for upperclassmen because they’ve had three coaches in the last few years.”

In the face of these challenges, Pearlman praised the seniors’ leadership and performance. “Our top three runners, Ian Horsburgh, Alex Ivanov, and Sam Strymish, really excelled this season and set a great example for some of the underclassmen on the team,” he said. He added that Horsburgh and Ivanov were unable to perform well at the Sectionals meet due to injuries and could not compete at the All-State meet, but Strymish represented the team.

According to Ivanov, the team also focused on improving communication between the freshmen and upperclassmen. “We had a lot of good freshmen this year,” he said. “At the beginning of the season, we were very individualized. Towards the end of the season, seeing the freshmen succeed, especially in how they grew and incorporated themselves in the team, was really amazing to see.”

Most team members will continue running this winter as part of the indoor track team. “We’re all looking forward to indoor track and maintaining our 22-season undefeated streak,” he said. “I think what we did this season will help us step into that.”