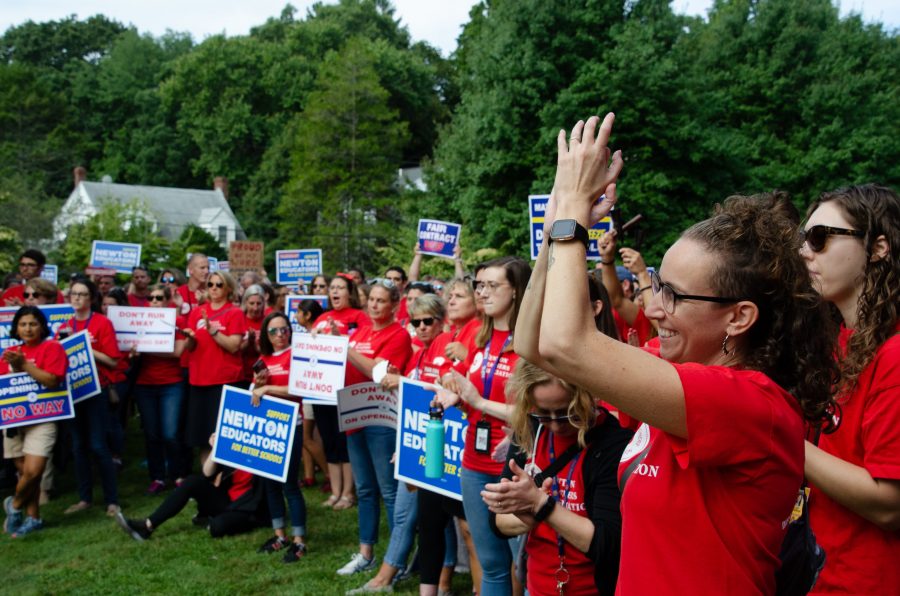 Teachers rally outside of City Hall to push for a contract settlement Wednesday, Aug. 28. (Photo by Joel Schurgin)

While the two groups have agreed to a contract in principle, a final settlement will not be reached until all details are ironed out and both the committee and the full membership of the union vote on the contract.

“We’re really excited that the contract is settled,” said School Committee chair Ruth Goldman. “It’s a good and respectful contract, and we’re really glad we were able to settle something that’s going to benefit the public schools and students and families over the next few years.”

Goldman said that increased funding for NPS eased negotiations, allowing for both groups to reach an agreement. “The mayor promised us some extra funding, so we felt that we were in a much better position to give the teachers the contract we felt they deserved,” she said.

NTA president Michael Zilles said that the new contract includes a variety of benefits for members, including “fair and flexible cost of living increases, a much improved parental leave policy, better working conditions for aides and behavioral therapists, and protections for people who were injured on the job.”

The final details of the contract won’t be made public until some minor changes have been finalized, according to Goldman. “We want to make sure that the agreement is clear and says what we want it to say.”

Despite spending 15 months negotiating, Goldman said the School Committee and the NTA were able to collaborate and reach a mutually satisfactory contract.

“The process could have been a little faster, but what worked great was having good groups at the table,” Goldman said. “The union and the School Committee had great teams, and the environment was pretty collaborative. There were a lot of complex issues, and we worked through them pretty well.”

He added that the agreement will only be finalized after it is ratified by both groups. “We have to share all the details of the agreement that we reached with our members. Then, all the members are invited to come and vote. If it’s ratified, then we communicate that to the School Committee, and they have a vote. If both groups ratify the revisions, we incorporate them into the old contract.”