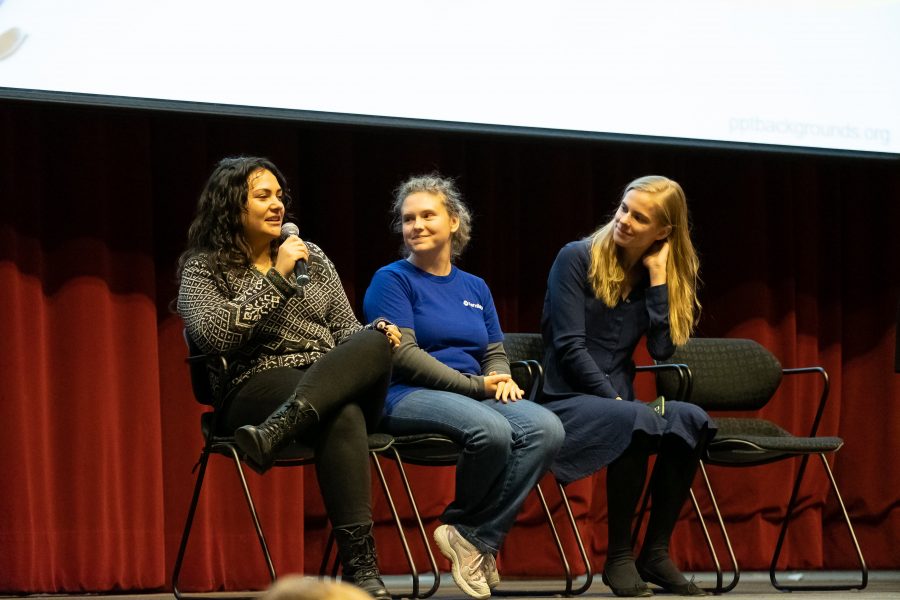 A panel of women working in STEM professions spoke during a-block of Women in STEM Day. (Photo by Ian Dickerman)

Speakers and panelists encouraged students to persevere in the face of challenges and hardships during the second annual Women in STEM Day Friday, Nov. 8.

Seniors Julia Davis, Ali Lee, and Yesha Thakkar organized and hosted the event, bringing in guest speakers from around the community. According to chemistry teacher David Bennett, the faculty-coordinator for Women in STEM Day, the day was meant to raise awareness of the obstacles women face in STEM careers and to celebrate female achievement in these fields.

Multiple speakers addressed the social importance of having a diverse group of people, including women, in STEM careers.

Oneeka Williams, a urologic surgeon, talked about the lack of representation and opportunities for women pursuing STEM careers during g-block. (Photo by Ian Dickerman)

According to Beverley Setzer, a BU graduate student studying neuroscience, representation is an important motivator. “When I decided to go into STEM, I had role models. Underrepresented minorities need role models to know it’s possible,” said Setzer.

Setzer and another BU neuroscience student ran a stand on Main Street during e-block, alongside other organizations and clubs including Ligerbots, iRobot, Envirothon, and Science Team.

There are challenges to the STEM field regardless of gender, added Setzer, “There’s a big drop off from people who start and people who finish pursuing STEM.”

“When I first started, I understood none of it, but that was what made it really awesome,” said Fortman. “It enabled me to learn a lot of different things.”

“It’s okay to fail,” said Gorelik. “Just make sure you learn from your mistakes.”

Doctor Oneeka Williams, a urologist at St. Elizabeth’s Medical Center, highlighted that positive actions and passion, urging all students to work toward their own goals and disregard those who may try to limit their goals.

“We will all encounter the positive and negative, but we have to determine how to react to the negative things. We have to decide whether to hold onto and dwell on them or to move past and learn from them,” she said g-block.

Williams added that surrounding herself with positivity led her to overcome obstacles she faced from others as a woman of color in the STEM field.

One obstacle that many women face is pay inequality, as Hiral Desai, a senior engineering manager at Cadence Design System, discussed b-block. She added that the lack of women in engineering can make it difficult to pursue the field.

Desai encouraged women to speak out against these inequalities in STEM careers and to advocate for equality.

“Develop a mindset of ‘if you see problems try to fix them,’” Desai said.