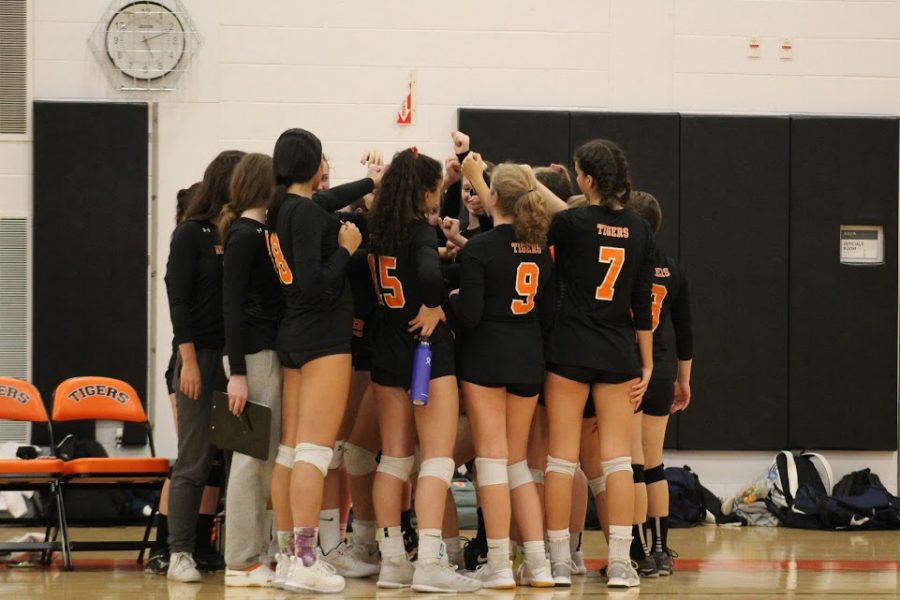 Girls' volleyball celebrates after a win. (Photo by Joelle Sugianto.)

A handful of returning players have stepped up for girls’ volleyball, 14-1, compensating for the loss of seven graduates, including Chelsea Simmons ’19 and Ashley Wang ’19. North, ranked first heading into the playoffs, advanced to the Division I Sectional Semifinals with a 3-0 win over South on Monday.

According to senior Kayla Rigoli, a captain with seniors Caroline Alexander, Christina Butera, Anna Gately, and Liisa Halloran, last years’ underclassmen “just stepped up, because in the offseason, we realized that we wouldn’t have the same team as last season.” She added, “So people just worked a lot harder in the offseason than they might’ve last season.”

Rigoli pointed to the performances of Halloran, junior Makayla Marrucci, and sophomore Carlotta Menozzi as key performers in the team’s success so far. According to Rigoli, Marucci, an outside hitter, “hadn’t hit before this season, but has been amazing so far.” After losing both setters from last season to graduation, Rigoli said that Menozzi has “really stepped up in their place.”

For the rest of the playoffs, Rigoli has immense hopes for the team and believes that reaching the State Finals again is a possibility. If “everybody’s into it and has a positive attitude like with the game against South, then my expectations are pretty high,” Rigoli said

Head coach Richard Barton said that North’s performance against South was a positive indication for the rest of the playoffs. “If we play like that again, that’d be an excellent event,” he said. “Everybody played strongly yesterday, which in any given set, isn’t always the case.”

Rigoli noted that the team must improve in several areas to continue their run in the playoffs. “Our serving needs to be more consistent,” she said. “Our passing needs to be really good on services, the hitters just need to hit really hard, and we need to be able to hit it across court more consistently.”

The Tigers take on Boston Latin in the MIAA Division 1 Sectional Semifinals at 6 p.m. this evening.