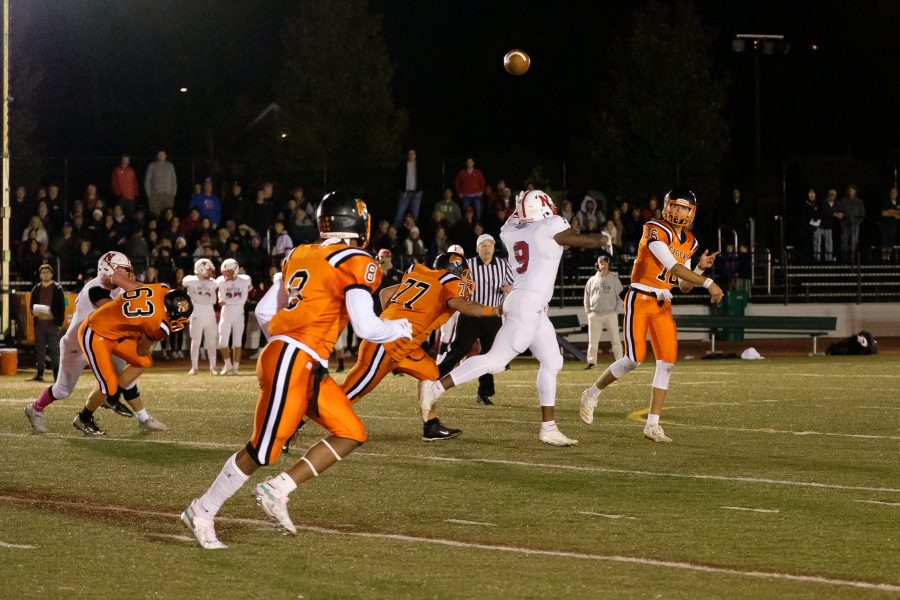 Football lost to sixth-ranked Natick 35- 6 at home on Friday in the annual Friday Night Lights game. According to senior Nolan Boyer, a captain with seniors Michael Coscione and Andrew Landry, the team “brought the effort” but “failed to capitalize when it counted.”

Boyer noted that the team made several key stops on each side of the ball. “We had a couple of great drives on offense, but sadly we didn’t capitalize in the endzone.” He added, “We also had a few stops on ‘D’ to get off of the field on fourth down.”

Natick scored first with a four-yard touchdown rush by junior Jalyn Aponte, the halfback, in the first quarter.

A 29-yard field goal from North junior Max Ranta in the second quarter brought the score to 7-3. The Redhawks then increased their lead with an 11-yard scramble from junior Will Lederman, the quarterback. The Tigers added to their total after Ranta converted a 24-yard field goal, decreasing Natick’s lead to 8.

In the second half, a passing score from Lederman along with a combined three rushing touchdowns from Aponte and senior Terrence Cherry allowed the Redhawks to increase their advantage to 35-6.

Despite the loss, Boyer gave credit to the play of the Tigers’ offensive and defensive lines against Natick’s talented linemen.

“They handled one of the best defensive lines in the state, playing kids who were literally double their size,” he said.

According to Boyer, the team “still did everything to prepare for the game,” despite injuries and missing players on the line.

North, 3-3, faces the undefeated Milton Wildcats on Friday night away. “If we want to go into Milton and break their win streak, we have to play two halves of well-executed football,” Boyer said.