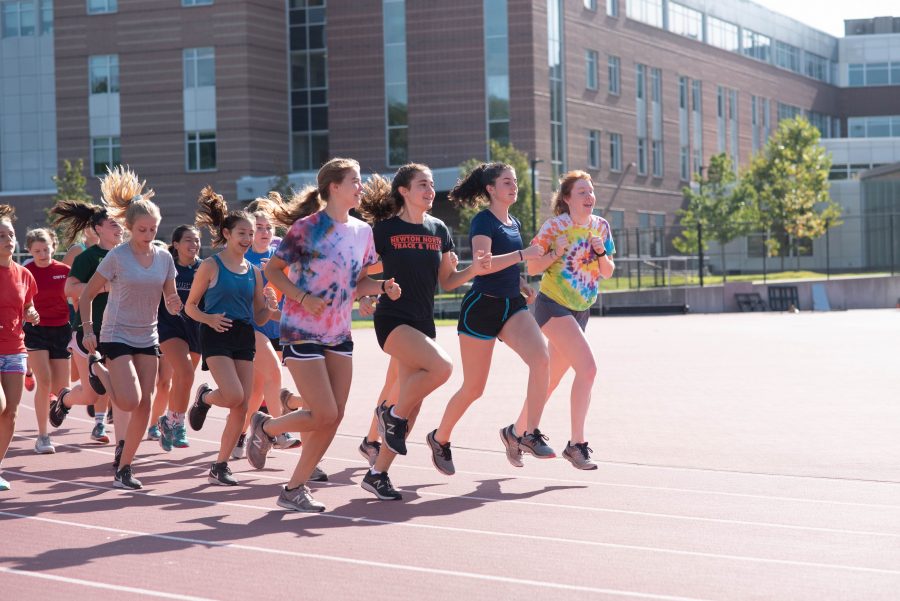 Members of girls' cross country practice on the track at Dickinson Stadium.

Girls’ cross country lost to Natick and Milton on Wednesday at Houghton’s Pond in Milton, by a score of 38-20 and 34-23, respectively. Despite racing on a “difficult” course, the team “killed it and made us feel so proud and lucky to be on a team of such strong women,” according to senior Sonya Gelfand, a captain with seniors Kendra Abbott, Lucy Bronstein, and Helena Texeira-DaSilva.

Texeira-DaSilva placed first for North and fifth overall, finishing in a time of 19:37. Sophomore Charlotte Kourierez finished seventh overall in the meet, with a time of 19:44.

Gelfand pointed to the team’s spirit as a highlight of the race. “Half of our team raced the JV race, and half raced the varsity race, so whenever one group was racing, the other group would cheer them on and show their support all throughout the course,” she said.

Gelfand added, “We had so many girls waiting at the finish line to congratulate their teammates for completing the race, and to help them out if they were in pain or needed water.”

Racing against the defending State Champions in Natick and the 2018 State Champions in Milton, Gelfand said that the team won’t be discouraged by the loss and will continue with the same practice routines moving forward. “I think for the next meet, we should keep doing what we’re doing, both during meets and during practices,” Gelfand said. “It’s still pretty early in the season, so we’re still building up strength and, for some newcomers, learning about cross country as a sport,” she added.

North, 2-4, will race at Needham this afternoon.