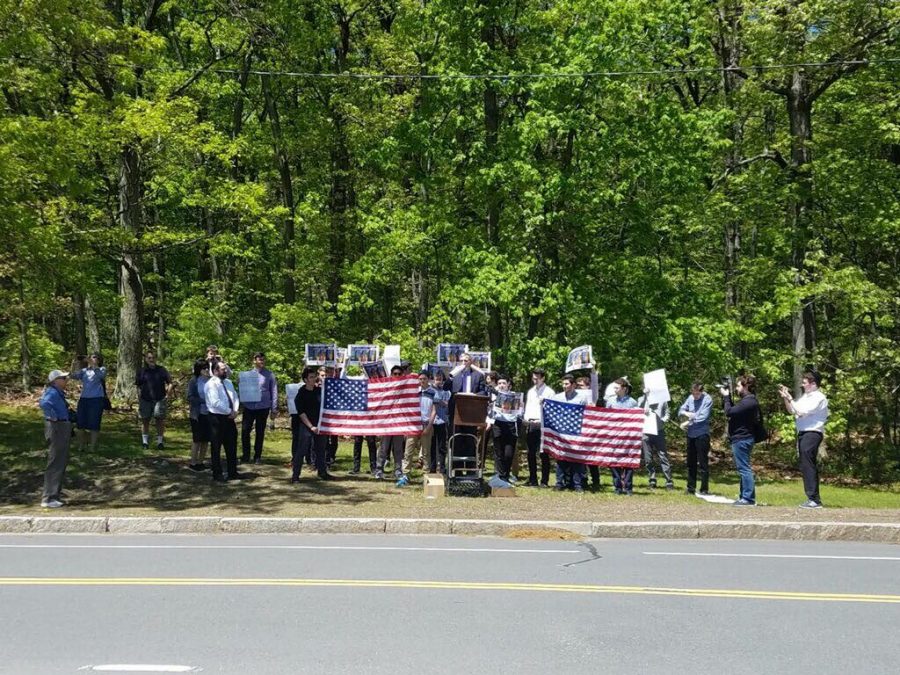 Students and staff from the Rambam Mesivta school in Lawrence, NY protest at South Tuesday, May 21. (Photo by Amy Huang)

Roughly thirty students and staff from a private Jewish high school in New York protested at South against alleged anti-Semitic and anti-Israel history curriculum yesterday, Tuesday, May 21 at 1 p.m.. The group came from the Rambam Mesivta school in Lawrence, NY.

In an interview with the NSHS Denebola, the school dean, Rabbi Zev Friedman, said, “What brought us here is the sad reality that Newton South High School, amongst other schools, is actually teaching a false and inappropriate curriculum, and a curriculum which expunges certain things we think students should be exposed to.”

In response to the rally, South students gathered across the street, outside the main entrance. Some sang the national anthem and shouted back to the New York students.

“I think the very choice they made to come, and the way they did it, created this kind of back and forth, or this adversarial situation that didn’t have to be the way had they chosen,” he said. “I think there was a real opportunity for sharing opinions and learning from each other that was missed in this process.”

There was no direct contact between South and the Rambam Mesivta school administrators both before and after the rally.

The protest comes after a series of allegations of bias in the past years, including most recently, a lawsuit filed against School Committee members and administration and faculty members at Newton Public Schools.

Superintendent David Fleishman stood by the School Committee’s previous decision that there is no bias in the curriculum.

“I actually thought it was sad that students were coming from New York to hold a rally here, where I just don’t think that’s an issue,” said Fleishman. “Given the terrible anti-Semitic acts that have taken place recently right here in Arlington and Needham, I really think it’s important to focus on real anti-Semitism.”

The Rambam Mesivta school received a permit to protest from the City of Newton. Police officers, who were present to ensure safety, prevented media and students from crossing the street to the protest.