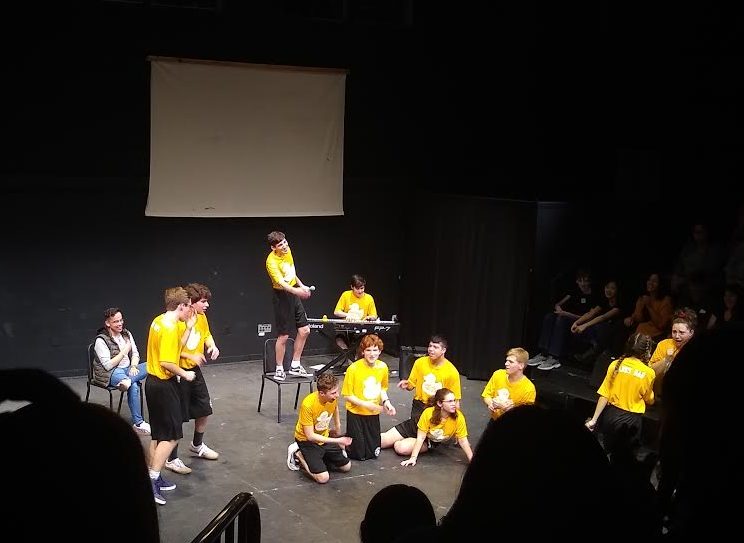 Audience members excitedly ran onto the stage to collaborate with cast members during Spontaneous Generation’s (Spon Gen’s) several memorable improv games. Using their creativity and with the assistance of quick-thinking actors, the audience helped create a funny, dynamic, and enjoyable performance.

Directed by seniors Corey Gelb-Bicknell and Andrew Ruttenberg, the show ran April 3, 4, 5, and 6 at 7:30 p.m. in the Little Theater and featured several improv games that incorporated audience participation and enabled North actors to show off their witty thinking.

“It’s just such a fun process because usually, people don’t have a ton of improv experience going in,” said Ruttenberg. “Improv is a very nerve-wracking thing. I remember my first year I was doing it, I was terrified of it. Just watching everyone come out of their shell and become more comfortable through the process is always fun.”

Improv is theater scenes that are created on the spot. In the improv games, the cast relied on audience participation to give them ideas for some scenes. In one particularly entertaining improv game, audience members brainstormed activities such as “scuba diving” or “making a strawberry smoothie” but changed fundamental aspects. In the “making a strawberry smoothie” scene, audience members decided that instead of using a blender to make the smoothie, the actors would use a skeleton and instead of using strawberries, they would use blood. Additionally, a skull would replace the cup.

The actors wrote the audience’s final ideas on a whiteboard to refer to later. Then, after deciding these main ideas, actors acted out the scene without talking to Ruttenberg. He eagerly guessed the elements in the scene while facing away from the whiteboard.

Ruttenberg said he knew the actors were referring to fruit, but he did not make the connection that it was a strawberry until actor Téa Baum depicted a straw.

“When we were trying to get strawberry, I was like, ‘oh it’s a smoothie, I drink strawberry banana smoothie,’” Ruttenberg said.

Another exciting improv game played was “freeze.” The game starts with two actors engaged in a scene. Then, an audience member says “freeze,” taps the shoulder of one actor, and takes their place, doing whatever they have in mind. This enabled audience members to join scenes when they had an idea about how to shift the scene’s focus. The result was an action-packed and constantly developing scene that actively involved several audience members as their friends cheered them on from the stands. The scene’s unpredictability also made for hilarious plot twists.

In another notable improv performance, cast members brought English teacher Adam George on stage to interview him. They used his answers to construct a musical about his life on the spot. The musical left audience members, including George, filled with laughter because of its clever references back to the interview. It featured catchy song lines such as “you’re a survivor,” which referred to George’s dream of winning Survivor.

“I always love the musical, and we practice a lot to get the musical working,” said Andy Bean, a cast member. “It’s really difficult, but it always comes out as something that I think looks really well put together.”

Spon Gen also featured an improv performance about radio hosts in which actors chose their favorite idea for a fictional radio station and then hosted the station. The fictional radio stations included Junior Thesis Radio, Laughter Radio, McDonald’s Overthrow Radio, and Farm Radio. Each radio show host brought a new and different character to the table. From optimism to outrage, this was an extremely dynamic improv game.