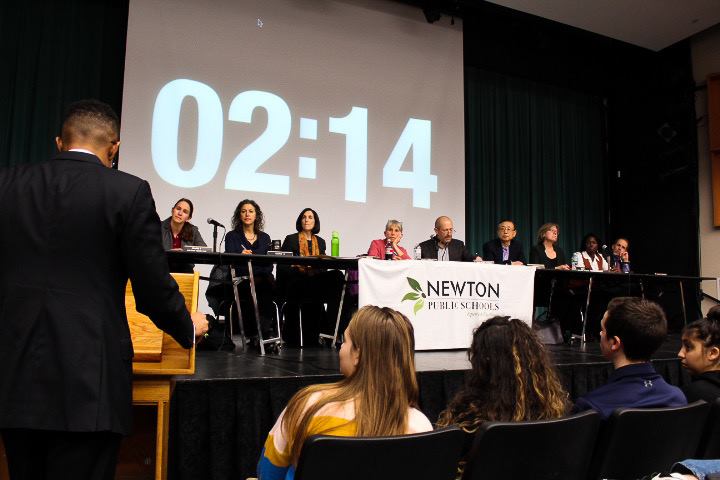 The Newton School Committee listens to an audience question during a public hearing Tuesday, Nov. 27, 2018. (Photo by Rose Skylstad)

Newton Public School (NPS) officials stand by their teachers and curriculum in response to a lawsuit filed March 12 by Newton taxpayers for failing to remove bias, anti-Israel, and anti-Semitic material from the high school history teaching material.

Following the roughly seven-year controversy between NPS, community members, and various organizations such as Education Without Indoctrination (EWI), the Committee for Accuracy in Middle East Reporting in America (CAMERA), and Americans for Peace and Tolerance (APT), the lawsuit calls for the removal of biased information from history materials, as well as a full vetting process of the history curricula by teachers, overlooked by a third party appointed by the court.

“This lawsuit isn’t really about me or any particular people named, it’s really about our district and our philosophy about how we teach,” South principal Joel Stembridge said.

Karen Hurvitz, the lawyer for the plaintiffs, added that the book, “Indoctrinating Our Youth,” created by CAMERA points out the factual inaccuracies within the history curriculum at the Newton high schools, and that no NPS official has ever responded to the book materials.

“They have never, ever refuted—nobody in the school system, not one teacher has ever refuted one fact in any of these reports,” Hurvitz said. “You know what they say? ‘We’re teaching it and we’re going to continue to teach it and we don’t care what you say about it.’ What kind of a response is that?”

Stembridge said that the high schools are not teaching biased information, but instead providing facts on the complicated condition in the Middle East.

“I don’t think we teach in a biased way,” Stembridge said. “We provided balanced views from all sides and asked students to deal with the fact that it’s a complex situation and let them come to their own opinions about what’s going on in the world.”

Superintendent David Fleishman, along with mayor Ruthanne Fuller and the School Committee, put out a statement to “strongly disagree with the accusations” the day after the lawsuit was filed.

Stembridge added that when teaching about difficult topics such as the Israeli-Palestinian conflict, differentiating facts from opinions is important.

“When one side wants us to teach history from their viewpoint, that’s something we’re always not going to agree with,” Stembridge said. “We’re always going to want to provide our students with information about how complex our world is and that well-meaning, well-intentioned people can vehemently disagree about some very simple facts.”

Fleishman added that the lawsuit and past public records requests have been a disturbance for teachers from doing their job and focusing on their students.

“I don’t think there’s anything to settle. I don’t know what we would settle,” Fleishman said. “We need to keep doing what we are doing in terms of providing kids with an excellent and thoughtful education. Lawsuits are basically a distraction and they take unnecessary time and energy when we should be focusing on supporting the academic and social-emotional needs of students.”

Hurvitz said that although not a plaintiff in the lawsuit, APT has provided much of the evidence of the lawsuit through public record requests dating back to the 2016-2017 school year.

Executive Director of APT Ilya Feoktistov added that he has submitted public record requests on and off for the last seven years and that Fleishman has been “withholding public records” and “lying about public records that he claimed didn’t exist but do exist.”

“He’s about to have another lawsuit on his hands because they’ve been completely disregarding the public records law,” Feoktistov said. “If it comes, it would be from me, absolutely. Because I’m the damaged party, I asked for something that was my right under the law, and remember, all citizens have a right under the law to this information.”

Last November, the School Committee assessed and deliberated the history curricula in response to a petition that called for an increase in transparency, a halt to biased history curricula, and the termination of Fleishman’s contract as superintendent. The petition was signed by roughly 160 people, surpassing the 50 signatures necessary to hold a public hearing. After hearing from all speakers, the School Committee voted 9-0 “no action necessary” for all seven requests on the petition.

The plaintiffs are Alan Dechter, Leon Kadis, Merry Smith, Traute Marshall, Rebecca Katz, and George Flesh. They are all community members who once had children in the Newton schools.

Fuller, along with defendants Bedar, Goldman, Morrill, Rinaldi, and Turner would not comment on the lawsuit.