North wins first South Sectional title in over a decade 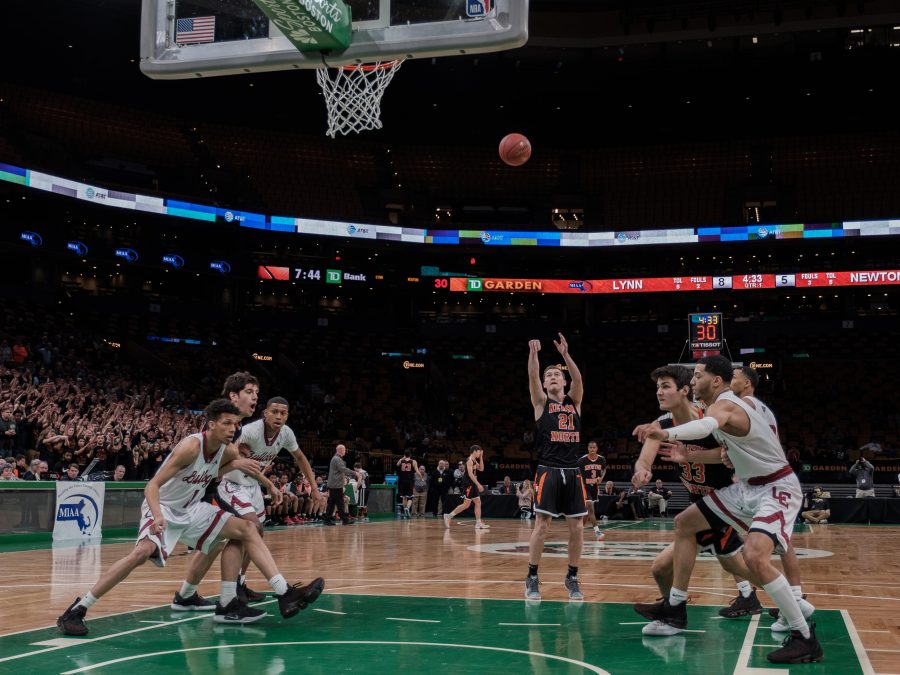 Junior Grayson Hargens shoots a free throw during during the State semifinals against Lynn English on March 11.

“We prepared for them. We were ready,” said special education teacher Tom Connolly, North’s head coach. “I felt like we were prepared and the other team, Lynn English—they played great.”

North’s defense started off strong on the defensive end, forcing a turnover and then drawing an offensive foul. However, as the first quarter progressed, the defense began to breakdown. Lynn English’s accurate shooting led to a 18-3 run for the Bulldogs. During the run, Lynn English’s senior Alonzo Linton and junior Jarnel Guzman dropped seven and nine points respectively. Guzman went on to score a game high 22 points, and Linton finished with 20 points. As well, Lynn English’s sophomore Jack Rodriguez finished with 19 points. At the conclusion of the first quarter, North found themselves down 22-10.

“Their big three had huge games. If one of them didn’t have the type of game they had maybe we might have been in it a little bit more,” said Connolly.

In the second, Lynn English continued its strong performance, pulling ahead 30-14. In response to the Lynn English run, North junior Tyson Duncan drained two three pointers. However, Lynn English defended their lead behind another seven points from Linton, and the half ended with the Tigers down 38-25

During the third quarter, senior Ezra Pemstein, a captain with senior Christian Negrotti, ripped the ball out of Lynn English junior Mason Jean Baptiste’s hands while he went up for a layup. The block marked a shift in momentum, as North went on  a 10-4 run. As usual, Lynn English responded to North’s run. Rodriguez scored eleven points in the quarter, helping Lynn English to regrow their lead to 13 points.

Linton and Guzman took over in the fourth, while North looked defeated, turning the ball over in crucial situations. Midway through the fourth the game was sealed and all the starters checked out.

“They outplayed us,” said Connolly, “Both teams were really good teams. They just played better than us that night.”

Connolly added, “We played uphill all night. I am not ashamed at all. I am extremely proud of the effort and what are guys did all year long.”

North finished the season 21-6 after starting the first seven games 4-3.

According to Connolly, “Ezra and Christian were incredible leaders. Kyle Ray-Canada and Liam Scanlon as seniors did an unbelievable job in terms of their leadership and work ethic. Just continuing the culture of our program.”