BLAC members wait in the wing for presentations to begin. (Photo by Ian Dickerman)

Teacher panelists discussed how to engage in conversations about race in the classroom during a-block of Black Leadership Advisory Council (BLAC) Day.

Senior Miki Shibuya said that she liked seeing teachers from across departments in the panel. “There’s so much depth that you don’t have a chance to see from a diverse group of teachers in terms of academic department and their backgrounds.”

The panelists emphasized that it was important for students to play an active role in discussions and be respectful of others. Cohen said that talking about race “has never been comfortable and still isn’t comfortable” for her. However, she tries to “get students to be reflective about race to guide conversations.”

Ibokette added that it is important to understand the students are coming from different backgrounds and have different experiences, so generalization can negatively impact students and teachers.

“As an educator, it’s very important to avoid making sweeping connections and assumptions about students,” he said.

Representation plays an important role in facilitating race-related discussions. “As a minority, I expect people to look at me with a certain lens,” Reid said.“When I think about teachers that I connected to, the overwhelming majority of them looked like me – it was really important for me to see someone who looks like me.”

“The big idea is to make sure that students are comfortable talking about race,” said Lew. “It is the responsibility of both educators and students to provide a safe medium for and space for people to talk about it and to handle that vulnerability.”

The panelists added that race is an important topic to discuss in classrooms so that students and teachers can learn about different cultures and opinions.

Students in the METCO program discussed the many single-stories about black people in the auditorium b-block of BLAC Day.

The panelists also discussed their morning routines, black stereotypes, and their experiences with racism in an attempt to educate the audience.

Many of the panelists urged people to stop touching their hair and asking about their hairstyles. They mentioned students coming up to them and asking if it’s real.

“Hopefully the panel will allow people to speak out more and learn that some things that are simple to others, will be hard for some,” said junior Amar Skelly. 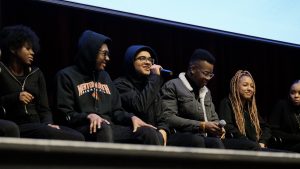 Skelly added that many people have the stereotype that black students either have an afro, wavy hair, or a fade.

Freshman Spencer Eng said that he learned a lot about the trouble it was to be black, and the negative effects of generalizing.

“Stereotypes and what you see in media can impact how you see the entire black population,” he said.

“My life and what I went through is not a sob story. It’s a warrior story,” said guest speaker Fadayz, who founded a self-expression center in Somerville, MA. Fadayz spoke about his childhood and the lessons he’s learned throughout his life c-block of BLAC Day.

During his presentation, Fadayz spoke about his difficult life as an African-American and how he looks back at it now. “All my life has been a struggle. I had no idea why so many people wanted to hold me back.”

Fadayz grew up in the foster care system in Hartford, Connecticut, living in a neighborhood with a lot of crime and violence, adding that he often lived without food, heat, or lights.  He encouraged the audience to be aware of and understanding to students that may be facing similar issues.

According to Fadayz, he was able to overcome adversity by finding strength through music and dance. He added that his story makes him a warrior, and he “will not go under any other name.”

Although he is African-American, he does not refer to himself as African-American or black. “I stopped using words like white people and black people,” he said. He added that race is not important to him and said, “I don’t care about diversity and segregation. I care about community.”

Throughout the presentation, Fadayz also gave the audience advice. “When you speak, you should always speak loudly and proudly,” he said. “You are as individual as your thumbprint. Don’t spend your life chasing who you are because you are already yourself. Reach into your core and see what really drives you.”

Students in Jubilee performed music of the African diaspora e-block of BLAC Day.

The group performed a type of music that describes the mass dispersion of peoples from Africa in the forms of chants and songs. Typically the songs center around hope and battling against oppression.

“It was supposed to be fun and interactive,” said BLAC officer Drew Bookman. “Since Jubilee focuses on the songs of the African Diaspora, I thought it would be a great idea to have them perform.”

Jubilee music director Sheldon Reid said that the group works together as a community to perform and bring awareness.

“Everyone is singing together and contributing,” he said. “We’re all a part of this community and it’s our job to work together to perform.”

The singers started with the song, “Voices Of Freedom.” Reid explained to the audience that the song is about protesting and fighting against segregation. Reid chanted to the group during the song, and they sang back to him in response.

As the show progressed, the Jubilee singers sang songs such as “Be Like Him,” and “We Have Heard Angels.” In “Be Like Him,” Jubilee performs a song in Zulu highlighting hope in the future. The song featured an upbeat track and the singers encouraged the audience to clap along.

Reid later had the singers perform a song called “Hold On.” The song contained powerful choruses talking about persevering and holding on through times of difficulty, showing the main themes of African Diaspora music.

BLAC members taught students and faculty popular dances to share cultures and teach the importance of accepting all races in the Little Theatre g-block of BLAC Day.

“I think it’s really important to share cultures and these dances because dancing has always been a part of black culture and will always be,” said Junior Zoë Kronberg, “I think dance is a way for black musicians to show how they’re feeling about popular ideas right now. It’s really important for the younger generation to learn them.”

Officer of BLAC, senior Drew Bookman, taught students dance moves such as “the dougie”, “the shoot”, and more. “Everyone thinks BLAC Day is just for the black kids and that it’s just their day, but it’s not,” she said. “It’s a really inclusive day, and I really wanted to make people aware of that.”

Bookman brought students of all grades and races onto the stage to help them learn the new dances. The BLAC members, along with volunteers, split into two groups for each round and tried popular dances with a few minutes to prepare. At the end of the show, a large group of students gathered in the center of the room and danced.

“Just from being in the audience, I got the full experience of being part of a fun, accepting group,” freshmen Betty Smythe said. “I think learning about and sharing cultures is very important, and I think this really conveyed it.”

Students took part in an on-stage activity meant to bring light to the privileges people have and how it affects society f-block of BLAC Day in the Auditorium.

In the activity, BLAC members asked participants to step forward or backward if certain statements were true of them. The activity included statements regarding intersectionality, skin color, and neighborhood violence.

At the end of the activity, the participants had formed a line of most to least privileged based on the answers to the statements.

Senior Achille Ricca said that he hopes the audience was able to understand the commonality and power of privilege.

“Privilege isn’t a dirty word,” Ricca said. “Everyone has privilege in some way or another. It’s how you use it that counts.”

As students stepped forward and backward, Ricca said that he hopes the activity will help student see that they’re not alone.

“Someone in my situation may feel more comfortable seeing me step,” he added.

At the end of the activity, the participants were given paper crumpled up into balls and asked to throw them into a basket at the front of the room. Those who were least privileged were farthest from the basket, representing the difficulty for those with less privilege to complete the same tasks as those with more privilege.

“It was a good, meaningful program I’m glad I got to witness,” said freshman Hunter Young. “It heavily encouraged to reevaluate my prejudices, which is generally a good thing.”