Roy wins CTE Student of the Year Award for Drafting 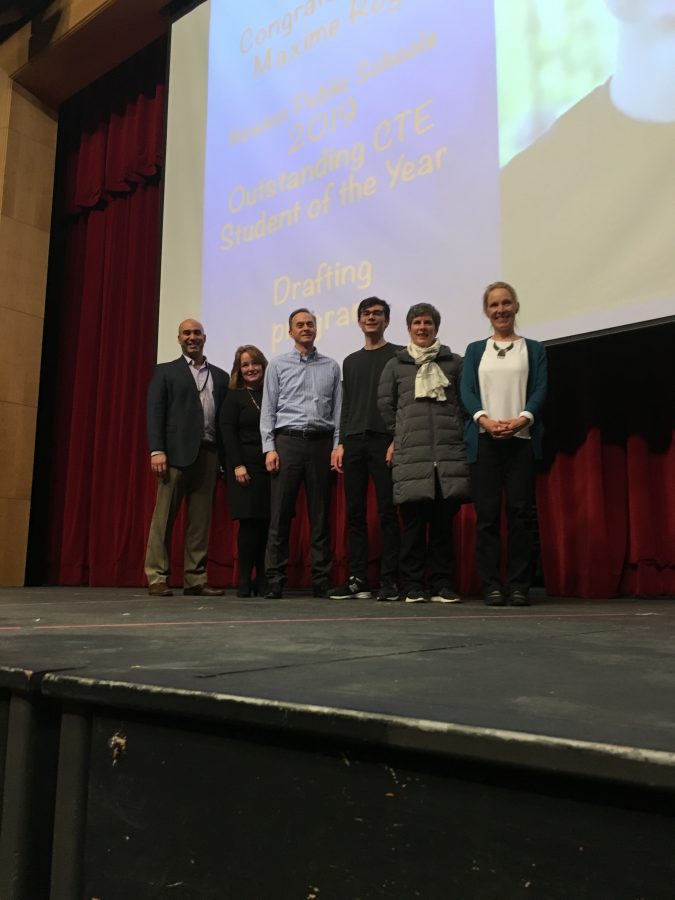 Max Roy receives the CTE Student of the Year award in the auditorium on Thursday, Feb. 7. (Photo by Maya Demissie)

Senior Max Roy, a Major 3 student in the drafting program, received the Career and Technology Education Outstanding Student of the Year Award b-block Thursday, Feb. 7 in the Auditorium.

In order to be nominated, students were required to have a minimum GPA of 3.5, leadership qualities, work experience related to their career of study, extracurricular activities, and community involvement, according to Kathleen Duff, the Director of Career & Technical Education.

“Honestly, I’m really surprised that I won the award,” Roy said. “I never thought that I would be considered the Student of the Year. It’s just crazy.”

The other nominees for the award were seniors Ben Gobler, a Graphics major, and Kamilla Salazar, a Culinary major.

“Max was a great example of someone who is well-rounded, has done incredible work, and is very focused on his career as an architect,” principal Henry Turner said. Turner also said that he believes Roy will become a “pretty amazing architect.”

Roy joined the Drafting Program his freshman year, and continued through the program, working on projects such as a drawing of a house he completed at the Boston Architectural College summer program. “I’m just proud of being able to come this far in drafting,” said Roy.

Roy plans to further his interest in architecture after he graduates. “I’m planning to go to college for architecture,” he said. “That’ll basically take me through college hopefully, and I’ll be able to go on to an actual career.”