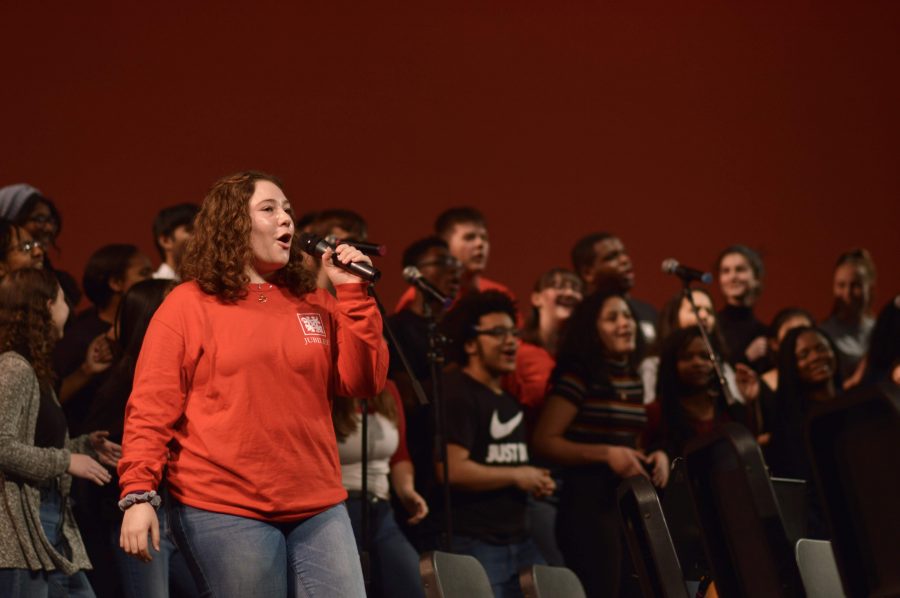 At this year’s annual holiday concert, green and red lights shone throughout the auditorium, Christmas carols filled the room, and the holidays truly felt on their way. Featuring Concert Choir, Family Singers, Jubilee Singers, Orchestra, Symphonic Band, Tiger Bebop and Wind Ensemble, the concert, which took place during e-block Thursday, was a celebration of festive cheer and merriment.

The performance is the only official in-school concert, which according to junior Dina Gorelik, a member of Family Singers, is “very important so that everyone can experience the North music program, not just our parents.” She added, “We generally sing contemporary fun music, which is a nice change of pace” from the “older, more classical choral music” that Family Singers normally sings.

The concert started with Orchestra, Wind Ensemble, and Symphonic Band playing “Sleigh Ride” by Leroy Anderson. The lively song, conducted by music teacher Adam Grossman, drew the audience in with its combination of orchestral and band instruments, percussion, and whip-cracking to top it all off. The song felt invigorating and joyful.

The next song, “Christmastime is Here,” by Vince Guaraldi, ran counter to the lighthearted spirit of the first. The melancholy song highlighted some of the specific instrument groups, giving, for example, the flutes time to shine. It was a blend of calm and blue that was a nice balm after the chaotic glee of “Sleigh Ride.”

Jubilee Singers performed later, singing “Angels We Have Heard on High.” The performers, conducted by Jubilee director Sheldon Reid, infused the song with vigor and passion, the performers energetically clapping and swaying back and forth. Senior Rene Miller led the group with her beautiful, clear voice.

Then Tiger Bebop sang an a capella version of “Rockin’ Around the Christmas Tree,” by Johnny Marks. A refreshing and bouncy take on the classic Christmas song, the song stood out against the numerous instrument-dominated songs of the concert. The group also sang “I Saw Three Ships,” an English carol. The slightly-lesser known carol was a surprise among the other classic ones, but was nonetheless a charming moment that conjured images of ships in a wintry sea.

Family Singers brought calm to the cheer with a gentle rendition of  “Have Yourself a Merry Little Christmas,” by Hugh Martin.

“I like the concert because everyone gets a song or two and it’s a really fun time,” said Gorelik. “It’s nice to hear what other choirs are working on.”

The concert ended with a few other carols including “Carol of the Bells” and “O Chanukah.” It was a joyful hour of music full of spirit, the ideal segue into the upcoming holidays and winter break.