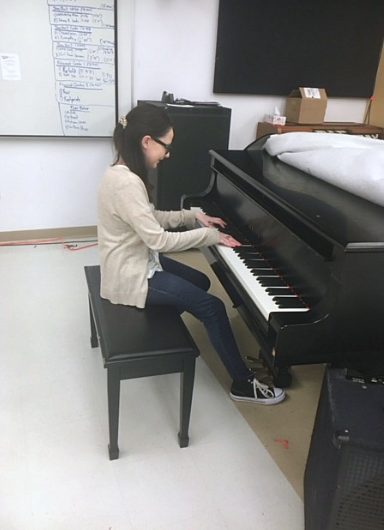 Rose Mooney ’18 remembers walking over to the piano in the chorus room. Mooney was a senior, and she was about to lead a Concert Choir class, taught by music teacher Adam Grossman. She looked nervous but gently started to play the four-part warm up. As she continued to play the notes, the students in the music room began to listen. They put down their phones, stopped doing math homework from behind the protection of their folders, and began to sing the notes as Mooney played. When the song finished, the students clapped, and a grin replaced Mooney’s nervous expression.

Now a freshman at Berklee College of Music, Mooney was highly involved in the music department during her time at North. According to Mooney, the classes and musical groups she participated in during high school provided her with a strong musical foundation. “The knowledge of theory that I learned at North helped me grow as a musician, and the ensembles I took helped me grow as performer,” she said.

In addition to taking Family Singers, Tiger BeBop, and Music Theory and serving as a teaching assistant in Concert Choir, Mooney led the a capella group Melocotones as a co-director, hosting weekly meetings, arranging music, and coaching club members. These experiences inspired her to pursue teaching music as a career, which she is currently exploring at Berklee. “I liked the chances I got to conduct Concert Choir because everyone was supportive and treated me as a teacher,” she said. Junior Lara Saouli, a member of the Concert Choir class, said, “Rose was always smiling and made the class engaging. She was very passionate about teaching us.”

In recognition of Mooney’s musical work, North’s music department presented her with the Raymond Smith Music Award during her senior year, given annually to one dedicated North musician.

When Mooney applied to colleges as a senior, her interest in music inspired her to apply to music schools—but some doubts remained. Mooney said that although her family was supportive of her decision to study music, she was aware that pursuing a music career often comes with a negative societal stigma. “People always assume musicians aren’t going to get enough money to survive. They may tell you you’re taking a risk, that you should just go to a normal school and do music on the side,” she said.

Nonetheless, Mooney said, “you should do what you love and what you’re passionate about. If that’s music, then do music, and don’t let anyone tell you that you can’t do it. I know a lot of musicians who are very successful.”

Now at Berklee, Mooney is taking the eight core classes required for all freshman students, which ensure that they can build on the same body of knowledge moving forward. “Not all students enter Berklee with the same foundation,” Mooney added.

Mooney said the material she learned in North’s AP Music Theory class provided her with a background that prepared her for these college classes, even allowing her to jump to a higher-level theory class.” In total, she is taking three required music theory classes this semester and expanding on the knowledge she picked up at North.

“I remember Mr. Grossman said if he ran a school, he would have a separate class for each part of music theory: one for ear training, one for harmony, and one for arranging,” Mooney said. “I think that’s really funny because that’s exactly what I am doing now.”

“In the music world today, you really need to know about technology,” she said.

While this material is out of Mooney’s comfort zone, Berklee students “need to be committed to learn anything about music,” she added. “At Berklee, it’s not just classical music. You can do any genre of music you choose. You can play any instrument. One person is even playing the pineapple.”

With the 12 majors Berklee offers, from Music Business to Contemporary Writing and Production, “there are a lot of options for me,” Mooney said, “but I’ve always known I want to be a teacher.”

Still, she is not sure exactly what becoming a teacher would entail. “It could include private lessons, general music classes, choral conducting,” she said. “After Berklee, I would also love to perform so I can inspire people.”

Ying Ying Rossi ’18, a member of the Melocotones, added that Mooney inspires her musically. “Singing with Rose will always be one of my favorite things to do. Her constant support and patience helped instill confidence in me as a singer,” she said. “It was equally rewarding to get to learn from her and carry out the fantastic arrangements she made.”

Still, Mooney recognized that there remains musical material for her to learn and experience to gain. “It’s definitely a lot of work. I’m learning stuff I never imagined I would have to learn.”

Ultimately, she said, “If you love music, you should just go for it.”