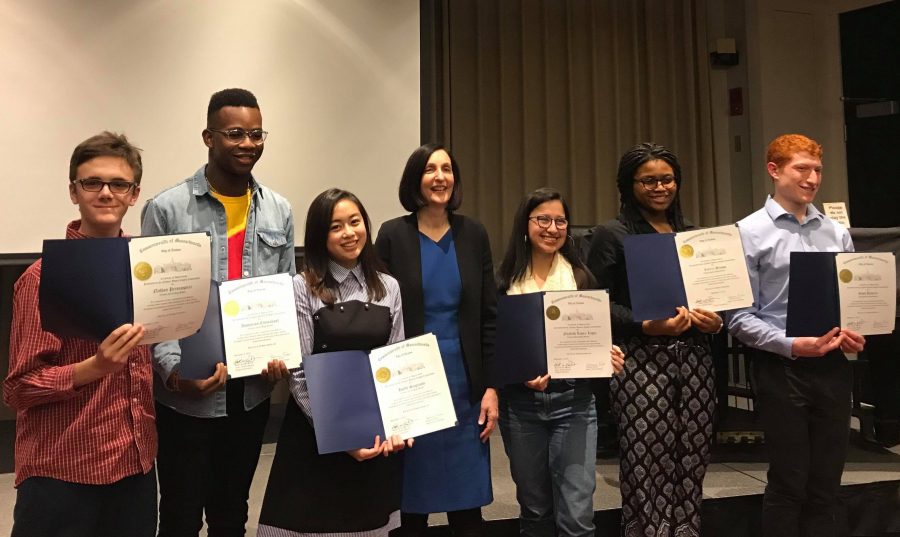 Recipients of the Newton Human RIghts Award pose for a photo with mayor Ruthanne Fuller. (Photo by Jacques Abou-Rizk)

According to the Human Rights Committee, the Newton Human Rights Award recognizes an individual or group who has improved the quality of life in Newton by promoting greater understanding and appreciation of diversity and working to reduce discrimination.

According to Sugianto, she won the award for her work with racial and cultural identity issues. “I’ve spoken in multiple panels, I did International Day, I started International Students Association this year.”

Emmanuel, who is the co-president of the Black Leadership Advisory Club, was on many panels about race, and spoke at Burr Elementary School and Horace Mann Elementary School.  He said he is interested in human rights. “I feel really passionate about it, especially when it comes to African Americans and black people and the injustice they face.”

Persampieri won the award for his work organizing an event series to watch and discuss movies focusing on people with disabilities at his church.

According to Persampieri, his motivation was to help people with disabilities, like him, and work against discrimination of all kinds. “I am passionate about the city of Newton and I think everyone should be treated with respect. I want to help the people who are marginalized and discriminated against.”

Sugianto also said her motivation is to help people.

“When I do this sort of thing I’m not doing it for acknowledgment or anything. I have worked hard on accomplishing what I believe in and striving towards making North a better community for people who feel like their voices aren’t being heard,” she said.

Emmanuel also said he isn’t involved in human rights activism because he wants an award, but rather, it is something he loves to do.

“It’s a small award, but to me, it was huge and I’m very thankful.”

Emmanuel also plans to continue advocating for equality in the future. “I hope to challenge people’s ideas on subjects like racism and human rights in general. For me personally, I don’t think you can change the way someone thinks, but a way to look forward is to challenge their way of thinking and to have conversations like that.”

All the North honorees said they plan to continue their work in human rights throughout their school years and the rest of their life.