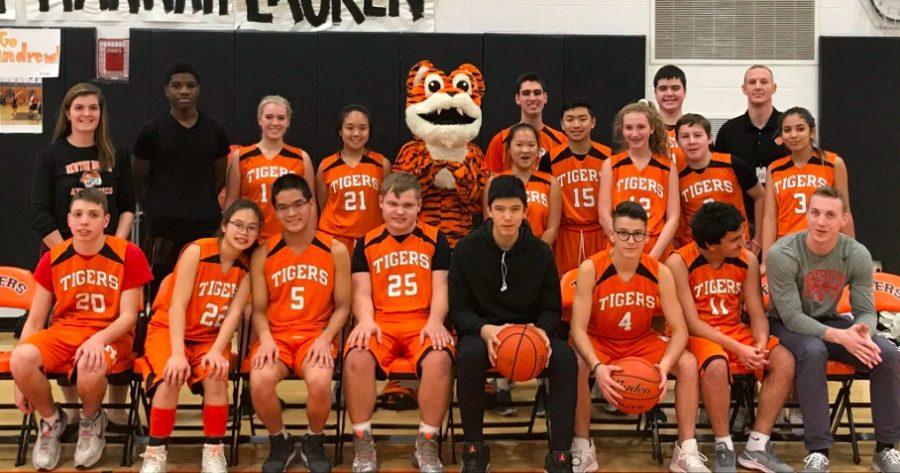 Unified Basketball, 1-4, beat Weymouth 41-40 in their final home game of their inaugural season on a buzzer beater last Thursday.
The Special Olympics affiliated team is all-inclusive and coeducational,  which means that male and female students with and without disabilities can play according to math teacher and head coach Keith Whelan.
Whelan said that the team was created as a result of  “a movement to develop more inclusive athletic programs for a variety of students at the high school level.” He added that athletic director Tom Giusti and the administration took inspiration from South’s Unified Track team last year.
Senior Tom DiSculio scored the game-winning basket with three seconds left on the clock to lift the Tigers over Weymouth. Whelan named DiSculio, who is the team’s leading scorer so far, a key player.
Whelan had high praises after his team’s first win.
“It was one of the most memorable sports experiences I’ve had in my life. The crowd was awesome. Just the team collaboration and unity was awesome,” he said.
According to Whelan, the team had some roadblocks at the beginning of the season due to “low interest.”
“In general from the start of the season, a lot of people didn’t understand what the team was about, or how it worked, so we didn’t have a lot of players,” the coach said.
People began to take notice of the team after the team took on South at home, according to Whelan.
“I think word spread through students talking with each other. We got a lot more interest, and like six or seven more people joined the team,” he added.
Whelan said that the team has had an enjoyable season.
“We’ve had a great season, and it’s been a ton of fun for all of us,” he said.