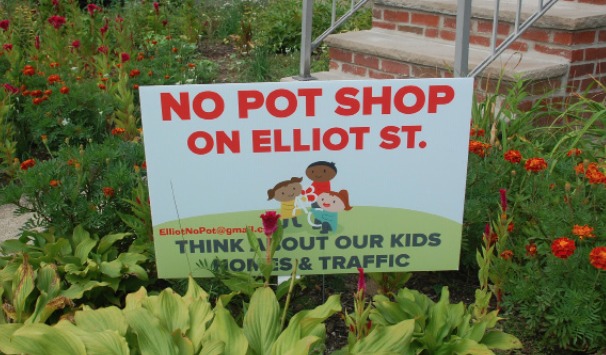 Citizens will decide the future of recreational marijuana sales in Newton on the Nov. 6 ballot. The city council decided on an uncommon resolution of two contradicting ballot questions on the same issue, in spite of possible voter confusion. One question proposes to “opt-out” of marijuana sales completely, while the other limits the number of stores to between two and four.
In the 2016 November election, 55 percent of Massachusetts voters voted to legalize recreational marijuana, and part of the ballot question stated that cities and towns had the option to limit or ban recreational marijuana retail in their community.
The organization Opt-Out Newton, formed in April by a group of Newton residents, proposed the opt-out question to the city council in June, according to city council president Marc Laredo. City counselors Susan Albright and Joshua Krintzman proposed the 2-4 question at the same meeting.
The city council originally voted to put the 2-4 proposal on the ballot, and against the opt-out question. However, Opt-Out appealed the decision by collecting 6,000 signatures to force the city council to reconsider in a Sept. 13 meeting, according to Opt-Out co-founder Karen Sherman. The counselors discussed the questions and then voted, deciding to keep the 2-4 and add the opt-out question.
Sherman spoke on the reasoning behind the opt-out question. “We’re not supportive of the commercialization aspect of it. We’re okay with people who want to use, whatever they want to do in their own home, but to have access right here in Newton, we don’t want to support that or the industry.”
Although he suggested the 2-4 question, Krintzman explained that he understood Opt-Out’s motivations in wanting the questions on the ballot this year. “I personally understand the urgency of their request. They want to prohibit sales before any stores open. The law passed two years ago, so there is a sense of urgency in this request. Although it is contradictory to the will of people in the 2016 election, I have sympathy towards the group and don’t mind placing a question about the recreational marijuana retail ban.”
Supporters for the 2-4 question explain that the question is meant to regulate the emergence of the shops, without ignoring the will of the people in the 2016 elections. Krintzman said, “The question was designed to give more municipal control over the beginning of the industry. We can have a fewer number of stores so we can see what this market looks like.”
According to the original ballot question, Newton was set to have a minimum of eight stores. According to Opt-Out co-founder Karen Sherman, many Newton residents were not aware that the ballot question entailed eight stores. “A lot of people weren’t really in the know, and would like to find out more.”
City counselor Andreae Downs explained that 2-4 emerged as a way to limit the number of stores in Newton, rather than banning them altogether. “We realized it would be hard to find a good location for eight retail establishments and so two to four was a little easier to locate.”
Because the two questions directly conflict, the one with the most votes will be the controlling guidance for the City Council if both pass, according to Laredo. However, even if either of the questions passes, the zoning ordinance will not necessarily be enacted. The City Council will have permission to institute the law but is not obligated to, according to Laredo.
The issue of having two conflicting questions on the same ballot created some dispute. Counselors and interest groups expressed concerns that having two questions about the same issue could confuse voters and alter results. “To have competing questions on the ballot makes it very difficult to know which one to choose. They could all cancel each other out because each question needs at least fifty percent of the vote to pass,” said Sherman.
Many counselors said that they worried that having two questions on the ballot might skew results unfairly to the milder 2-4 position. People may prefer opt-out, but vote in favor of the 2-4 question in case the opt-out question fails, which would ultimately add more votes to the 2-4 question.
Laredo also spoke about the possible confusion of having multiple conflicting questions on the ballot. “My concern is, I always look to what is the simplest thing for a voter, when he or she goes into the voting booth. I would like a ballot question that is as clear and straightforward as possible, and I, personally, am in favor of putting a single ballot question before the voters.”
In a council meeting on Sept. 5, Mayor Ruthanne Fuller added a question that would limit the number of recreational marijuana stores to between two and eight, however, the city council voted against this idea.
Although the City Council decided to put the questions on the November ballot, Fuller has the ability to veto the provisions. It would take a vote of 16 counselors to override the mayor’s veto.
Leading up to the elections, voters will decide what is better for Newton and navigate how they should vote to enable this future. Sherman said that she is excited to teach people about the issue and campaign for the opt-out question. “We’re looking forward to start campaigning and spreading the word about the vote. It’s going to be a very fast campaign. We are looking forward to the debates and making sure that we’re doing everything we can to make people vote.”