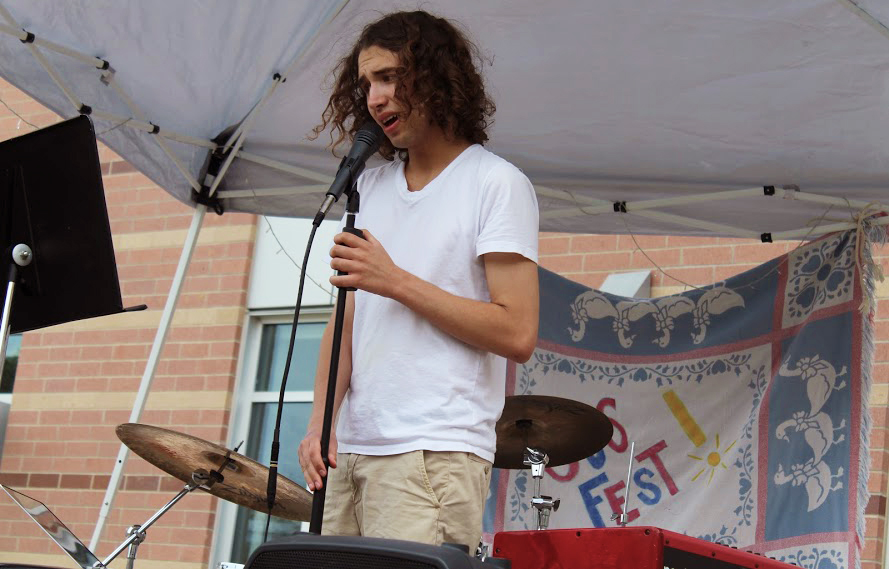 Developing song ideas, scribbling lyrics on paper, crossing out phrases, and experiencing moments of frustration: this was the process endured by senior Ian Reid and junior Kaylee Federman in making their albums released earlier this year.
Reid’s album, entitled SEASONS + years, features 17 tracks that explore his journey through adolescence, while Federmann’s album, entitled By Your Side, includes four tracks centered around themes of independence and confidence.
Though neither artist had been taught how to professionally create an album, they wrote, recorded, and put together songs. The end result was something tangible to express their emotions and dreams, all able to share with their family, friends, and classmates.

Deciding to create an album
Reid began the album-making process uniquely, posting on Facebook in January 2017 “mixtape drops 12/28” as a joke, he said. “I had written some music, but I didn’t have any actual plans,” he explained.
As time passed, however, he started thinking about actually producing and releasing an album. On February 28, he decided to finally do so. “At first I wrote songs just to write them,” he noted. “As I went on, I realized I could tell a narrative through my album. I could tell my listeners about seasons, changing, and being a teen.”
Federmann explained that her passion for singing and playing the guitar inspired her to begin writing songs and, in turn, create an album. Such singers as John Mayer, Ed Sheeran, Julia Michaels, Hailee Steinfeld, and Taylor Swift proved to be especially large sources of inspiration, she added.
Inspiration / Emotions
Making an album, like many creative endeavors, demanded both focus, patience, and, for Reid, “intense vulnerability” from the artists. “There’s power in vulnerability, but that was a scary thing to do. To realize I’m putting myself on blast. There was fear in releasing the music.”
Reid explained that developing lyrics and melodies, however, still proved to be a unique vehicle through which he could explore and express his feelings. “When I decided to take it seriously, I had this idea that I’m going to write what I’m feeling in this moment,” he said. “I think a lot of my strongest songs are just when I had an idea, and I didn’t know where I was going to go.”
Emotions similarly guided Federmann during her writing process. “Usually, I start with some kind of theme or idea, then I go to what the feel is.” With more ‘mellow’ ideas, for instance, Federmann will use more minor chords in her songs, whereas with happier themes she will use major chords. She added that playing instruments helps convey her emotions, which is why she plays these chords.
Reviews and descriptions of specific songs
The artists’ unique musical styles ultimately manifested themselves in the sound and organization of their albums’ songs.
SEASONS + years follows Reid’s journey chronologically, beginning with the upbeat song “years,” featuring Reid’s vocals and piano.At the end of the song, he sings, “Will people yell lines and the rhymes that I write as taunts as I walk in the hall?” He goes on to sing, “That also assumes that anyone’s actually listening at all.”
Like Reid’s first track, Federmann’s first song “By Your Side” features a wide variety of vocals. This holds true throughout her album, as all four songs pack a energetic punch. Her voice starts off soft but grows stronger as the song progresses. Federmann starts the track singing, “Sometimes I feel like it’s the words unspoken, and they just tear us apart.”
Federmann added that she relates most to “Sweatshirt,” the album’s third song, “because I think it gives a message of turning something negative into something positive and showing independence in something that can be very hurtful,” she explained. The drums, guitar, and her tone match the upbeat mood of the song and transformation of negative feeling into positive ones.
The last song on Reid’s album, “Seasons,” similarly proved especially meaningful to him. The track weaves together pieces of previous songs that play over each other to summarize the album as a whole, he said.
Reid also noted that in the song he considers the meaning of life, repeating the line “I don’t know what this life’s about, but for just one night I’m okay with a half-truth.” The song, Reid said, ultimately ends the album effectively and “takes everything I’ve been feeling and brings it together.”
Production
In order to realize these inspirations and lyrics, Reid and Federmann produced their albums with a mix of mentorship from others and independent efforts.
Reid self-produced his album, although others provided support throughout the process. His friends who are also involved in music provided their expertise, he added. Many recorded with him, some singing on his tracks and others providing musical accompaniment. “I’m lucky to have very talented friends who play instruments that I don’t,” he said.
A Sony Records sound engineer and songwriter, Morgan Dorr, and a local music producer, Peter Hackel, helped her to produce her album, according to Federmann. Over the span of five days, she worked with experienced musicians and producers and recorded her songs at a studio in Watertown. “It was very exciting to be around so much success in the room and so much knowledge,” she said.
The process of developing these recordings was particularly time-consuming for both artists. “Editing is always hard no matter what you’re doing, and it was the same for the album,” said Reid.
Federmann also noted that “the music industry is not on your schedule. You have to wait your turn.” Although waiting for her album to be released was a challenge, she said, it was a temporary one. “The outcome was absolutely worth the wait.”
Both artists explained that music is a highly personal and reliable experience to them, furthered during this album-making journey. “Music is the one thing I can turn to that’s always been there,” said Federmann. Reid shared a similar sentiment, saying “It’s not perfect, but it’s mine.”