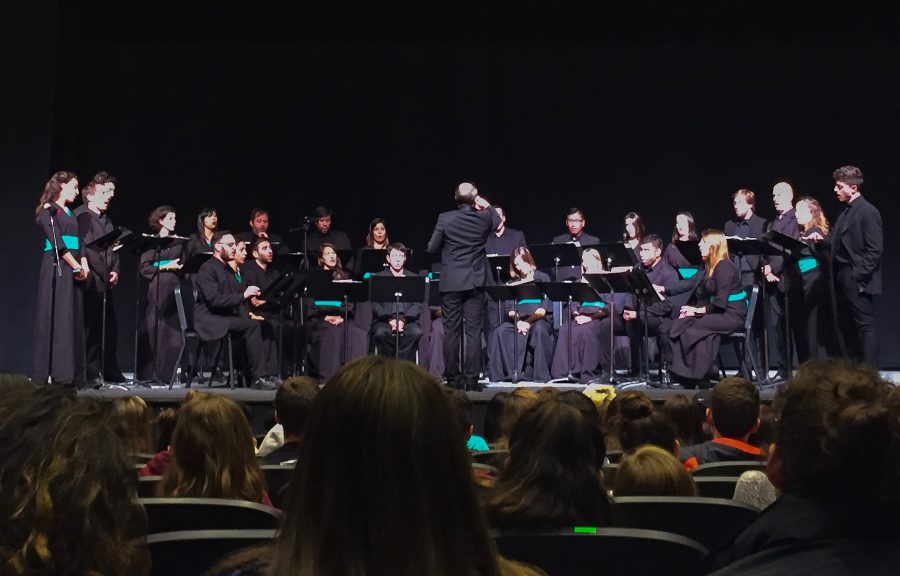 From La Plata, Argentina, the choir Vocal de Cámara Platense, directed by Fernando Tomé, performed in the auditorium during E and F-block on Wednesday, March 28.
As the group was planning to visit Hartford and the Northeast for 15 days, Spanish teacher Cristina Schulze arranged a performance at North.
“My friend, the conductor, contacted me and told me that he was coming to the United States and they were gathering funds and they were going to be close by because they were invited by the organist from Hartford,” Schulze said. “He told me that they were coming and we started exploring the options of having a few concerts here.”
Many other teachers were involved in setting up the concert including the custodians, the world language department, and the graphics department, according to Schulze.
“I invited the choir and they gave me the date they were coming and I coordinated the food, the lunch for them, while the music department provided us with a frame, meaning a space, and they also helped with setting up microphones and chairs and setting up the auditorium for us in general,” Schulze said.
The 30 musicians were assembled in 1999 and have been practicing as a group since then, each contributing a pitch ranging from altos, tenors, baritones, and sopranos.
“We want to get the extremes pitches from all over Argentina,” said Tomé. “I see students who have special skills and it is very particular who was able to join.”
Tomé chose songs that show the capabilities of each choir member. “Arroz con leche,” composed by Carlos Guastavino, was the choir’s second song and highlighted the different pitches of each member.
The choir ran out of time and was only able to perform six of the 14 songs they had planned for the 300 people that attended the second concert, according to Schulze.
To end their performance, the choir sang “Gato” where some singers and the director danced the tango in pairs.
“It was a very good audience,” said choir member Alejandra De Olano. “It turned out to be a very nice concert.”