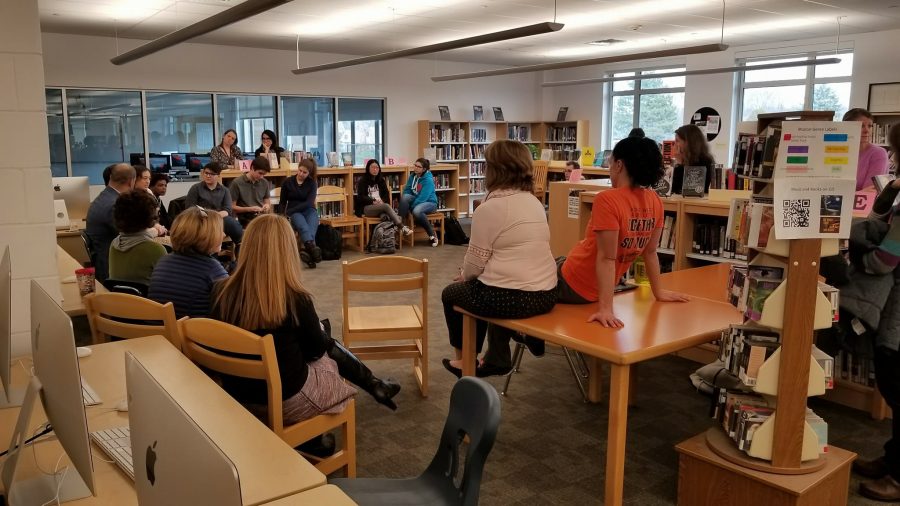 School administrators suggested at a meeting regarding gun safety at this school that they will take several steps to improve security on campus, including locking some main entrances during the school day.
North students, faculty, and staff gathered in the library on Thursday, March 1 during X-block to discuss the Parkland shooting and gun safety on campus. Along with vice principal Amy Winston, Turner answered questions and concerns from students and teachers.
“The idea behind the meeting is to have a free-flowing conversation that really offers time for anyone to speak about how they’re feeling, to ask me questions, and to share some opinions on Newton North,” said principal Henry Turner.
Winston explained that the administration is brainstorming measures to keep the school safe, such as locking some previously unlocked doors.
Turner added that the school continues to believe in an open campus and “wants to preserve the culture of student independence.”
He added that “levels of security in schools will ultimately be beyond any policy decision that I or Ms. Winston can make, that really depend on bigger cultural issues at play here.”
Students voiced concern over the administration’s response to the Parkland shooting, with a particular focus on the lack of immediate discussion and a moment of silence for the victims.
“I think there is this growing culture not only in Newton, but nationally, to not have open conversations,” said senior Wendy Li. “I think having a moment of silence earlier on might have been helpful.”
Turner replied that “there are things we could have done better and I’ll own that we moved slowly here. But there have been a lot of shootings in 2018 and we hear bad news pretty much every single day, and I don’t think I’m going to be able to do moments of silence for every single tragedy.”
Turner also noted that he does not support the idea of teachers having guns on campus.
Many attendees spoke about their discomfort during the Feb. 16 fire alarm at North. The building evacuation occurred just two days after the Parkland shooting, where the gunman set off the fire alarm to draw students from their classrooms.
One student said, “I was personally terrified, it was scary and hard to go through. It went through a lot of kids’ heads. My own teacher didn’t know what to do.”
Winston said the administration is considering sending mass texts to the school community instead of emails to improve communication during such situations. Turner added that the school was thinking about making loudspeaker announcements during future fire drills to broadcast the cause of the alarm.
Another point of discussion was how the administration plans to handle the upcoming student walkout to protest gun laws on March 14. Turner said the school was supportive of students who want to be activists and that he “is hoping we are able to support a safe and inclusive event where students are not going to be penalized in terms of missing class and where teachers are supported.”
Faculty and staff were also vocal during the discussion. Spanish teacher Cristina Schulze asked how teachers can ensure that their students are safe and supported during the walkout, and “if teachers will be able to accompany their students.” Turner answered that “we’re going to support all teachers who want to be part of the event, and we will have a plan and location on campus for students who aren’t interested in doing the walkout.”
Mental health issues also came up repeatedly during the emotionally intense meeting. Senior Sam Kesselman said, “I think something more pre-emptive, like dealing with mental health at Newton North would be more effective. I know the person who’s in charge of your mental health at NNHS is also the person who writes your college recommendations and many students see that as an inherent contradiction in the system where kids don’t have someone to talk to.”
Turner said “Having educators being able to lock the school down isn’t necessarily going to make the school safer, but having good relationships and knowing your kids– that will make the school safer. I really feel good that we know you all and that you all love coming to North every day. That’s something we need to celebrate.”