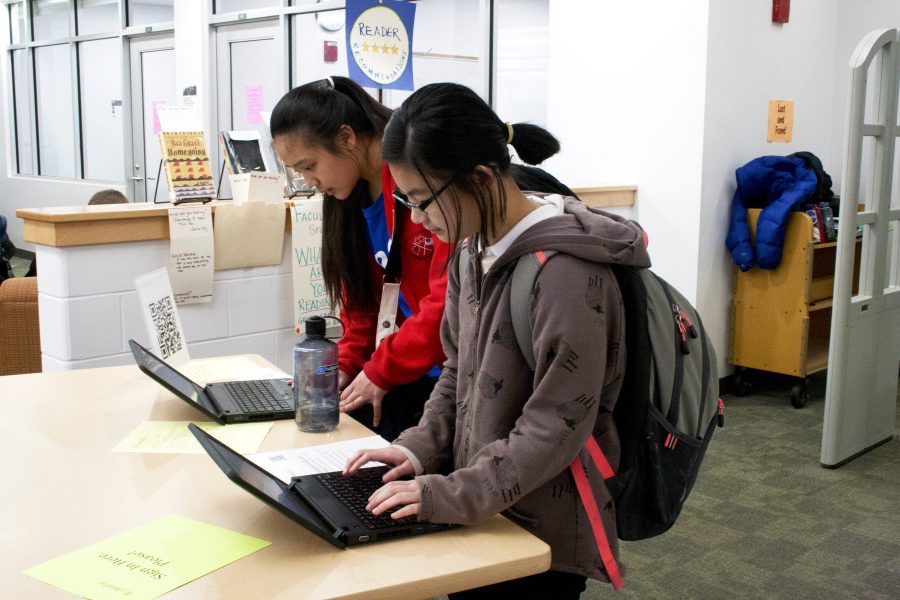 Freshmen Jolie Liu and Nicole Ou sign-in to the library during a lunch block free.

The library has instituted a new LibraryTrac program, a system that requires students to scan into the library using their student IDs or lasid, as of Jan. 2, 2018.
The system was put into place in order to track the number of students coming and going in the library during every block, according to vice principal Amy Winston.
“We plan to use this data to advocate for restored staffing levels and think about resources and structures that best support students in the library,” said Winston.
The current plan is only a pilot run and will be enforced sporadically while it is tested out, according to librarian Erin Dalbec.
“We may institute it fully later on, depending on how the pilot goes,” Dalbec added.
According to Winston, the rise in students coming to the library each day is what prompted the program’s implementation.
“We are seeing an increase of almost 300 students using the library each day compared to last year,” said Winston. “And we expect that to keep increasing when sophomores are given open campus privileges during the spring semester.”
The program is also being used to look for areas of improvement in the library space. “If a large number of students are coming to the library to use computers, are we sure we have enough computers?” Winston added.
Despite this, some students are not happy with the new system. “I don’t think we should be stopped on the way in. It just slows people down,” said junior Gabriel Appelbaum.
The results of the pilot will be evaluated upon its conclusion and then the administration will decide whether to continue with the program, according to Winston.