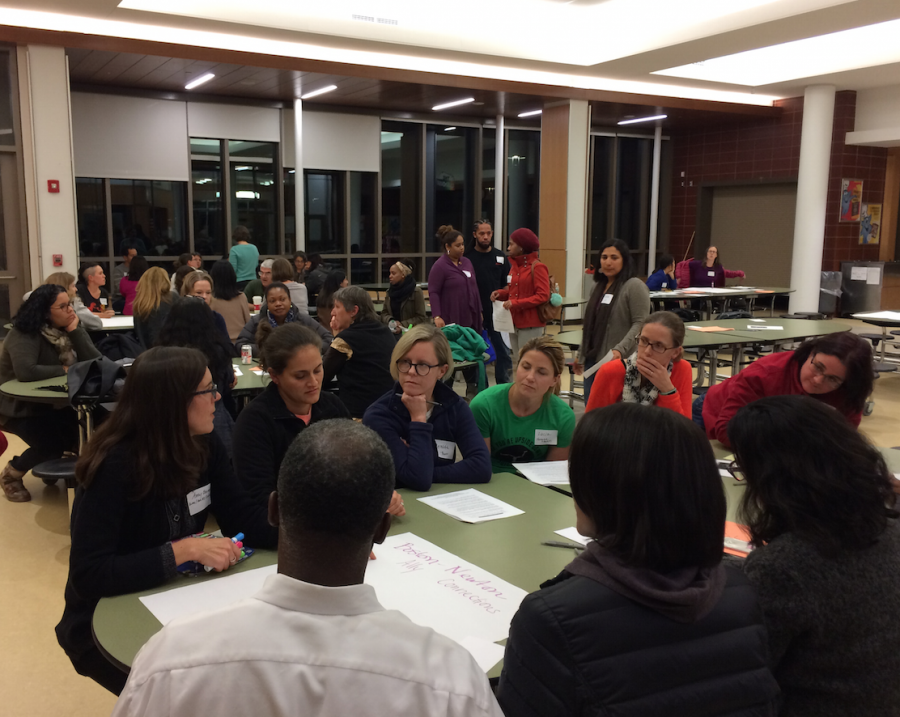 More than 50 parents from various Newton Public Schools gathered at Angier Elementary School last Thursday night to discuss race, culture, and identity issues affecting students. The meeting was the second in a series of meetings known as Families Organizing for Racial Justice and Awareness of Race, Culture, and Identity (FORJ/RCI).
The event was organized by six Newton parents who were looking to “engage parents in this important discussion of race,” according to Vineeta Vijayaraghavan, one of the organizers. The meeting was focused on finding new ways to educate the community on these controversial issues and was open to all Newton parents.
“With the way society is today, and me having young boys who are black, I just figured I’d be part of something important to me,” said North parent Mona Lisa Neville.
Unlike the first meeting, which was open only to elementary school parents, this meeting also welcomed middle and high school parents.
Amy Behrens, the lead organizer of the event, said, “My goal for tonight was having individual schools connect with each other and to have some cross-fertilization because I think that some schools are more advanced in talking about race than others.”
The meeting began with parents from the same schools sitting together and discussing what kinds of changes they would like to facilitate in their schools and in what areas they would like to educate themselves in order to be able to make these changes possible.
Next, parents split into different groups to meet with parents from other schools based on what activities they were interested in facilitating, including field trips, connections with ELL, and faculty or staff involvement. Parents discussed how these activities meet the specific needs of their school, and what steps they will need to take in order to set up these activities.
Finally, parents were able to return to their original groups, discuss what they had learned with other parents from their school, and make an action plan.
“Racism is deeply ingrained into this system and into our country,” said South parent Jessica Basile. “So how do we use the privilege that we have to make a difference?”
According to organizer Tamika Olszewski, this meeting was just one step towards making a difference. “Our goal is to empower, not discourage,” she said. “We are taking an important step, and a powerful one, to right the injustice that is racial discrimination.
The organizers have received two grants and the support of superintendent David Fleishman, but most of the work, according to Behren, is volunteer-based.
“At the end of the night, I think everyone walked away having connected with other people,” said Behren. “I think that alone is important, but I also think that some people walked away with real concrete steps they want to take.”