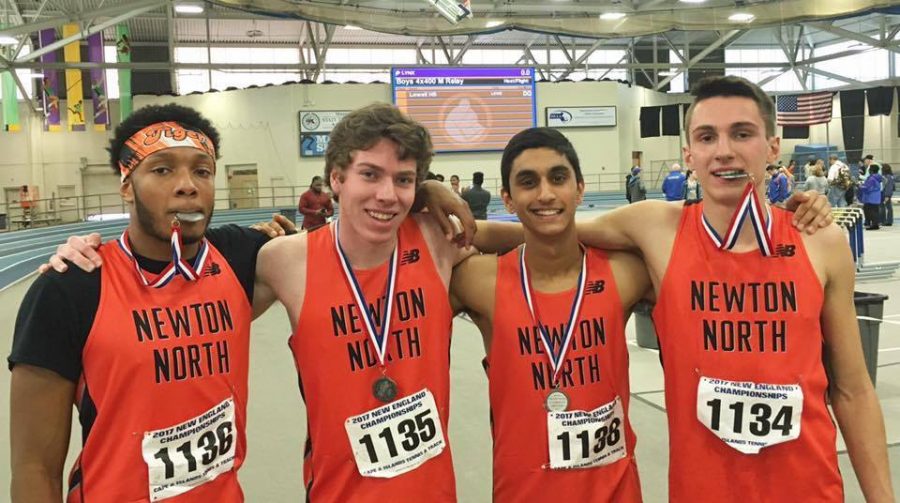 By Jonathan Cohen
Athletes from both boys’ and girls’ indoor track teams finished in the top 10 in the New England Championship Meet last Saturday.
Junior Andrew Mah, a captain for the boys’ team with seniors Jordan Greene, and Ryan Steele,  ran a personal best at the meet in the 2 mile. He finished third, six hundredths of a second behind the second place finisher and 1.43 seconds behind the first place finisher, with a time of 9:13.61.
Another highlight of the meet came during the boys’ 4×400, run by Greene, junior Devin Coughlin, sophomore Theo Burba, and freshman Ragav Kadambi. The team came in second by six thousandths of a second, setting a new school record with a time of 3:22.82.
Senior Nathaniel Klein also finished fifteenth in the shot put.
The meet “went well for our team,” said Amanda Whitham, a captain of the girls’ team, with seniors Kayla Hreczuck, and Sydney Hurwitz.
The girls also had two events in which athletes from North placed in the top ten. Junior Natalie Marshall finished seventh in the long jump. The 4×800 team, run by juniors Cat Degroot, Einat Gavish, Natalie Solari, and freshman Helena Teixeira Dasilva, beat their best time by three seconds, putting them in seventh place with a time of 9:40.79.
Both boys’ and girls’ indoor track enjoyed successful seasons, with the boys’ team taking first in the state for a second year in a row, and the girls’ team taking fourth, despite missing several key members on exchange trips or with injuries, according to Whitham.
Reflecting on the season, Steele said, “It’s hard to be disappointed with your 19th undefeated season in a row, and a second consecutive state championship.”