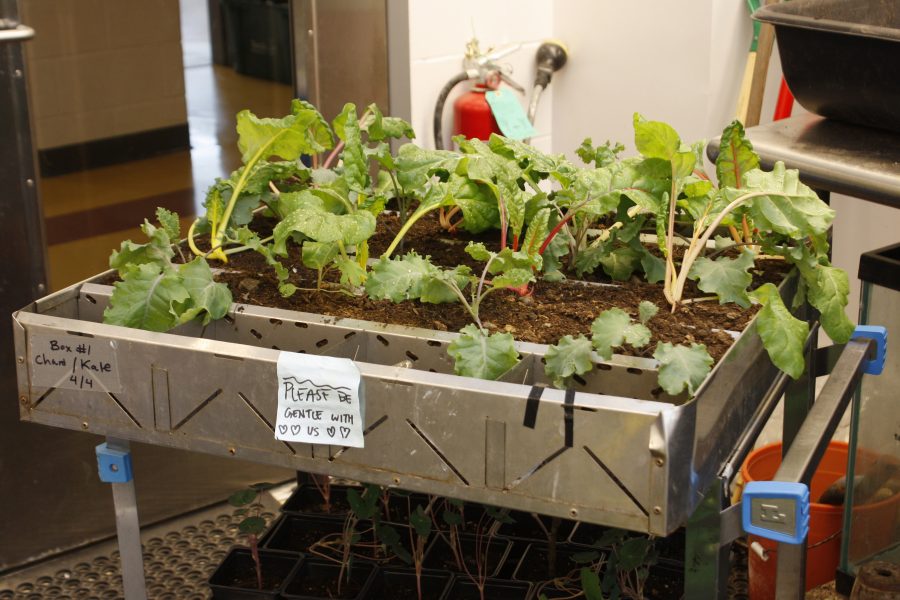 Juniors Colin Kadis and Gregory Brumberg participate in the Hanging Garden Club, which manages a greenwall in North’s greenhouse on the fourth floor. Both are passionate about agriculture and preserving the environment; they hope to pursue that passion in the future.

Q: Why and when did you first join the Hanging Garden Club?
Kadis: I joined the Hanging Garden Club because I’ve always been really interested in agriculture. There was a student a few years ago who actually decided to make the garden as her senior CAPS project, and then she left that year. The garden was kind of in a limbo, so the Greengineering department got it together and made everything work.
Brumberg: My sister was actually the student who did it for her senior Capstone project. She was inspired by what she had learned in Greengineering 101, so she decided to make a vertical garden.

Q: What first sparked your interest in agriculture?
Kadis: I was always really interested in animals, and I always wanted to do something with them, though I didn’t know what specifically. All of agriculture is related, in a way, because animals need to eat plants or need to eat animals that eat plants. Although we don’t have animals here at Newton North, it’s nice to learn about them and their role in agriculture when we go on field trips.
Brumberg: I really care about the environment, and I had the realization that agriculture has the greatest influence on it. Everyone needs to eat, so we need to figure out a sustainable way to feed everybody but also not destroy the planet.

Q: What does the Hanging Garden Club involve? What specifically do you do there?
Kadis: We manage the vertical garden in the greenhouse, so we have plants to grow that we then put on the wall and maintain. If everything goes well, we harvest them. But we also do some field trips, and we’re hoping to have some speakers or maybe even host a movie night to help kids learn about agriculture.
Brumberg: Additionally, over the summer, the greenwall is watered by the group. But most of the work is in the spring, when we start the seeding.

Q: What goes into growing all of the plants in the garden? How and when do you work there?
Kadis: We work there very sporadically. We work on it Monday X-blocks, then we try to do as little work as possible over the summer, but sometimes it can get pretty crazy. We also try to break up jobs a bit; for example, we have some people who are in charge of watering the plants on each day of the week. So someone might water the plants on Monday, and another person might do Thursday. We also have people in charge of selling the produce and finding people who will eat it. Some people also make sure that there are enough members of the club that can come in and help with what needs to be done, while others are in charge of working on the wall during the summer, when everyone else is away.

Q: What plants do you grow in the garden? How do you choose what plants to grow?
Kadis: We’re growing a special kind of lettuce called Cherokee lettuce, which is supposed to be very heat-tolerant, so we’re hoping that its tolerance will help with our temperature issues. We’re also going to grow some Swiss chard and kale, which are also two very hardy plants that should be able to survive during the summer. We have some onions, and we’re going to grow carrots and beets. We buy all of our seeds from a company called Johnny’s, which is located in Maine, so the seeds that do well there are the seeds that do well here. The company will tell us if some varieties are more heat-tolerant, if they need water, or if they like sun, which is helpful. We take that information into account, and we use it so we can choose plants that fit the wall best.

Q: How have you benefited from your involvement in the Hanging Garden Club?
Brumberg: The Hanging Garden Club introduced me to the NOFA conference, which is run by the Northeast Organic Farming Association. I learned about the scientific side of agriculture, which was more interesting to me because that’s what I really care about. Some people there were so impressed by my questions that they offered me a job on their farm.
Kadis: And it’s really nice to meet other people with similar interests. In Newton, we have a lot of things, but unfortunately, we don’t have many farms. So it was great to work with other people interested in agriculture at the conference and to learn more about farming.

Q: Who went to the NOFA conference, and what activities did you take part in there?
Kadis: We opened it up to all Hanging Garden Club members, and people who were interested attended the conference. We carpooled there, and we had the option to choose between three different lectures. The lectures varied from learning how to raise your own turkeys to learning how to build your own greenhouse. Some of our members went to the latter; I actually went to one about dairy farming. We also had an organic lunch that was a real seller. During lunch, we tried to come together and tell everyone about what we had learned. It helped everyone really get a better sense of their own spot in agriculture, which I think is really important for such a diverse subject.

Q: Who have been helpful mentors to you?
Kadis: We have two teachers, Dr. Gibson and Mr. Peloquin, who I would say are both official advisors, but they’re also huge helpers and supporters of the club. They were really helpful in learning about what the plants need and also learning about the wall.

Q: What challenges have you come across?
Brumberg: I would say one of them is definitely bureaucracy. The issue here is that we had an automatic irrigation system, which was hooked up to a hose outside. It now doesn’t work and would need a very specific washer in order to work properly. If you want to add a washer to the school, you need a building permit. So we weren’t able to have our automatic irrigation system anymore.
Kadis: We do have problems with our irrigation. The wall was originally built around a faucet in the building. The wall ran off the faucet on a timer, so we wouldn’t need anyone to manually water it. The problem is that that faucet is now leaking, so we can’t put that faucet on the timer because it would waste too much water. We also have problems trying to get the plants to grow on the wall. It’s a really cool idea, but the greenhouse also in a really hot place, and plants can only take up so much heat — they like a really specific temperature. It’s kind of a tough situation at times because of that. There are also a few problems with trying to appeal to people across all the grades; right now, we’re very junior-heavy.

Q: What are your goals for the club in the future and in general? What do you hope to accomplish?
Kadis: We’d like to work better with all of the other agriculture groups and agriculture students, and we’d like to have more guest speakers visit and talk to everyone. Getting the wall to its full production and getting all of the produce we harvest from it more involved in the school — maybe even selling to the Tiger’s Loft — would be a dream.
Brumberg: We’d also like to expand our club to other forms of gardening. Perhaps a hydroponic setup in the greenhouse or a conventional horizontal garden, much like the other agriculture clubs.

Q: What other agriculture groups in the community do you hope to work with?
Kadis: There’s a good mix. At Newton North, there’s an independent study and another group called G Force that does a lot of work in the greenhouse. In Newton, there’s Green Newton and the Newton Community Garden. South also has an agriculture group. We’d like to have them come in and lecture us, and a few of us has seen what they’re doing at South to get inspiration for North’s garden.

Q: Will you pursue your interest in agriculture and the environment in post-secondary plans?
Kadis: Yes, certainly for me. My dream is to be a dairy farmer, so learning right now about plants and agriculture in general is very helpful. I’d love to be a dairy farmer somewhere in the Northeast, but it’s really hard to do because cows like a lot of space, and there’s not that much of it in Newton. A lot of the state schools have good dairy programs as well.
Brumberg: I’m visiting agriculture schools for college, so I think so. I take it more from a scientific approach, like plant genetics and making fungicides and pesticides.