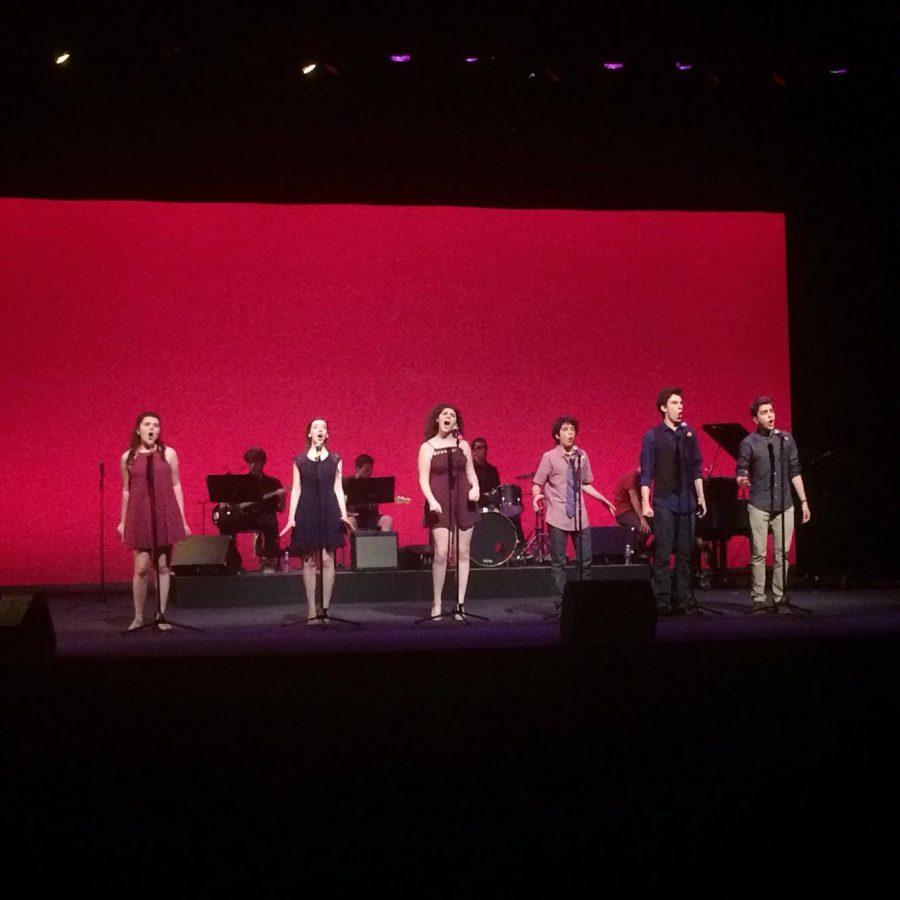 by Rose Bostwick
Silhouetted against a single-tone backdrop, actors perform contemporary songs about the meaning of home in this year’s Cabaret Troupe performance, “Home.” Directed by senior Elise Hausman and junior Zoe Jasper, the show went up Saturday and Sunday at 7:30 p.m. in the auditorium.
While Cabaret Troupe is not a play in the traditional sense, as senior Erique Green, a cast member, described, it “still tells a beautiful story, which in this case is the story of a group of young adults struggling through different life situations, while their differences are more similar than they think.”
Following a full-cast opening number came the piece “I Like,” a duet between sophomores Martha Bennett and Evyatar Gershon. In this adorable piece, Benett and Gershon charmingly portray two young children who describe themselves and the things they like while confessing their feelings for one another. A joy to watch, the song has a catchy tune and perfectly encapsulates the awkwardness of young love.
Later came the song, “Two Little Lines,” by Drew Gasparini, performed by junior Liana Glennon. Sung from the perspective of a teenage girl nervously awaiting the results of her pregnancy test, the song highlighted Glennon’s beautiful voice and the anxiety of the feeling that your life could change significantly.
One highlight of the performance is the touching duet “Great, Cool” from Young Kind of Love, performed by Green and senior Ethan Smith. The song is sung from the perspective of a former couple who acknowledge each other’s accomplishments while saying how much they miss each other. Both Green and Smith did a great job in the part of their characters, and the song told a story with a touching message of moving on after a painful experience.
The first act came to a close with the song “One of These Nights” from Fugitive Songs. Complete with a beautiful melody and intricately overlapping harmonies, this song is a memorable stand-out of the night. The piece displays the talent of every cast member while echoing the show’s theme with its closing lyrics, “I’m leaving home. I’m coming home. I’m finding home. I’m almost home.”

According to Glennon, the theme of “home” has a different meaning to every individual. “Each of the songs addresses a different feeling of what home is to the character,” she said. “Home can be an actual home or it can be another person.”
While preparing for Cabaret Troupe, actors stressed the importance of bringing out the personalities of their individual characters through song. “There is a huge emphasis on embodying our characters because these characters, although exaggerated, are normal people with very relatable issues,” Green said. “I’ve loved my entire experience in the cast and hope everyone see how awesome the show is going to be.”
“The cast is special because we’re all such great friends and it’s such a small cast that bonds can be made with everyone,” Glennon said. “Everyone is so talented and dedicated to the show, and it’s been a really wonderful process.”