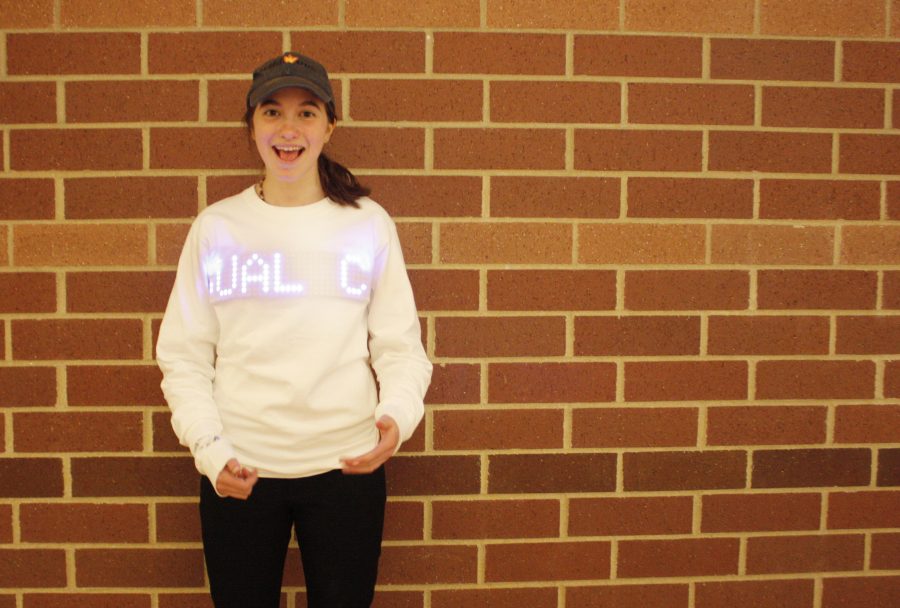 Sophomore Sophia Wilcox-Warren demonstrates a light-up shirt.
by Rose Bostwick
Major 3 students in Design and Visual Communications are developing a project in order to “bridge the gap between technology and fashion,” according to design teacher Sue Brooks.
The project consists of clothing that incorporates technological aspects, such as illuminated shirts and a hoodie designed to relieve stress.
According to senior Bradley Trepanier, a Design Major 3, the stress-relief hoodie, which has yet to be fully developed, has “sensors along the sleeve and around the hood that detect heart-rate and temperature, and speakers inside of the hood to create a calming ambience for the wearer.” The illuminated shirts are long-sleeved and white, some with a rectangular screen displaying messages in flashing colored LED lights and some with colored LED lights down each sleeve. The shirts with messages can be programmed to say one of three phrases—“NNHS,” “Go Drakos,” and “It’s lit”—with the push of a button.
The planning phase of the project began last year with a discussion of the difference between innovation and invention, according to Trepanier. “An invention is something that’s never been done before, and an innovation is an improvement of something that’s already been done before,” said Trepanier.
In order to come up with ideas for the project, the group made “a giant list of problems we wanted to solve,” Trepanier said. “We picked out the key problems that related to us the most, then we started thinking of possible solutions.”
After presenting three main ideas to an advisory committee, the Major 3 students decided on a project combining technology and fashion because it “seemed to impress many of the advisors and to present a lot of potential as a project,” according to Trepanier.
Following this decision, the students eventually finalized the project down to illuminated shirts and a stress-relief hoodie, and split the Major 3 class into two groups to work on each project. Currently, there are five total illuminated shirts, while the stress-relief hoodie is still in the engineering phase.
There are many challenges in engineering the shirts, according to local entrepreneur David Reyes, who is mentoring design classes to help develop the project. Reyes explained that the first challenge of engineering an illuminated shirt is machine washability, “Putting electronics on something that has to be machine-washable is a challenge, and we don’t have an answer to that yet,” said Reyes. “The second challenge is: will it be something that you want to wear? It has to be fashionable. Because it will be the first of its kind, it will probably be clunky and not very elegant: but it still has to be fashionable.”
It is important for the shirts to have aesthetic appeal because they must “generate enough revenue and interest that second versions can be made,” explained Reyes.
The target audience for the illuminated shirts is sports fans, and the shirts are to be worn for the purpose of “home-team specific signs in a stadium,” according to Reyes. “We hope eventually to talk to the Celtics, the Patriots, and the Bruins, to see if we can bring in a shirt with a team-specific lighted display capability to it to enhance the stadium experience,” he said.
Design students first tested the illuminated shirts at the Play For Drakos basketball fundraiser on March 12 and received many positive reactions from students and staff, according to Trepanier. While the shirts are originally intended to appeal to the North community, the outreach will hopefully extend to a wider public.
Selling the shirts is an innovative idea because, while the idea of merging fashion and technology has been established in professional shows, it has not yet been marketed to a wider consumer base.
“Fashion technology has been a runway thing that people are experimenting with, but it’s never been introduced into the market for a target audience,” Trepanier explained. “A lot of people are doing it at home for costumes and events, but we have a target audience and a market. These are intended to be sold at some point.”
In the future, the goals for the project involve trying to focus more on the design of the shirts, according to Brooks. “This year we’ve been trying to solve the technology problems, which has taken longer,” she said. “We haven’t even had a chance to deal with the design aspect of it.” Brooks also added that eventually the class hopes to introduce 3D printing as part of the project.
“Fashion and technology are very different worlds,” said Trepanier. “We’re trying to bring them together through this project.”