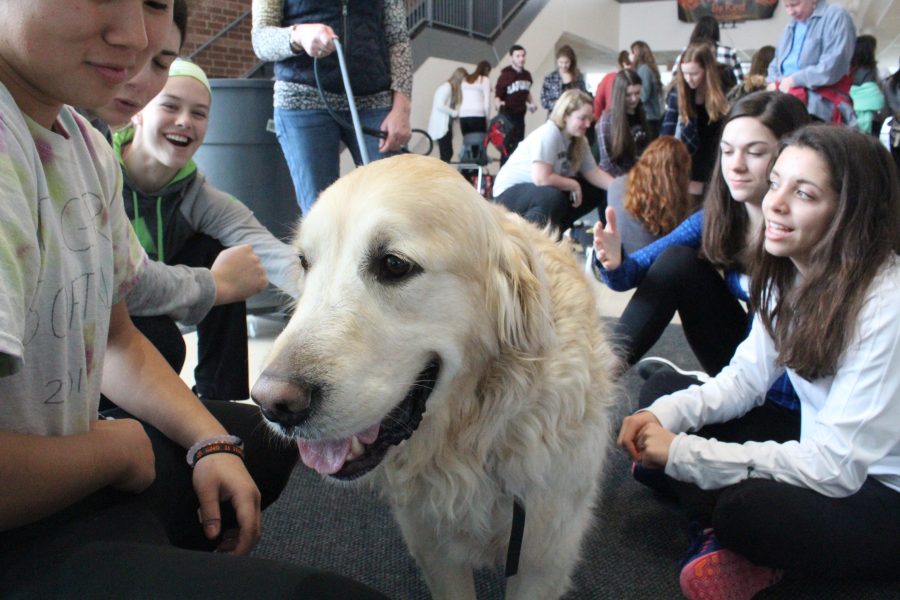 A-block
by Jackie Gong
Nataly Kogan, creator of the social media website Happiness, spoke in the cafeteria during A-block today as a Kindness Day presenter.
Kogan started her talk by introducing a “Seven-minute happier workout,” encouraging students to write down three things they were grateful for, perform an act of kindness, and take time to “be still and silent.”

The event became interactive when Kogan invited the audience to use their phones and email someone how much they appreciated them as an act of kindness.
Urging the audience not to expect an instant reward for being kind, Kogan also added, “Be kind—not for the other person, but because it feels good,” citing that “givers” who are kind are often found at the top of most professions. “They don’t think about getting something back right away,” she said.
Kogan also addressed the idea that kindness is a sign of weakness. “Being kind doesn’t make you a pushover; you build emotional equity,” she emphasized. “Think about kindness as an investment in you life that is more long-term.”
Explaining that while many people may be goal-oriented, Kogan explained that “happiness is not just a bonus we get at the end. If you cultivate and nourish a positive outlook, there won’t be an area of your life that won’t get better,” she said.

B-block
by Nour Chahboun
North’s television production team proudly presented their new music video entitled “Where’s The Love,” written, sung, and co-produced by senior Marchaina Roscoe. Guest speaker Sarah Livesey also spoke about kindness in her life during B-block, as part of Kindness Day in the auditorium.
The music video touched base on sexism and racism in North’s community. Students and faculty, including interim principal Mark Aronson, are featured lipsyncing in the powerful production.
Next, guest speaker Sarah Livesey spoke about her journey dealing with brain cancer. Livesey began her presentation by asking a student from the audience to come on stage to give her a hug. The student’s kind gesture was emotionally touching for all present.
Livesey viewed her challenge through a positive lens and used it as a “platform for growth and inspiration.”

“I spent 43 years thinking I had to be perfect to be lovable, but then I got brain cancer,” said Livesey. Since she was diagnosed with a malignant brain tumor, Livesey was shocked by the amount of kindness people were willing to give her.
“The cancer doesn’t define me, I’m not a victim, I don’t need pity, but support is always a great gift,” said Livesey.
According to Livesey, she had to “surrender to the flow of life” and “choose joy” to be happy.
Livesey also spoke about creating a painting to serve as a visual representation of all the love and kindness she has in her life. “It is a visual manifestation of all the love and support I actually have,” she said.
Throughout her journey, Livesey has remained positive and lives by the saying “I never lose, I win or I learn.”
https://www.youtube.com/watch?v=WtdCAqAbiP4

Social worker Deborah Horowitz spoke to students about the advantages of being kind during C-block April 8 in the auditorium.
Horowitz, who works for the Mass. Department of Mental Health, provided in-depth information on the scientific benefits of being kind and how both giving and receiving kindness is a “win-win situation for everyone.” For example, she explained a kind act’s potential to cause a chain reaction of positivity.
Following her presentation, Horowitz led an activity in which people on each side of the auditorium competed to give more compliments to each other than the other side. Competitors were rewarded with kindness-themed pins.
To conclude the block, students viewed a music video for “Where’s the Love?,”  a song written and recorded by student Marchaina Roscoe under the name Joi-Beatz. The song addresses issues regarding diversity and bigotry in the community. The video takes place inside of North and features many students and faculty members.
Also during C-block was an additional kindness-related presentation in the film lecture hall. Students who did not attend either presentation worked on a mosaic of a colorful pattern outside the cafeteria, while others still went on a kindness-themed scavenger hunt around the school.

G-block
By Blake Krantz
ArtLifting, a charitable company founded with the purpose of “empowering homeless and disabled artists,” presented G-Block in the auditorium Friday as a part of the Kindness Day events at last Friday.
The block featured ArtLifting Director of Operations Katie Manzi and artist Scott Benner as guest speakers from the business.
Amidst the current issues of equality and diversity in the community, a “Where is the Love?” music video about tolerance that was produced by students from Newton North TV and Production preceded the presentation.
ArtLifting was created several years ago in order to help homeless and disabled artists sell their pieces, according to Manzi.
The company now markets additional products such as handbags and phone cases adorned with the pieces of art, opportunities made possible by “seeing someone for their talents, and not for their circumstances or for stereotypes,” as Manzi explained.
ArtLifting first started with three artists in Boston and is now present in 11 cities across the U.S., and it prides itself on helping those who need help the most, a motive that is best exemplified by Benner.
Benner used to work as a steelworker before his company closed in 2009. He then struggled to find work for several years, a difficult time span during which he was also diagnosed with Horner’s Syndrome, a disease that causes “cluster headaches.”
Benner soon found himself sleeping near South Station in Boston, with little but his drawings that he had accumulated since he was nine years old.
“Art is a place where I can make what I want to see happen,” Benner said. “My art sat in my portfolio for most of my life, and that is something that I will always regret.”
ArtLifting found Benner and helped him recover through his drawings, a heart-warming story akin to the theme of Kindness Day at our school. Benner now lives in Maine.
“Things have been getting better and better, and it’s because of ArtLifting,” Benner explained, adding that the opportunities given to him have altered his ways of “looking at the world.”
The block finished with questions from students in the audience, inquiring about the business and Benner’s fascinating story.