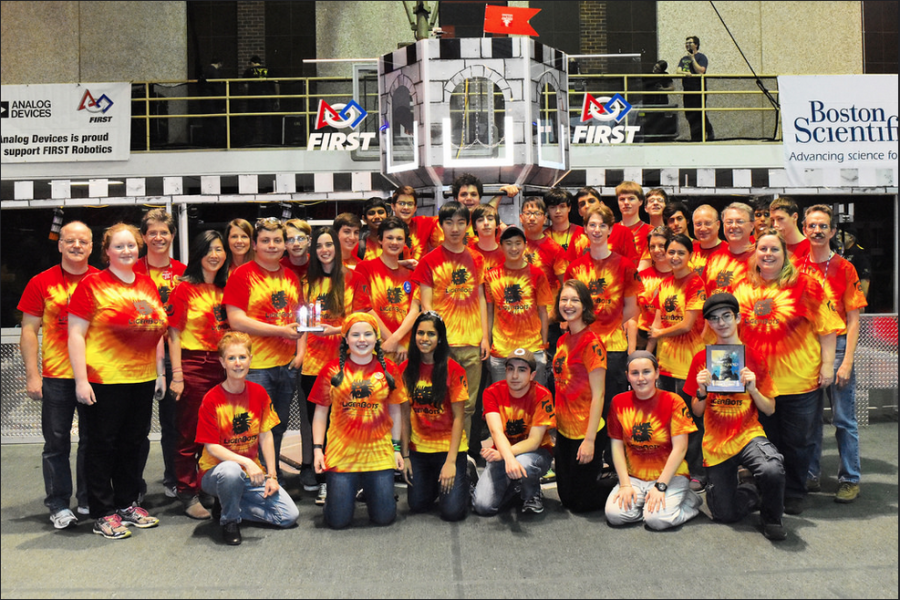 By Samantha Fredberg
Another successful season is taking shape for the Ligerbots following a successful first competition on March 12-13.
The Entrepreneurship award was awarded to the joint North-South robotics team for their strong business plan.
“Winning the award is a huge testament to the growth of the non-technical part of our team, and a huge affirmation of our accomplishments and success,” said senior Lily Gomberg, the chief marketing officer on the team.
In addition to the award, the team was picked as a first choice by one of the top Alliances, according to Gomberg. Each competition is between two Alliances, with three teams each. While initially organized by the competition officials, the top eight placed teams get to select Alliances in the finals.
“We probably have one of the best robots in the world, which sounds cocky. A lot of matches are posted online. Based on that, our robot is really good,” said sophomore Lauren Fitzpatrick, a member of the Ligerbots who works on marketing and outreach.
According to Fitzpatrick, Alliances are strong elements of FIRST Robotics Competitions (FRC), the robotics league that the Ligerbots participate in.
The team’s robot also outperformed many other teams in Stronghold, the competition game, because of it’s strong design and autonomous, according to Fitzpatrick.


Stronghold involves a field divided into three sections. Two Alliances each have a section and the middle is neutral ground. Leading to the neutral zone, the robots face a series of defenses.
“There’s a drawbridge you have to lift, things you have to push down in order to get through, a door that has to swing open, rough terrain, and a moat you have to get over. We were able to get through all of the defenses except for three, and there are eight total which is really good,” Fitzpatrick said.
Prior to competition season, the Ligerbots spent six weeks designing and building a competition robot with the goal of having it beat other robots in Stronghold.
According to the Ligerbots blog, members of the team worked on gaining new sponsors, completing essays, applying for awards, and writing grants.
Depending on how well the team does at their next competition, they will move on to a regional competition and then to the World Championships in St. Louis. Fitzpatrick added that the team has made it to the championship level for the past two years.
FRC is a robotics competition created by For Inspiration and Recognition of Science and Technology (FIRST) with the goal of invoking youth participation and interest in science and technology, according to the FIRST website.